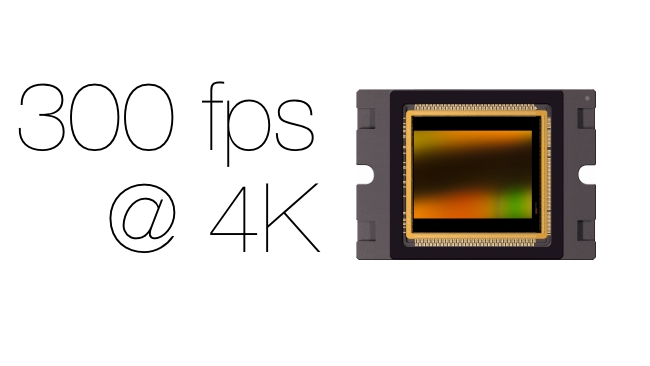 We thought the CMOSIS CMV12000 sensor was pretty outstanding when it could do 150fps in 4K but now they are releasing a new version of the same sensor capable of an incredible 300fps at 4K! Not only that but apparently the sensor can also do much higher frame rates at lower resolutions by doing partial read outs, windowing or sub sampling the sensor. I would love to know what frame rate this sensor can achieve at 1080p for example. All of this is on top of the fact that it is a Super 35mm sized sensor, with a global shutter.

When you aren’t running the sensor at higher frame rates it can dynamically reduce its power draw which may well help with keeping the sensor cooler as well. It draws only 3 watts when it is running full tilt at 4K 300fps. Apparently the sensor is happy at temperatures ranging from -30ºC and +70 ºC

Putting it into perspective

To put that 300fps into perspective, the original red one is only capable of 120fps at 2K resolution and until recently that was quite revolutionary. The Arri Alexa could only manage 120fps if you paid for an extra software license. High speed shooting was mostly the realm of specialist high speed cameras such as the phantom from Vision Research. Of course the Sony FS-700 changed everything with its wide range of high frame rates at a much more accessible price but it seems we are getting ever closer to the day when higher frame rates become far more common place. There is still the matter of data storage for your high speed footage but slow-mo type footage has traditionally been only used for short bursts anyway.

The CMV12000 is the sensor that the Apertus° project is using for their camera prototype at present so it is more than possible that they will turn to the newer faster version at some stage in the future.

This is an off the shelf sensor that any manufacturer can use though, so it looks like we are going to be looking forward to not just 4K becoming more available but higher frame rates becoming a non issue for productions in the future too.

Read: This could be the biggest advance in cameras in a decade