If you thought Hexacopters were manoeuvrable, just watch this 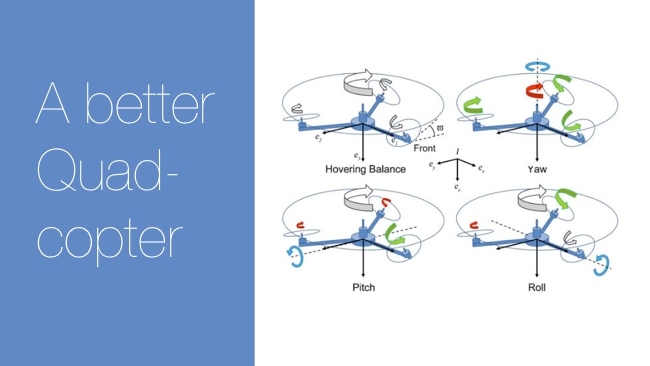 Most people assume that quad/hexacopters are built that way because they're easy to position in space. But wait till you see this

We're only writing this semi-seriously, because you won't want to subject your Canon 5D MK III to what you're about to see.

According to SPECTRUM, the journal of the IEEE, the assumption that "multi" copters are the best platform for miniature airborne antics, is wrong. Apparently the multi-motored devices are less powerful, efficient and manoeuvrable than a more conventional helicopter. But where they beat the conventional chopper is in simplicity, because they don't have to have complex, twisting rotor blades.

Researchers at the University of Queensland has suggested a better configuration all round would be three "satellite" rotors, and then one, larger, central one, whose rotors could change their angle of pitch. The smaller rotors could also have their angle changed, but only by changing the angle of their motor; individual rotor blades would not be movable.

This would give around 25% greater efficiency, according to the article.

Want to see just how manoeuvrable a conventional helicopter design can be? Watch the video after the break. And as one YouTube commenter dryly put it "don't try this with a Chinook!".