Can Cinematography be too good? 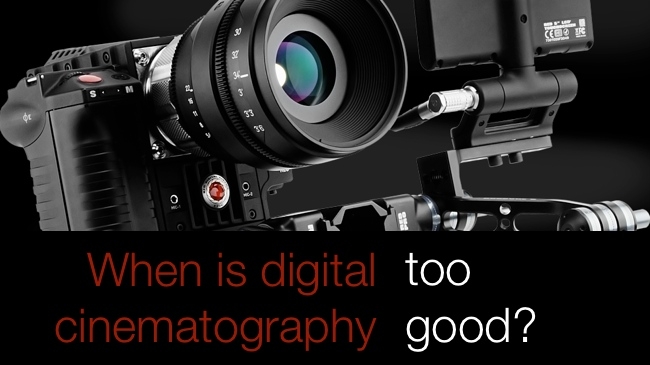 When is digital Cinematography too good?

Replay: Are we getting too carried away with glossy, beautiful, some might say pretentious looking productions, when often a simpler production style would be better?

This might at first seem like an incredibly stupid question to ask. After all as video and film producers we want our productions to look as good as they possibly can. Why on earth would we want something to look any less good than it possibly could be? I can visualise the hairs on the necks of many DP’s currently rising in response to me even putting that question forward!

I have often thought back to when a film called “Hero” appeared in the cinemas. “Hero” was a film in the same genre as “Crouching Tiger, Hidden Dragon”. It was certainly very beautifully shot, sublimely beautiful even, but there was an overriding criticism that was leveled at it by fans. Fans I might add who were used to watching other beautifully shot films of a similar vein from Hong Kong and China. The criticism being that they found the cinematography in the film to be pretentious.

I had never considered this before, and the idea that cinematography could be pretentious was an alien concept to me. I had always thought that a film or a video should look as beautiful as humanly possible within the constraints of the production budget.

Let’s take a quick trip back in time to around five or six years ago. Sliders were only just coming in as a way of adding much more of a cinematic edge to video production. For years us video guys struggled to get lovely cinematic film like sensibilities into our productions. Especially in the lower budget corporate sector where time and budget were highly restricted.

The development of the VDSLR and subsequent portable sliders meant that we could not only produce low budget corporate videos with a much more “film like” look in general, but subtle cinematic style moving shots were also now much easier to set up and shoot without much faff.

Camera movement has always been an obsession of mine. As soon as I could get hold of a Steadicam - actually it was a Glidecam - I leapt at the opportunity. The freedom to move a camera around freely and smoothly is liberating and opens up many creative opportunities.

Versatile lighting systems are now more accessible than ever too, opening up opportunities for ever higher production values even for videos with modest budgets.

Art is born from constraint and dies from freedom

However as the saying goes, art is born from constraint and dies from freedom. There is a certain irony in me quoting that, because on many types of shoot we need to forget that we are producing art! The idea that we are making art can be part of the problem. A quick look on sites like Vimeo reveals a vast number of amazing short films and examples of corporate promos. Many of them look fantastic, but they often lack a certain... something.

I am heavily into the outdoors, particularly white water kayaking. There is a large number of people out there now starting to make adventure sport vignettes with extremely high production values. Often shooting on cameras such as the Sony F55 or Red Epic mounted on increasingly clever, and not to mention risky shooting platforms, the shots that are being achieved by some of these productions are often breathtaking, and my hat goes off to them.

So what’s the problem here? Increasingly it seems that the idea of an actual story and the very function of the cinematography has been forgotten. The cinematography is often so good and highly polished to within an inch of its life that any evidence of soul is lost. Quite often the content of the video ends up serving the cinematography as opposed to the other way around.

In order to produce such beautiful shots a great deal of set up must be done. For a documentary such rigid and precise set ups quite often fly in the face of what should be presented. The production becomes robotic and soulless because that spark of spontaneity and character that would otherwise be present isn’t there.

The shots you use must suit the purpose and feel of what you are producing. Cinematography is much more than just making a shot look nice. The shot must serve the story, and it must be a part of presenting the personality and the energy of the piece.

A case in point is the example of a few product adverts that have been made over the years. Some of them look extremely amateur, clearly using a low cost camera in a location such as a shopping centre, while “members of the public” try out the product or give their comments.

As video producers our initial reaction to these adverts is to say how cheap and amateur they look, and how we could have done a much better, more polished job.

What we quite often forget is that such adverts have an expert marketing team behind them. The entire concept will have been planned and thought out via numerous meetings and brain storming sessions. In other words those marketing gurus know a lot more about what works than we do! Such adverts have been made to look like they do on purpose.

It is a clear case of the video shooting style, content, composition, and editing serving the final intention. Like it or loathe it there are cases where making things look cheap works to the benefit of the video. It takes confidence to be able to make such a decision because it is all too easy to try and attempt to make everything look as high end and as polished as possible.

What we have to remember is that the video we produce ultimately serves a purpose. More often than not that purpose is to deliver a message, a point of view, or an education. Sometimes the cinematography can actually get in the way of that message and be a distraction. Sometimes our cinematography needs to be functional rather than beautiful, and making the best decision about this canbe incredibly important.

A couple of years back I did some work for a large production company who had accounts with a number of well known high street names. Each year one company in particular would hold a major event. The production company told me how in the year previous they had filmed a major promo video as part of the event involving cars and explosions as well as extensive lighting.

It went down a treat, but in the following year the recession had hit. The client wanted another promo. They could afford to pay for a similar video to the previous year but they didn’t want to. They specifically told the production company that they did not want to appear to be spending money on high end expensive video in a time of recession. In other words not only did they want to spend less money, they also requested that the video didn’t look as expensive either.

The production company could have taken the lower budget and stretched it as far as they could to make things look as polished and as high end as possible. In the end due to the clients request they made a rather more modest affair. Still professional, but fulfilling the clients request not to make it look lavish.

Caught up in Technology

We can all too easily get caught up with using our latest gadget or toy, LUTs and SLOG, but cinematography, along with everything else in the production, should be driven by story and content motivations. By over stylising shots, using a dolly or a slider at every opportunity, or even using highly stylised grading and lighting when it doesn’t suit, the production can end up looking pretentious and distract from the message. If that happens then the production will have failed in its mission.

I can see a few people out there seething, possibly mis-interpreting what I am saying. I am not for a moment saying that highly polished cinematography shouldn’t be done, but what I am saying is that you should be asking yourself “What sort of cinematography is needed to best serve the production and deliver the message?”

As cinematographers we shouldn’t be too precious about about what we do!