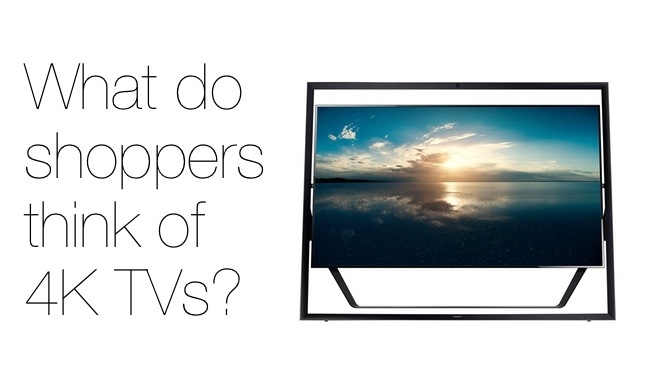 How is 4K being presented to the shopping public?

A few days ago I was in London and had a couple of spare hours to kill, so I decided to take my partner to see some 4K televisions. She's used to hearing me talk about 4K, virtually all the time, but, like most people who don't go to video industry trade shows or CES in Las Vegas, she'd never actually seen one.

We went into John Lewis on Oxford Street. It's an upmarket department store but one aimed at typical shoppers rather than the super-rich. They've always had an impressive TV and Audio department, and what they stock is a good indicator of current tastes and trends.

Since 4K is, at this early stage, still something of a minority purchase, I thought the store might have a solitary display just to introduce people to the idea. Ten years ago, they were rolling out HD and SD sets were still the staple faire fort the majority of customers.

So what did my Partner think of the 4K TVs and their pictures?

The Samsung 84" was impressive for its size, but it was showing a demo reel that was over saturated to the extent that it looked artificial. It wouldn't have looked good at any resolution, never mind 4K. In parts, the image was actually blown out, such was the gain applied to some of the colours. It was like watching an explosion in a paint factory.

She preferred the picture on the Sony. It was of a golf tournament, shot in 4K. The pictures looked more natural, and it was easier to relate them to the sort of thing you might see on a normal television. The additional sharpness close to the screen was very tangible.

The Samsung curved OLED screen in the middle was outstanding despite having a quarter of the resolution, although, again, there were issues with the demo material: an advertising slogan that appeared at the start of the reel looked blocky. I couldn't tell whether it was just a bad choice of resolution for the graphics, or whether we were seeing a genuine difference between the 8 megapixel per frame of the 4K TVs and then 2.5 megapixel per frame of the HD screen. Of course, the black levels and contrast were stunning on the OLED device.

We watched customers as the walked past the displays. Virtually all of them seemed impressed - not just by the pictures, but by the sheer "presence" of these beautifully engineered TVs.

When cheaper models percolate their way into the supply chain, I don't see any issues for this store in selling them.