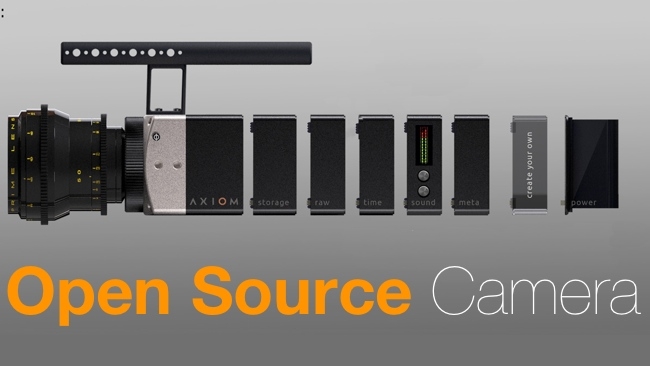 This whole project looks amazing. It's nothing less than the development of a completely modular 4K camera with a global shutter that records to Cinema DNG: so it will fit in with familiar workflows.

Editor's note: We think that this is an amazing and important new project, so to mark the announcement of the Apertus modular system, we've written two articles. This first one, by Freya, is an overview of the project, and this one, by me, is about the prospects for an open source, hardware-based camera project. (We've linked to this at the end of the article if you want to read Freya's piece first).

The frustration of locked-down proprietary camera firmware is one that many of us are familiar with. It’s pretty annoying to have a camera that could clearly be capable of all kinds of things but is heavily restricted by the locked-down software it is running. This is of course the origin of the Magic Lantern project, which was borne of the frustration of camera hardware that was capable of doing so much but was restricted by the built in firmware and the policies of the companies involved. It has taken a lot of work by the Magic Lantern team to gain access to the camera and to build an understanding of the way it functions, so that they could run their own software alongside the camera firmware and new features could be added.

All this and much more is the thinking behind the Apertus° Axiom project.

Apertus° are working on a 4K raw capable camera called the Axiom that will use open source software at its core - but they are also making the hardware it runs on as open as possible too. To get all this started, and as a kind of "proof of concept", they're building right now a much more limited prototype called the Axiom Alpha. It’s based on the same sensor as the full Axiom (the CMV12000) but it only shoots 1080p (downscaled from 4K) instead of the full 4K that the finished camera will provide. But it’s also based on FGPA technology just like the full 4K Axiom, so the idea is to use the Alpha prototype to get the basic software up and running before moving on to the final release camera.

Apertus° are not releasing full details of the full 4K Axiom camera yet (The Axiom Omega?) because much of it isn’t set in stone - as you might expect from a fully software updateable camera - but they have stated that it will be 4K, have a Super 35mm Global Shutter, have interchangeable lens mounts, be capable of 150fps at the full 4K resolution, and the biggest thing of all is that it will be fully modular!

There will be lots of different modules for doing different things and as it’s open you will even be able to design your own modules! (Subject to time and ability constraints of course) As it is a fully modular system, it means you can strip the camera down to the basic functionality you will need to keep it light and small. For instance if you don’t need sync sound you can just leave the audio module out altogether. On the other hand, if you need the power of the full camera system, it’s just a matter of plugging all the modules together a bit like lego! Of course as new technology comes along, that means you can add new modules as they become available. Perhaps all kinds of metadata will be available from the new MEMS chips and there will be new modules for that ...or an anti-grav module! Who knows what the future will bring?

It’s also planned that the camera will shoot raw in the cinema DNG format which is now starting to be widely supported thanks to its use in the Blackmagic cinema cameras and Resolve, so by the time it arrives it will hopefully be able to plug right into the existing workflows that are out there already.

Apertus° are looking for new developers to help take the project forward, especially anyone who already has FGPA experience and can help Apertus° to free cameras from the proprietary chains that are holding them back.

Read the Editor, Dave Shapton's views on the likelihood of this project suceeding