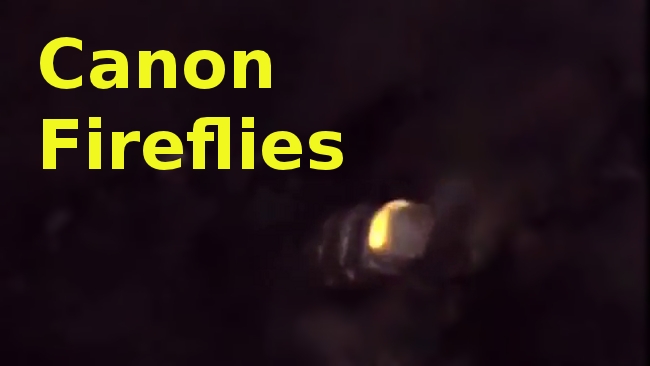 Canon have released a new video of their new extreme low-light capable sensor which showcases the ability to shoot Fireflies!

The new sensor is a 35mm full frame CMOS sensor developed by Canon with video capture in mind and uses new pixel and readout circuitry to reduce noise.

The fireflies are Yaeyama-hime fireflies and they are native to Japan's Ishigaki Island, which is just off the northeastern coast of Taiwan. The footage was shot after sunset in existing light which measured just 0.01 lux. At that kind of light level the human eye will struggle to make out much of the surroundings but the new sensor was able to pick out the light emitted by the tiny fireflies and the surrounding vegetation that makes up their home. The sensor was even able to give a good respresentation of the colour of the light that the fireflies put out, which is quite a feat given the fact that traditionally accurate colour representation is one of the first things to start falling apart in video low light modes.

Take a look at the video below, before viewing Canon's press release on the next page.

TOKYO, Japan, September 12, 2013—Canon Inc. has successfully captured video footage of Yaeyama-hime fireflies flying in darkness, a feat made possible by the high-sensitivity 35 mm full-frame CMOS sensor developed by Canon for video capture that was announced in March 2013.

The high-sensitivity, low-noise video-shooting capabilities of the dedicated 35 mm full-frame CMOS sensor1 for Full HD video capture were made possible not only through the integration of the high-performance sensor technologies employed in Canon's digital SLR cameras, but also through the incorporation of new pixel and readout circuitry technologies that reduce noise.

Using a camera prototype equipped with the CMOS sensor, Canon, in cooperation with ZERO CORPORATION,2 succeeded in capturing video3 of the Yaeyama-hime fireflies that inhabit Japan's Ishigaki Island, located off the northeastern coast of Taiwan. No artificial lighting was used during shooting, which took place after sunset amid the island's mountains. Despite an exceptionally dark shooting environment4 of less than 0.01 lux, a level in which the naked eye would have difficulty discerning surrounding objects, the CMOS sensor was able to capture not only the color of the light emitted by the fireflies, each of which measures only a few millimeters in length, and their movements, but also the surrounding vegetation in which the species lives. Plans call for the footage to be used to benefit future research into the Yaeyama-hime firefly.

In addition to astronomical and natural observation, Canon is looking into applying this CMOS sensor to medical research purposes as well as surveillance and crime-prevention equipment. Through the further development of innovative CMOS sensors, Canon aims to expand the realm of photographic possibilities while cultivating the world of visual expression.