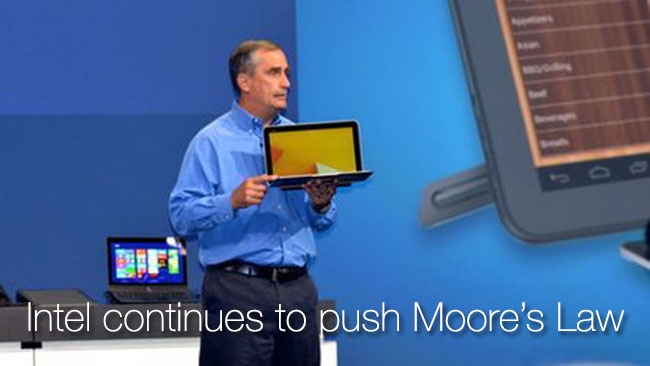 In 1965 Gordon E Moore, one of the co-founders of Intel, published a paper stating that the number of transistors in an integrated circuit had doubled every two years since their invention in 1958. He went on to predict that this would continue "for the next ten years" and nearly 50 years later Moore's Law as it became known is still holding true.

Each time the chip industry hits a barrier to the continued development of transistor counts a new technology comes along to break it. Recent developments have seen the chip ärchitecture fall from 32nm in the "Westmere" family to 22nm in "Haswell" and now to 14nm in the "Broadwell" family.

This means that more transistors can be squeezed onto a smaller area and the processor can operate more quickly whilst at the same time drawing less power.

Intels demonstration at the Developer Forum showed the latest processor running in a prototype Ultrabook and predicted that the manufacturing process was on track to get down to 7nm in the future.

Portable computers can have processing power that would previously only have been available in a desktop, without sacrificing battery life.

In the future the computers we use will be smaller and faster. They will use less power and generate less heat and they will be able to run on batteries for the whole day.

SSD drives will mean that there will be almost no moving parts which in turn saves power and makes the computer less susceptible to mechanical damage.

GPU's are also benefitting from increased transistor density and as software takes advantage of CUDA or OpenCL computing the speed that we can decompress, edit and process video files will increase.

We have our own sort of Moore's Law in post production, just when you get your computer fast enough to work on the current formats along comes a new one. This was true of the change from SD to HD and now with the change from HD to 4K.

How long before we have to start building computers to cope with 8K?