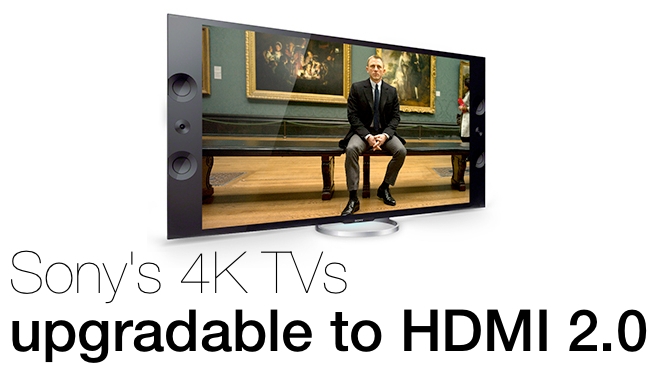 Sony's 4K TVs have been a stunning commercial success, but until now, buyers have been concerned that they might be saddled with an obsolete HDMI connection that can't handle 4K properly

HDMI 1.4 only only has enough bandwidth to handle 4K at 24 fps or 30 fps, which, while still giving 4K's stunning spatial resolution, will not allow the higher frame rates that future films might favour.

Sony has clearly been away from this and has been careful to avoid specific questioning on the subject, leading us to think that they might have a way of upgrading their existing (and already sold) 4K model line-up.

According to HDTVTest, Sony announced at Berlin's IFA show last week that it does have upgrade options.

Notably absent from this software upgrade option is Sony's magnificent 84 inch Bravia, the KD-84X9005. Sony will upgrade this for owners, who probably don't relish the thought of putting such a gargantuan TV in the back of their cars for the trip to the service centre, but it may not come to that if Sony offer to help with transport.

Sony is also offering to upgrade their 4K projectors as well.

All of this news is hot on the heels of Wednesday's announcements of Sony's 4K camcorders that are ready for a software upgrade to HDMI 2.0, and the HDMI 2.0 announcement itself.