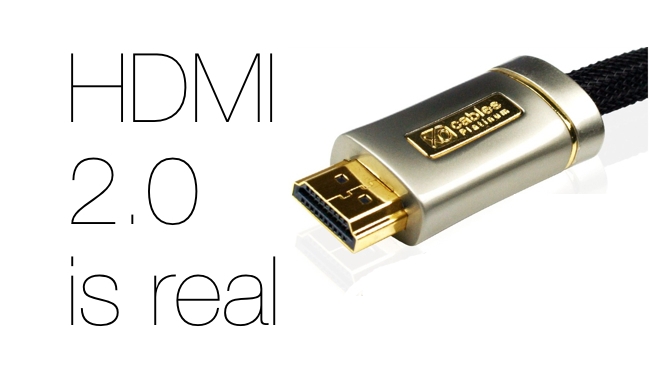 It’s a big day for 4K today. Sony’s announced prosumer and consumer 4K camcorders, and - at last - HDMI 2.0 is here.  It matters because this is the version of HDMI that 4K has been waiting for

HDMI was what HD needed to make practical sense to consumers. Analogue component cables were never going to do it, and nor did they make sense: digital video is digital and demands a digital connector. HDMI also carries multiple channel audio, so, with one shoelace-type cable, all your HD interconnectivity problems were solved.

It’s been astonishingly sucessful. According to the HDMI forum - the body that oversees the standard - over 2 Billion HDMI devices have found homes with consumers and professionals alike.

And even though professionals don’t like the connector - because it doesn’t latch - there’s no doubting the fact that HDMI carries the same quality of signal as SDI, just differently.

But even the most recent version of HDMI, 1.4, was struggling to deal with 4K and UHD. It’s not surprising: these formats call for around 4 times the data rate of HD. Flexbility in HDMI 1.4 meant that you could squeeze 4K at a maximum of either 24 or 30 Hz down the cables, but there was no chance of 50p or 60p.

But now there is. Higher resolutions go hand in hand with higher framerates. And now we can have them thanks to the new standard.

The headline specifications are: 18 GBit/sec, 32 channels of audio, and 4K resolution at 60p.

And this isn’t just a theory. Sony has already announced that their two new 4K consumer and prosumer camcorders will support HDMI 2.0 - with a firmware update. Which begs the question: all those 4K TVs that Sony has been selling - are they going to be upgradable too?

BERLIN, Germany - September 4, 2013 – IFA 2013 – HDMI Forum, Inc., a non-profit, mutual benefit corporation, today announced the release of Version 2.0 of the HDMI Specification.  This latest HDMI Specification, the first to be developed by the HDMI Forum, offers a significant increase in bandwidth (up to 18Gbps) to support new features such as 4K@50/60 (2160p), which is 4 times the clarity of 1080p/60 video resolution; 32 audio channels; as well as dynamic auto lip-sync and extensions to CEC.  The complete Version 2.0 of the HDMI Specification is available to Adopters on the HDMI Adopter Extranet.  HDMI Licensing, LLC will host a press conference to discuss the new features of the HDMI 2.0 Specification at IFA 2013 in Berlin on Friday, September 6 at 12:00pm in the TecWatch Forum area of Hall 11.1.

Version 2.0 of the HDMI Specification, which is backward compatible with earlier versions of the Specification, was developed by the HDMI Forum’s Technical Working Group whose members represent some of the world’s leading manufacturers of consumer electronics, personal computers, mobile devices, cables and components.  The HDMI Forum currently has a membership of 88 companies.

“The introduction of the HDMI 2.0 Specification represents a major milestone for the HDMI Forum,” said Robert Blanchard of Sony Corporation, president of the HDMI Forum.  “Our members collaborated closely to take the highly successful HDMI Specification to the next level by expanding audio and video features for consumer electronics applications.”

“We are pleased to continue our work in supporting the HDMI Adopter base as well as the entire HDMI ecosystem,” said Steve Venuti, president of HDMI Licensing, LLC.  “Adopters can now continue to develop new product functionality over the HDMI interface as well as look to HDMI Licensing, LLC as their single contact for all their licensing and administrative needs.”

Version 2.0 of the HDMI Specification does not define new cables or new connectors.  Current High Speed cables (category 2 cables) are capable of carrying the increased bandwidth.