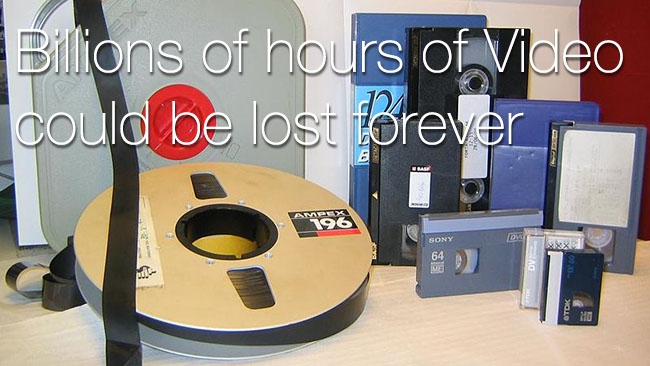 2 minute read
Just some of the tape formats

Replay: Around the world, billions of hours of video footage are sitting on shelves or in archives. Most of it may be of very limited interest, but some of it is a vital part of our cultural history. This footage is under threat from two sides: not only is the tape that the recordings are stored on degrading, but the machines required to play them back are slowly disappearing

The pace of technological change moves ever faster and as we gleefully grab hold of the next shiny gadget we sometimes forget about our older toys. Since the 1960's video has been recorded onto magnetic tape in a bewildering array of formats and although a lot of it has been destroyed or recorded over there are still billions of hours of footage sitting on shelves in archives, post houses and peoples homes. In 2008 the Training for Audiovisual Preservation in Europe Project asked 374 libraries how much material their archives contained. The total was 8.8 million hours! 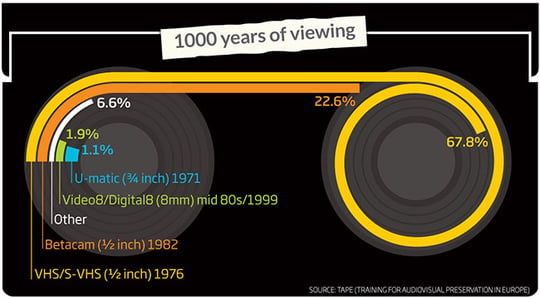 Physically the recordings on these tapes are deteriorating, depending on the storage conditions the tape itself may break down and the strength of the magnetic fields in the particles will fade and can be affected by electrical and magnetic interference.

But this is not the only problem, many of the recording formats are unique and can only be played back on the particular type of recorder that they were originally recorded on. Many of the older recorders have not been manufactured for decades and spare parts for the ones that do survive are getting harder and harder to find.

Keepers of the obselete

Luckily there are some people who keep these obselete recorders running and use them to transfer old material onto newer formats. In America one of these is George Blood, who owns a digitisation company based in Philadelphia.

"There are no technologies on the horizon so that when you can't play format X, somebody in a lab will be able to figure out how to play it, so we are constantly searching for machines and spare parts to play back older video formats. Sometimes the ones that remain are sitting in somebody's closet," he says. "I once bought a truckload of 2 Inch Quad recorders from somebody who had been stockpiling them in Burbank"

In Europe there is the Laboratory for Antiquated Video Systems, based at the Karlsruhe Centre for Art and Media in Germany. Founded in 2004 they have so far managed to acquire and resurrect around 300 video recorders capable of playing 50 different formats, using machines and parts donated by Studios and collectors or even bought on eBay.

The Laboratory accepts requests for digitisation of material from all over the world, in exchange for being able to show the material in their Museum, a sort of Digital Noah's Ark. They have worked with MoMA and the Centre Pompidou in Paris but their capacity is limited and they can only manage about 10 per cent of the projects they are offered.

If you have a library of old video material maybe now is a good time to think about transferring it to a digital format (although that also raises some questions). Better yet, if you have any old video recorders that you no longer need maybe you could donate them to a good cause and allow them to be used to transfer other peoples material.