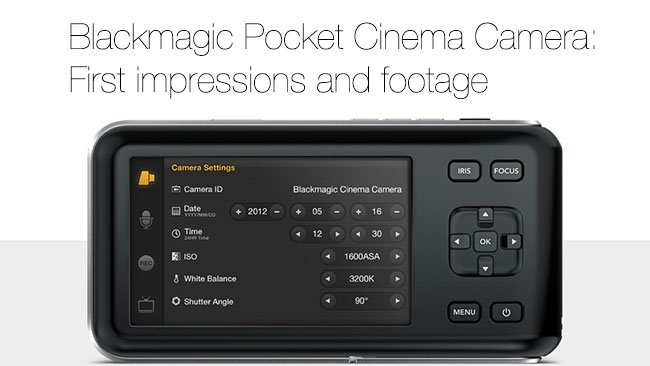 Last week I was very fortunate to be able to borrow a Blackmagic Pocket Cinema Camera for the afternoon. I was meeting my daughter in Camden Market so I took the camera along and shot some bits and pieces. I have uploaded the footage to Vimeo

When I was asked if I would like to borrow the Blackmagic Pocket Cinema Camera for the afternoon I couldn't believe my luck, I had experimented with the original Blackmagic Cinema Camera last year and could not wait to see how the pocket version compared to it.

First impressions on taking it out of the box were very good, the camera is small but fits comfortably in your hands, it is solid and has a nice weight to it. It certainly looks and feels very well engineered, even the buttons are solid and have a positive action, they feel like they will last.

The screen is crisp and bright and does not suffer as much from reflections as the Cinema Camera screen. It is not a touch screen like the larger Cinema Cameras but the navigation buttons make it very simple to operate.

The menus are the same as the Cinema Camera, with four screens covering Camera settings, Audio settings, Recorder settings and Display settings. Unfortunately the version of firmware on the camera did not allow me to shoot in RAW so I had to shoot in ProRes.

On the left hand side of the camera are connections for Lanc remote control, a 3.5mm Headphone jack, a 3.5mm audio input jack, micro HDMI out and 12v power input. I was a little surprised to see that the camera does not come with a micro HDMI cable or a micro USB cable which you will need for firmware upgrades but I suppose they are easy enough to pick up.

On the bottom of the camera is a standard 1/4" thread mounting hole and a small door that opens to reveal the removable battery, SD card slot and a micro USB port for firmware upgrades. The SD slot supports SDHC and SDXC cards for recording which can be formatted HFS+ for Mac or ExFat for Mac or Windows. At the moment the only cards which are recommended by Blackmagic are the SanDisk Extreme and Extreme Pro in 64GB and 128GB sizes. To transfer footage from the card you will need to remove it from the camera and plug it in to your computer so make sure you have a fast SD card dock.

The top of the camera also has a 1/4" mount, transport controls for playing back clips on the camera and the Record button.

Because the right hand side of the camera bulges to accomodate the battery it sits very nicely in your right hand with the record button under your index finger.

On the back of the camera as well as the display and navigation controls are buttons for focus, Iris, Menu and Power. If you have a lens with Autofocus pressing the focus button once will trigger Autofocus, pressing it twice will switch on "peaking" on the display which highlights crisp edges in green. If your lens does not support Autofocus pressing once switches on peaking.

The Iris button has two modes depending on whether you have chosen "Film" or "Video" range for your material. In Film range the Iris button will set your exposure to the brightest highlight in the shot, in Video range it will set an average exposure for the shot.

The camera came with a Panasonic Lumix 12-35mm Lens, which is a Micro Four Thirds lens with Autofocus and Optical Image Stabilisation. I was impressed with the images from this lens but I did have some problems with focussing. This might have been the early firmware in the camera or it might just have been me. Pressing focus would usually focus the lens far too close so I was forced to manually focus the lens. The focus ring on the lens is a continous travel model, with no end stops, so it was sometimes difficult to find the correct focus. I'm sure if I had more time with it I could get used to it but I found it a little awkward.

The Optical Image Stabilisation is very good but of course, because the camera is so small, every little bump and shake will show. I tried taking some shots whilst walking but the results are pretty shaky.

Apart from that I was very impressed with the results from this tiny camera. It's remarkable to see what can be produced from such a small device and especially at this price it's a real bargain.

Because the camera is so small nobody paid me much attention, I was just another tourist taking snapshots so it made it easy to shoot without disturbing people. The camera, charger, spare battery and a couple of lenses would easily fit in a small camera bag and be easy to carry around all day, not something you can say about most cameras of this quality!

I would recommend the Blackmagic Pocket Cinema Camera to anyone who wants a small, lightweight camera that gives excellent results in difficult circumstances. I'm sure if I had been able to shoot in RAW mode it would have been even better. I have uploaded the video to Vimeo and I would like to apologise for the quality of the shooting. I'm not primarilly a cameraman so think of this as worst case scenario. I have just taken the footage into Resolve Lite and tried to balance it.

Editor's note: We know this footage is soft. it was literally a case of Neil being handed the camera and being asked to "get some clips". We'll be reviewing this again when we have more time with the camera. I tried the camera myself and found the footage soft. I'm pretty sure it was because of unfamiliarity with the lens and focusing system. Please don't take this footage as representative of what the camera is capable of - it's representative of what happens when you don't have enough time to familiarise yourself with the camera. We still think the footage looks nice and shows great promise.