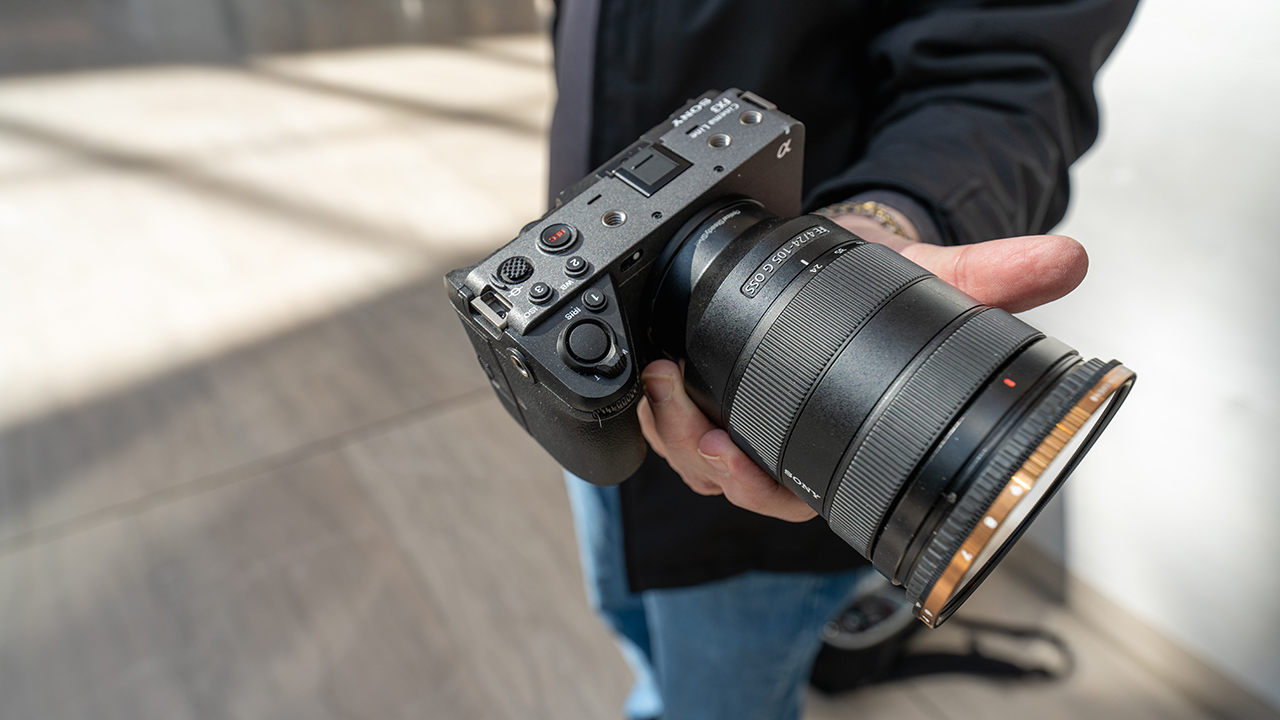 We were given early access to the new Sony FX3. Ahead of our main review, here's Ned Soltz's early impressions of the device.

I’ve had an advance demo unit of Sony’s FX3 for the past week. And I have been awaiting today’s release so that I could share some first impressions, to be followed by a more complete review and footage in a few days.

Sony actually briefed a small number of us in early February and started shipping the few demo cameras they had available in the US, all under strict NDA. Nonetheless, the leaks sprung and the FX3 announcement wasn’t the total surprise that Sony had hoped it would be.

The first point that Sony stressed is immediately apparent when unpacking the camera. With its textured gray exterior and Cinema Line livery, this is clearly designed to fit into the FX6, FX9 and VENICE family. The FX3 is presented as a tool with performance in the Cinema Line with a small size/weight for what was called “compact cinematography.”

We’ll assess those assertions over the course of this first impressions article and then in more detail. 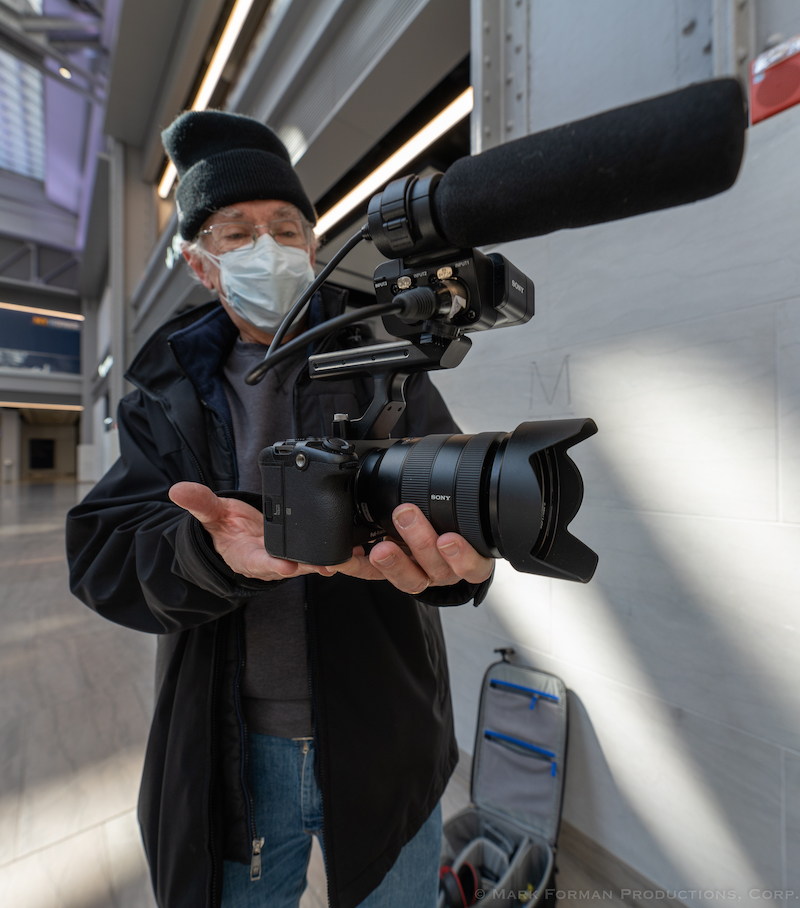 The FX3 shares much of the a7sIII/FX6 DNA as is apparent in the published specifications. But what is striking at first glance is not just the Cinema Line designation and matching exterior materials but also the presence of mounting points—three on top, one on either side and one on the bottom. These points are anchored into the interior frame of the camera for durability and obviating the need for a cage. Of course, some users would still want a cage.

Side doors for full size HDMI, mic input, headphone out, USB-C and USB-multi are positioned identically to the a7sIII as are the media and battery compartments.

The rear screen is near identical to the a7sIII. Now this is where there may be concerns with some users (and again, I’ll detail this in my upcoming review). The screen flips out like its hybrid camera cousin and tilts. I would much prefer in a video camera to have the articulating screen like other Sony mirrorless cameras had, allowing a downward tilt for shooting over my head. Furthermore, the flip out screen’s tilt is limited by cables if mic, headphone, or USB ports are populated.

You might call the FX3 a headless a7sIII and that is another area where some users may find limitations. The absence of the EVF is somewhat disconcerting, a critique that many also leveled toward the FX6. Of course, there is nothing to prevent using one of the several USB third-party EVF’s on the market. But power will be an issue and would require some kind of rig for battery.

As I will note in the more complete review, the rear screen is identical to that of the a7sIII and while I am unable to measure its nit brightness, it is difficult to shoot in outdoor light and almost impossible to compose in bright sunlight. 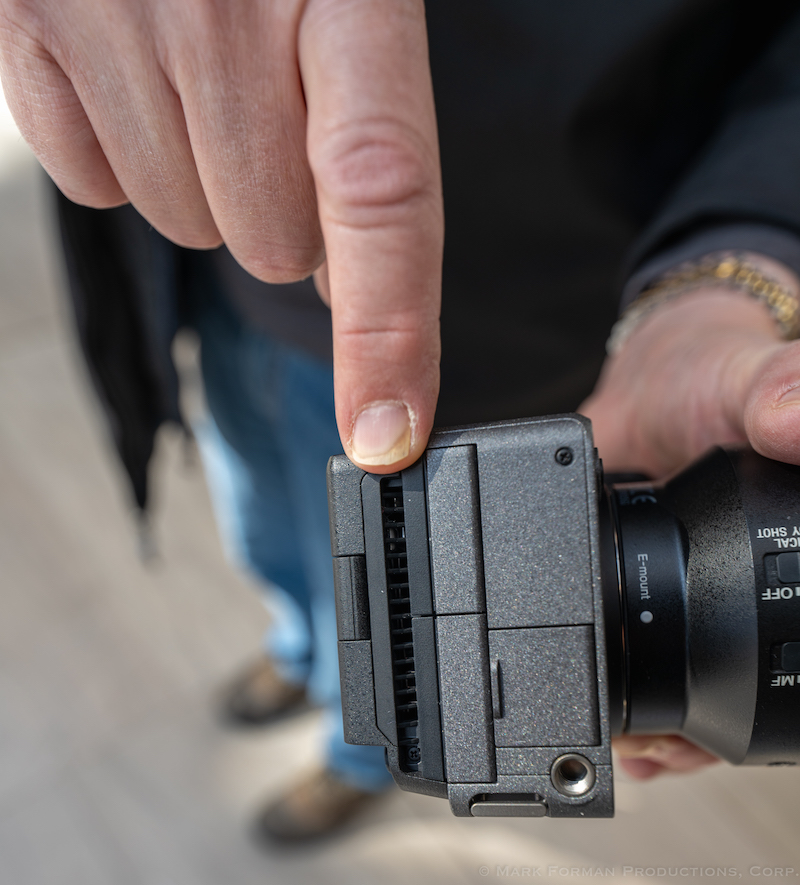 The cooling vents next to the LCD display on the FX3. Image: Mark Forman.

Another first impression that builds its chops as a cinema camera are vents under and to the left of the screen. Yes, it has a fan. It effectively means that you can shoot as long as you have power and sufficient media. When compared side by side with the a7sIII, the screen housing protrudes somewhat. That’s for the fan outlets.

Buttons are configured for video shooting, but of course can be customized. With record buttons on top and on the bottom left front, start/stop feels natural. The joystick is also on the top of the camera. The back has an on-off switch as in the cinema cameras, while in the usual on-off position of hybrid cameras you’ll find a zoom rocker encircling the shutter button. The shutter button, by the way, is for still image capture. The camera supports all of Sony’s motorized zooms as well as 2x clear image zoom with manual zoom and prime lenses. This has long been a Sony feature since the introduction of clear image zoom several years ago.

Standard with the camera is a handle (also with mounting points) and an XLR audio module like the XLR-K3M meaning it is a digital interface with A to D converters for the dual XLR inputs. Holding the camera by this handle is very balanced.

Alas sorely lacking—built-in ND. But in the next part, I’ll tell you about my great experience with Polar Pro’s variable ND with hard stops. 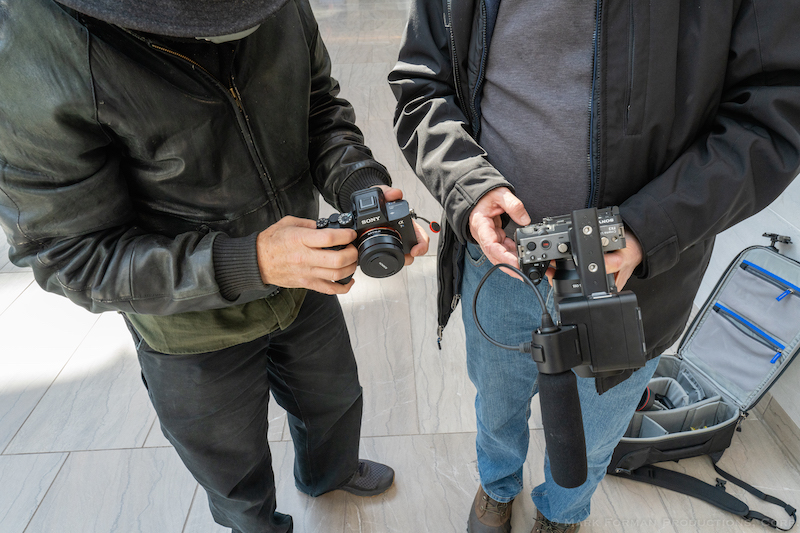 The Sony FX3 next to the a7III. Image: Mark Forman.

FX3 shares Sony’s new menu structure with the a7sIII and this includes video shooting modes. It does share the S-Cinetone Gamma (PictureProfile 11) with the rest of the Cinema Line cameras. More to come about S-Cinetone but again it positions the camera as an adjunct to the other 3 cameras in the line that share this gamma.

But because its stem cells (to continue that DNA metaphor) are from the hybrid camera side, we do not have the CineEI/Custom set up of the big kids. And there is no shutter speed or shutter angle option. Coming to mirrorless camera shooting from the digital cinema side of things, this was perhaps one of the more difficult adjustments I had to make. I feel much more comfortable under normal shooting circumstances just setting a 180-degree shutter and forgetting about it.

Summary of initial impressions—My a7sIII is a hybrid camera, that is in my thinking a still camera that can shoot video. And in the case of the a7sIII very credible video in line with the kind of working I find myself doing now. The FX3 is a video camera with the same image characteristics of the a7sIII that also has still capabilities. It can be used as is, used with the included handle/audio module, rigged on a gimbal or professional drone, in a car or tight spaces. It feels sturdy and well balanced although I wish the screen was vertically articulating.