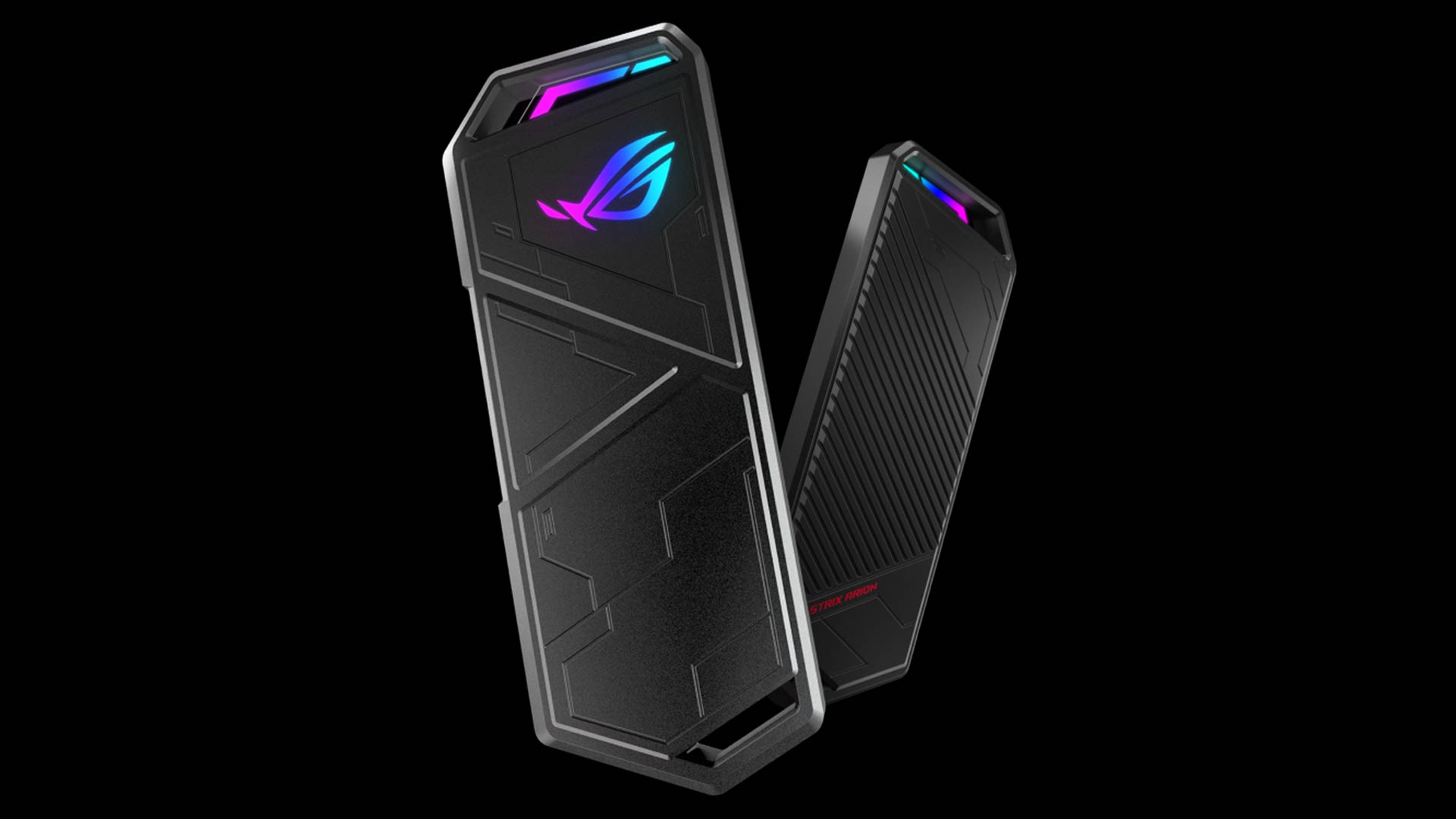 I am always on the lookout for fast storage to support my workflow. I especially need this when working on location shoots or even when moving around a large amount of data. In the past I was primarily using units such as the Samsung T5 storage. These solutions were extremely fast and could be attached to my camera and then to my laptop computer. They are small and reliable. I did find however that I was limited to certain resolutions and formats on some models. This was due to the limited read and write speed.

I then found the ASUS ROG Strix Arion which is a M2 NVMe SSD enclosure. I found that when this was fitted with a NVMe storage module, I had lightning fast data storage in the palm of my hand. What sets this enclosure apart from the others on the market is the robust design and unique thermal cooling. This enclosure is part of the ASUS Republic of Gamers product line also known as ROG. The Republic of Gamers product line consists of Laptops, Mother boards, Graphic Cards, Smart Phones and Monitors aimed at the requirements of Gamers. However since the requirements of Gamers are very demanding, many of their products are also used in the post production industry.

In the past I’ve checked out many NVMe storage units and enclosures. I found that certain units had performance issues when they became too warm. The Strix Arion solves this with a unique set of thermal pads that do an excellent job of heat dissipation reducing temperatures up to 26C. This helps with maintaining transfer speeds and of course helps with the life span of the storage module. 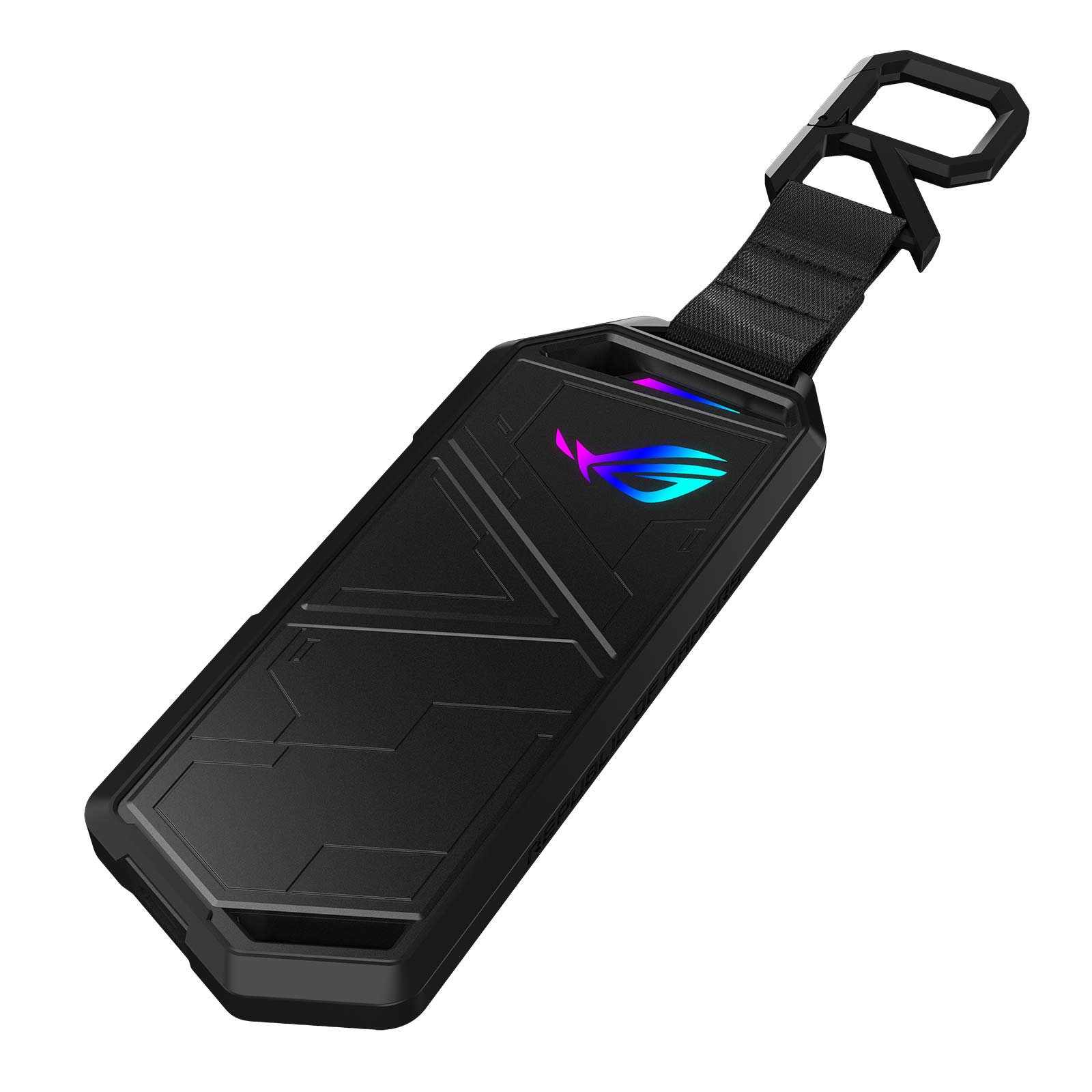 When I received the Strix Arion, it arrived in a very stylised box with a carry clip and a special tool for opening the enclosure. It also comes with both USB-C to USB-C and USB-C to USB-A cables. I’m using it along with the Western Digital Blue SN550 1 TB NVMe module. Opening the unit was a simple task when using their special tool. It’s important to read through the instructions completely before installing the NVMe module. It was a simple task to plug in the module and tighten the lock down screw. Afterwards I closed the enclosure and fitted the rubber bumper around the unit. Following this I was all set to go. All setup work can be done without the use of a screwdriver. 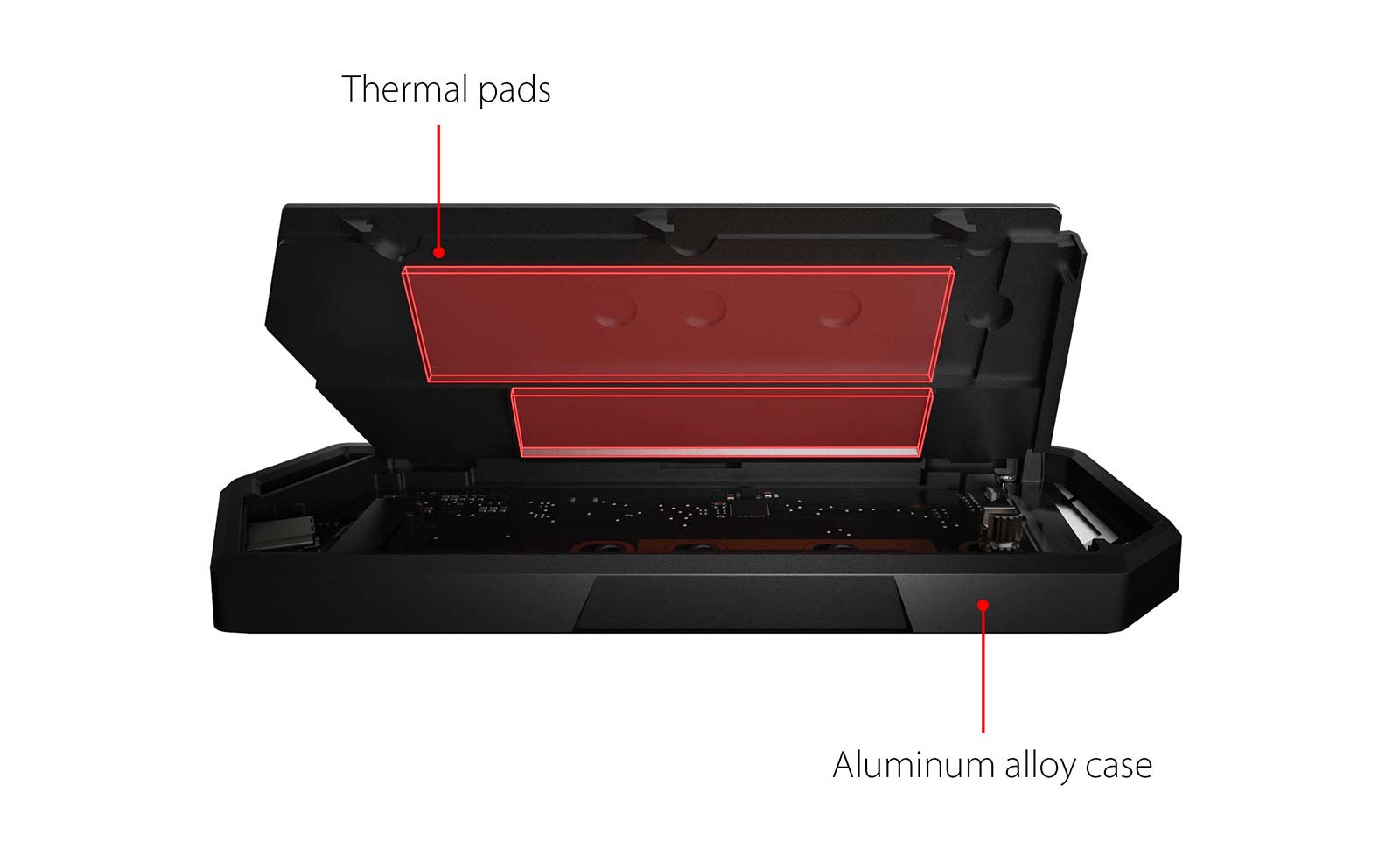 Thermal Cooling pads within the enclosure.

The enclosure supports M2 NVMe modules up to 2TB (2230, 2242, 2260 and 2280 form factors) with USB-C 3.2 generation 2 connectivity. Weighing in at a mere 98 grams, the enclosure has a communication speed of up to 10 Gbps. Depending on the module fitted to the enclosure, read speeds can go up to 983 MB/s and write speeds up to 979 MB/s. I opted for the Western Digital module and I got read and write speeds as seen in the graphic below.

The case may look futuristic but it’s not only there for cosmetic purposes but also has the added function of assisting the heat dispersion during use. The unit also contains an ASMedia 2362 PCI Express to USB 3.1 bridge chip that provides the high bandwidth of up to 10Gbps. This chip also provides faster read speeds, better sustained performance and cooler temperatures compared to other chips.

I tried the storage enclosure in different parts of my workflow. The most demanding was using it as a storage when shooting. I primarily used the Samsung T5 storage together with my Blackmagic Pocket Cinema Camera 6K. This combination worked well but was limited to primarily 4K UHD depending on the storage model selected. I decided to try the Strix Arion and the results were fantastic. I shot a 30 minute interview in 6K Blackmagic Raw and the storage worked perfectly. It was still quite cool even after 30 minutes of writing to the NVMe. I shot two more interviews using the storage and it was great. There were no dropped frames and the storage remained cool throughout the day.

I later disconnected the storage from the camera and connected it to my workstation where I previewed and edited the media. It looked great and I was able to either playback directly from the unit or quickly copy the contents to my local RAID storage. I also tested the unit together with my Blackmagic ATEM Mini Pro switcher as a record device. It also worked perfectly but this was extremely simple for the storage as it was only being fed a high definition signal. So to summarize, I found that the Strix Arion was extremely easy to setup and use. The performance was fantastic and is so nice and compact, it can be easily transported in your pocket.