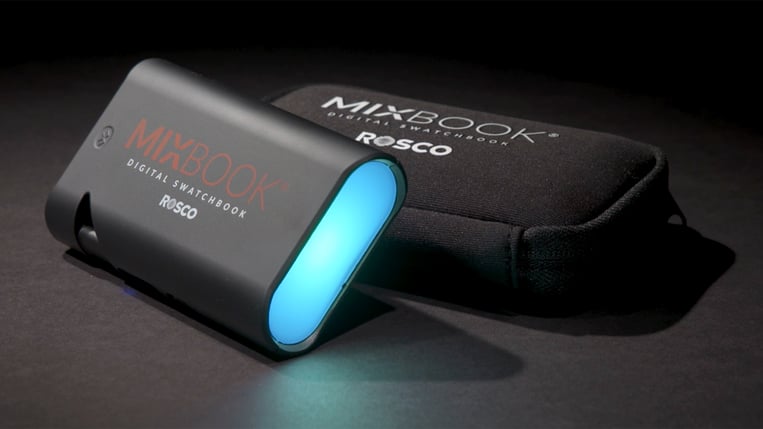 Review: As mixable LED lights have increased in popularity, so the humble lighting gel is being used less. The Mixbook is a digital solution to an old problem for the latest lighting systems.

Human beings can tell colours apart when they’re side by side. A few seconds later, trying to remember which was which, we’re clueless.  That’s why lighting designers carry gel swatchbooks, because only way to specify a colour absolutely is to carry an example of it, to have an object in your pocket. Rosco’s Mixbook is an attempt to bring that idea into the twenty-first century.

In essence it’s a pocket-sized microcosm of the technology that Rosco DMG put in their Mix series of LED panels. It connects via bluetooth to the same cellphone app – available for Apple or Android devices – and works in much the same way.  The Mixbook is actually powerful enough to be a viable light for little desktop setups or as an eye light on camera, like an Aputure MC. More or less the full capability of the Mix app is available and it’s possible to play with colour, intensity, CCT, green-magenta shift and all the other tweaks and adjustments just as on the larger light (the only thing it doesn’t implement are the animated blinking light effects.) 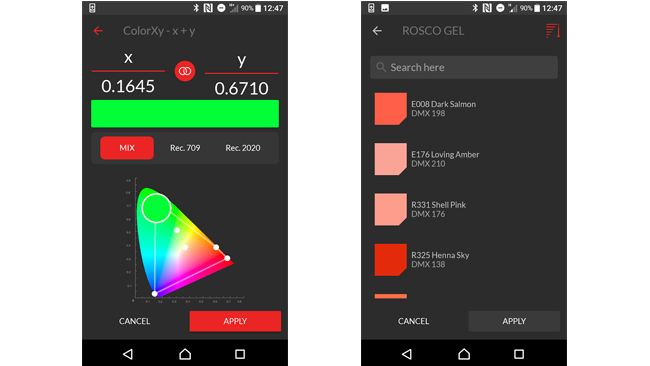 Two separate views of the Mix application, with the CIE 1931 at left in unrestricted 'mix' mode, and the Rosco gel swatch at right

There are a variety of ways to arrive at a colour, including Rosco gels, hue and saturation controls, or CIE 1931 xy coordinates.  The CIE option can work within Rec. 709 or 2020 limits, which creates an interesting opportunity to compare the two greens and realise what an improvement 2020 actually represents.

The gel swatch retains the option to specify whether to simulate the colour as illuminated by either 5600K or 3200K light.  What’s particularly nice is the ability to take the gels and tweak hue and saturation within a limited range, which satisfies the common demand for “that, but less.”  The only limitation is that, being a Rosco product, it implements Rosco gels.  There is a source match option though it relies on the cellphone’s camera, which naturally is not a precision colour meter.  If you want to accurately match a real world light source (potentially including another manufacturer’s gels), use a real colour meter and type in the CIE 1931 xy numbers.

How accurate is the Mixbook? 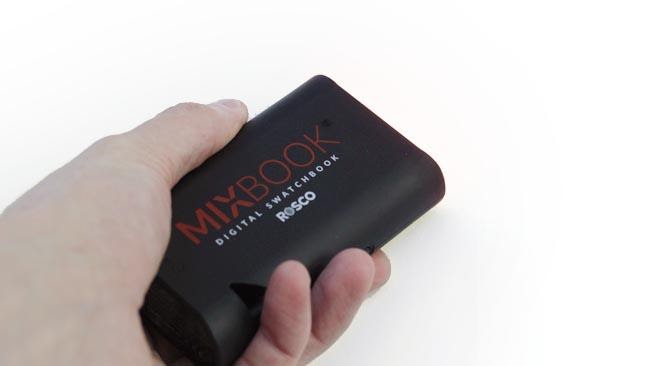 The diminutive Mixbook is small enough to lose in a pocket, and charges from USB power

In practice Mixbook can be more than just a digital swatch, because it’s a light emitter.  You can’t use a gel swatch to evaluate what the fall of a specific type of light looks like on a piece fabric, for instance, unless you happen to have a nicely-calibrated flashlight to shine through the gel.  Thus, Mixbook is just as relevant to costume, makup, and anyone else working for a production designer.  Colourists might find themselves sitting in a grading session that the cinematographer can’t attend, wondering what colour something was really supposed to be.  With a Mixbook, it’s possible to save a preset out of the device, send it to someone in an email saying this colour, and look at it. 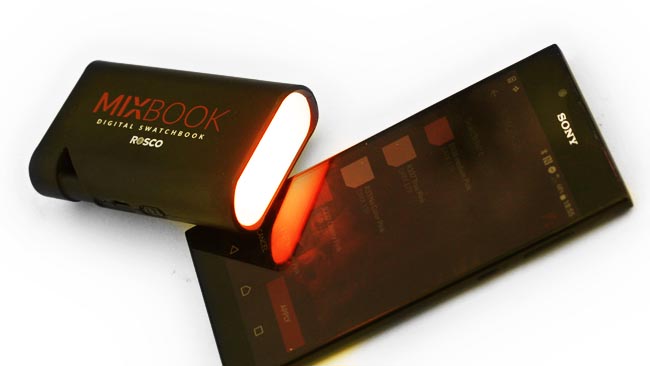 Speaking of calibration, I placed the Mixbook in front of a colour meter (a UPRTek CV600, in this case). It’s difficult to meter the saturated colour modes in LED lighting until the standards are more widely implemented, but in white mode the 3200K meters at 3401K, with TLCI 96.2 and TM-30 Rf of 95.8. The xy coordinates are 0.3999 by 0.4163, representative of a very small plus-green shift. It’ll be no surprise, given DMG’s six-emitter design with what looks very much like a phosphor-converted red, that the R9 colour patch is well-illuminated at 88.  With 5600K selected, the Mixbook reads at 5834K. TLCI is a healthy 92.9 and TM-30 Rf is 88.7.

Particularly at higher CCTs, the spectral distribution shows a characteristic lack of output around 480nm, which is common to practically all LED lighting and will only be solved once we have effective short-wavelength emitters capable of driving a phosphor-converted blue – though that will, of course, compromise the maximum saturation of blues.  That’s a choice faced by the whole LED lighting industry. 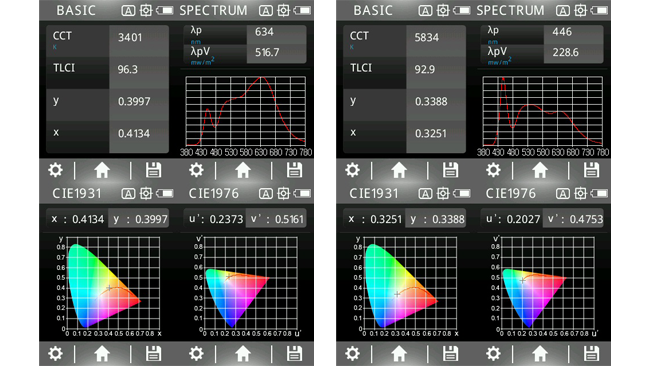 Meter readings at 3200K (left) and 5600K (right) as selected in the Mix application. Note the characteristic lack of green-turquoise around 480nm, which most LEDs have, but performance is otherwise top class

Humans are not the best judges of colour

Let’s reiterate that it’s notoriously difficult to accurately describe colours to someone else, or even to reliably remember what they look like.  Experiments have been done on the subject.  Volunteers were shown a reference colour, then shown a collection of similar colours and asked to identify which one matched the reference.  The results showed that it’s more or less impossible to do that after just a few seconds of delay.  Humans have an amazing ability to tell colours apart when they’re side by side, but a very poor ability to remember them, much less describe them to someone else accurately over the phone.  Mixbook solves that.

It would have been easy for the company to pitch Mixbook at a rather exclusive market, the sort of production where it’s a matter of contractual obligation to render the product packaging accurately. Happily, it sells for around £100, which makes it a pretty accessible technology.  It’s the sort of technology that only works if everyone involved has one, and at this price, that’s doable.  Part of the way that price has been achieved is that there is no user interface on the Mixbook itself – it can only be controlled by the phone app – but that’s fine. 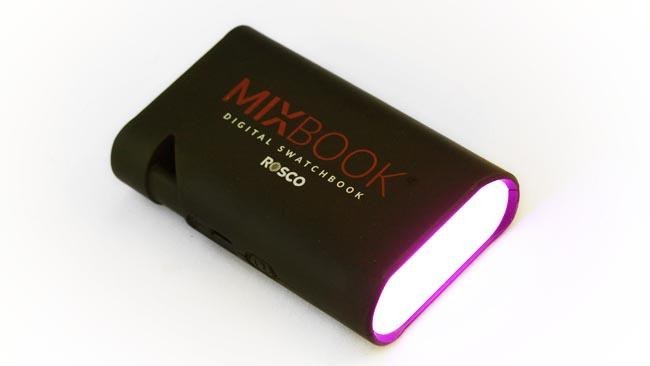 In the end, Mixbook Digital Swatchbook is something that makes perfect sense in the context of Rosco’s acquisition of DMG Lumière.  The intent was clearly to offset a clearly-imminent downturn in the use of filter gels in lighting and if we’re going to have colour mixing lighting it’s natural enough to have a colour mixing swatchbook. It’s a device for a very specific situation, but in that situation it does a lot of useful things.

The Mixbook is priced at £96. Find out more on the DMG Lumière website.