Review: This LitraStudio RGB LED light does a lot more than you think 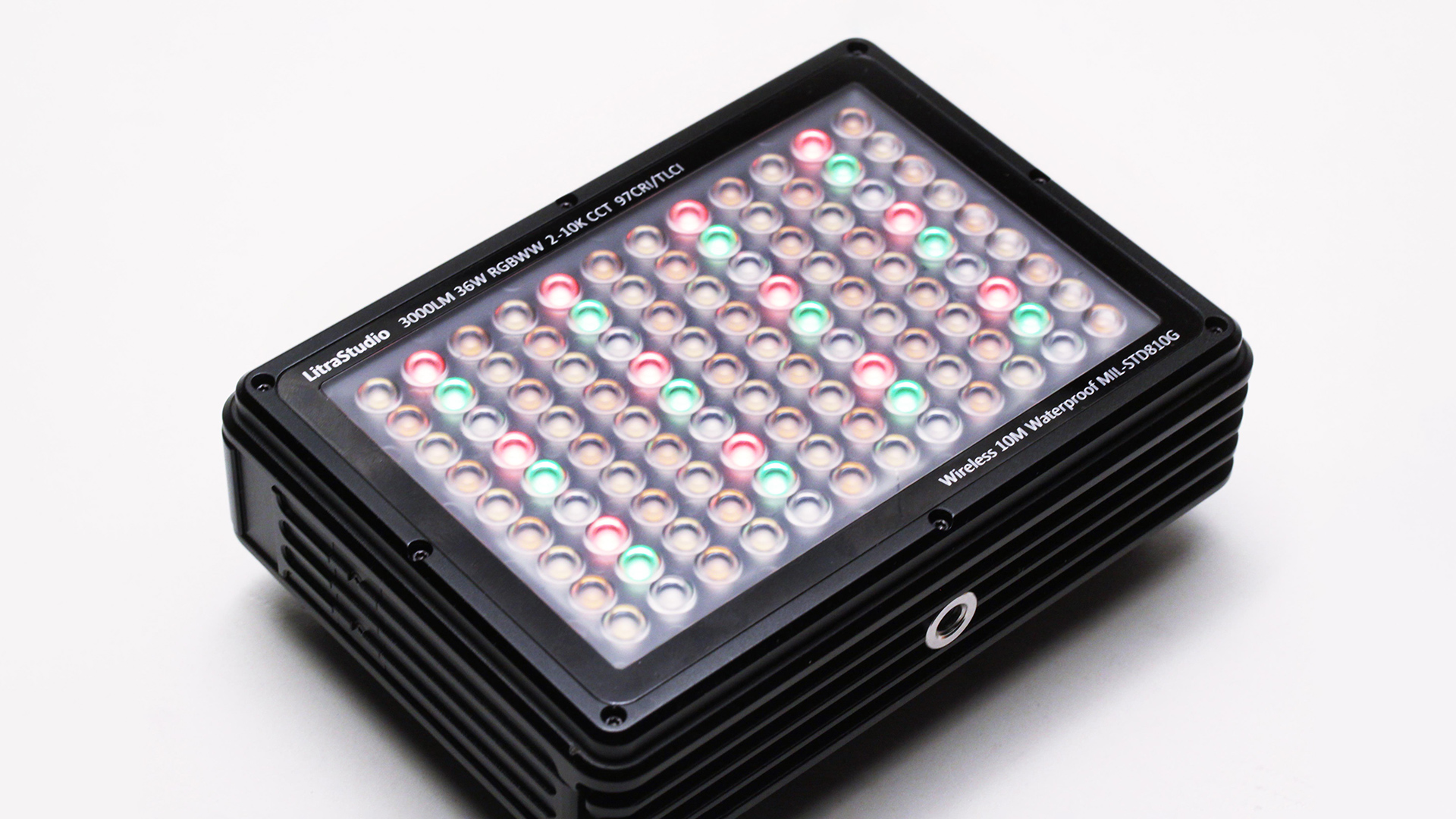 The mini LED light market is becoming pretty crowded, but we review a light from LitraStudio that is packed with features.

“Oh,” you’re thinking, “it’s another miniature LED light.” And you’d be forgiven for that, because the LitraStudio looks fairly conventional, and in many ways it is, but glance closer and it becomes clear that Litra’s biggest small light has been designed to address a market already saturated with feature-rich LEDs. It gives us about everything we’ve ever seen and more besides.

First impressions are that the layout is conventional but the thing is not lightly built. The LitraStudio is waterproof against immersion to thirty feet and as such it’s a block of finned aluminium, and “block” is the right word. As a result it feels like something that’d survive being dropped, but which you probably wouldn’t want to drop on your foot. To save a bit of mass, it’s quite possible to pull out the internal battery and run the light from USB-C power.

Removable batteries? Absolutely. The power pack is itself a Litra-branded USB power bank so it can be bought in multiples, replaced quickly and recharged separately; finally, a light that doesn’t turn into a battery charger after an hour. The light can be run without the battery using the supplied Dell-branded USB-C power supply, or any other sufficiently robust source of USB-C power. Dell? Why yes; they’re actual high quality power supplies. Other manufacturers take careful note. 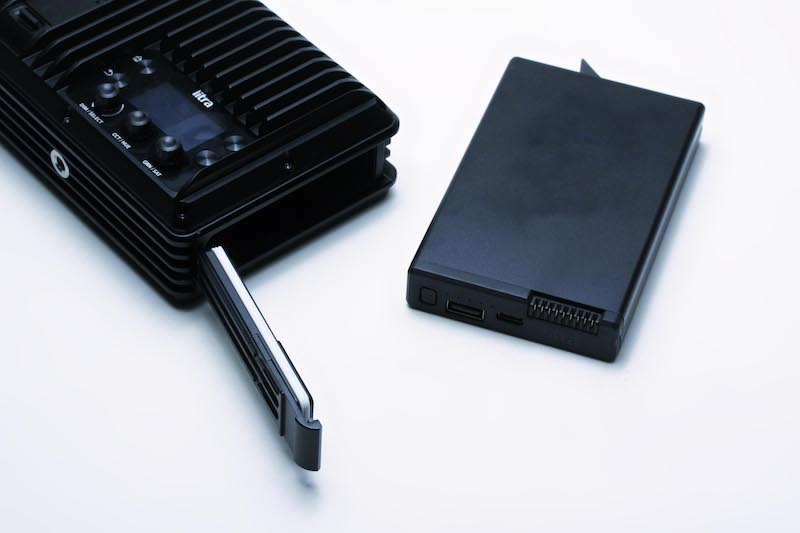 The removable battery is essentially a USB power bank (and can be used as such).

The battery and connector doors require a good solid push to compress the silicone seals, ensuring a waterproof closure. That’s good, though the control panel on the back might suffer a little from the requirements of waterproofing. The little OLED display is fine, although the rotary encoders feel a little spongy, presumably because they have to go through seals. There’s one 1/4” mounting point on the bottom. The light supports DMX control via an optional external module; otherwise, control is via the panel on the back or by bluetooth from a phone. 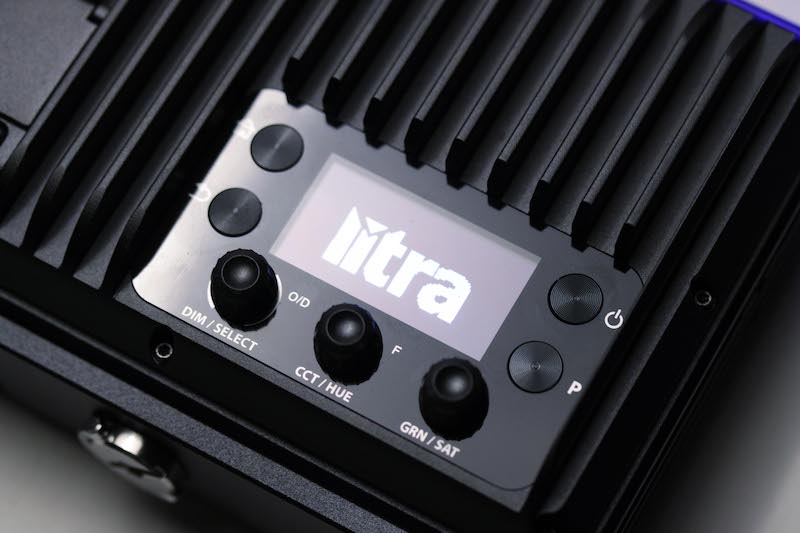 There are individual LED emitters for red, green, blue and two shades of white. The red and green emitters are not phosphor converted (blue would be a stretch), so their output is a little spiky but very capable of producing saturated colour effects; the upside of avoiding phosphor is power. Full primary colours include only twelve emitters but output is reasonable and fluorescence effects are possible with the blue channel. Due to the physically separate emitters, there is some chromatic shadow segmentation. Adding the supplied flexible silicone diffuser solves that, as does the much higher-gain frosted diffusion behind the honeycomb in the modifier kit, of which more later. Various flashing and flickering effects are available, and there are four operating modes: CCT (for white,) HSI (for manually setting colours,) gel (self-explanatory) and “RGBWW” which provides direct manual control over the five channels. The gel selection is currently limited but planned to increase.

In CCT mode, white light quality is excellent, with CCT coverage from 2000K to 10000K. Testing at 3200K, 4000K and 5600K at 5, 50 and 100% power reveals peak intensity at the cooler end of the range, as is common with LEDs. An indicated 5600K at full power meters at 2920lx at one metre. Detected CCT is 5903K, a tiny error of 9 mireds or less than half of a one-eighth CT straw filter. TLCI is a little over 92; all other test points are at least this good, ranging up to 96 at 3200K. With full power and 3200K selected, output is 2322lx. There is a very small tendency to drift plus-green at lower CCTs but well within the range of available adjustment, and possibly within experimental error. CCT error is largest at 5% power and 3200K, reading 3613K, though many lights drift somewhat at very low output. There is an overdrive mode with a 300-second timer.

Yes, you can put it in RGBWW mode and wind everything up to 100%. The result is a bright, pale lavender light. Running the light near its maximums tends to make it rather warm, even hot to the touch, and it’d be kinder to mount it on a large metal object to help with heatsinking, but it will protect itself in extreme situations.

At 36 watts, it’s naturally not a keylight. Litra have produced a simple cage to mount four of them side by side and create something that then, at 144 overall watts, competes with full size LED panels. The two handgrips make it look a bit like the sort of thing a diver might wield for underwater shooting, and we’re reminded of the waterproofing, but it’s also something we can mount on a stand and use as a conventional light. There’s also a selection of modifiers available separately, including a frosted diffuser, honeycomb and barn doors. As with any softlight, the barn doors are only gently effective; harder cuts need flagging, though the honeycomb helps by making it more directional.

At high CCTs, colour temperature reads a little high, but not so you'd notice.

Value-wise, Litra is clearly not intending to address the bottom end of the market. On the company site, the LitraStudio lists at $650; the modifier kit is $120, $50 for the softbox and the batteries are $100 a pop (one is included). As the LED market matures, cost per unit power is becoming an important number and the LitraStudio is around the same price per watt as a Creamsource Micro Colour, a high end option. It’s not a great comparison as the Creamsource is much larger, double the wattage, more directional, merely splashproof and not internally battery powered, but these numbers suggests the LitraStudio, while not cheap, is not outrageously expensive given its waterproof specialism and the good thinking with the battery pack.

If you don’t need the special features, you could pay less, but if you’re after a small, full colour mixing LED light that has very few compromises and will survive World War 3… well. Not every small LED that’s proposed for review actually gets reviewed because there are now so many of them, but the LitraStudio earns its exposure.