4K in a fixed-lens camcorder? No problem, says JVC 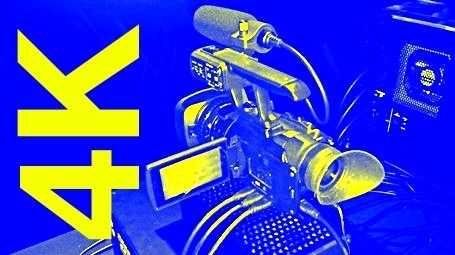 We’ll be one of the first to get our hands on a production version of this amazing device so keep watching for our hands-on review!

Sometimes you see something that just stops you in your tracks. Maybe it’s much better than you expected it to be, or it’s such an unexpected form factor that you’re left wondering how on earth it ever got made. The new JVC 4K camcorder prototype is both of these.

I first saw this device at a Technology Showcase organised by JVC UK in December, in London’t Soho Theatre, chosen because it offered the complete darkness needed to see the dynamic range of JVC’s 2k/4k projectors. These highly-evolved beasts can upscale 1920 x 1080 HD to a genuine 4K pixel resolution, and are, according to JVC, ideal for grading theatres.

Like all the best prototypes, the 4K camcorder was connected to a wardrobe-full of external boxes, and was all the more impressive for it, because you could see exactly how much science and electronics JVC are going to have to squeeze into the minuscule camcorder before they release it in the Spring.

This camera has no less than four HDMI outputs, each carrying a quarter of the image (4K is 4 times the resolution of a “standard” HD image). The recording medium is 4 SDXC cards and the camera houses four HD H.264 encoders. (Have you spotted a trend here?)

The production version will come with software that re-assembles the four HD “tiles” into a single, seamless image. Which means that you can’t show the camera’s output on a live display.

Except that JVC had figured out a way to do this.

All four HDMI leads went into a very big box of electronic stuff that stitched the image back into a single 4K image in real time for projection on the wall. The projector itself was the size of a coffee table.

What did it look like? Very good. Unmistakably superior to HD. Much better than you would expect from a camcorder in this form factor. Sharp, colourful images on a screen about 72” across. Still images that size can have problems, and yet this was video: 8 megapixel video, to be precise. Of course if you looked hard enough you could see the limits of the lens: colour fringing and a distinct lack of crispness at the edges, but, overall, this was not the sort of image quality you would expect from a small handheld camcorder with a fixed lens.

So, with every other manufacturer rushing to bring out digital cinematography-style camcorders, what’s JVC’s reasoning behind this little gem?

Simply that, at around £4,000/$6000, this is an easy choice for a backup or secondary camera for 4K shoots. Cut to this camcorder and you’re not going to loose the 4K look or feel.

I can’t wait to see who buys this.