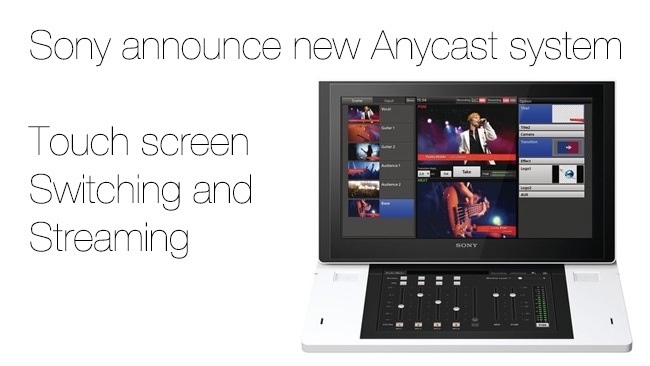 Sony are launching a new version of their "Anycast" production switcher, the AWS-750. It is smaller and lighter than its predecessor and features an innovative dual touch screen control surface

The AWS-750 is a portable production switcher which is HD and SD capable. On the Video side it has 4 HD-SDI inputs, 2 HDMI inputs, 2 VGA inputs and even 2 composite video inputs. For audio there are 4  balanced and 2 unbalanced audio inputs. It can output to HD-SDI, HDMI, or RGB.

It can be used to switch live sources, play back pre-recorded material, add transitions, logos and text to the video outputs and can mix audio from mono and stereo sources.

It can record the result to an internal 192GB SSD (up to 10 hours of HD) and can also stream live to the web as H264. It can even control some models of remote camera heads so in theory one person could produce an entire Live show.

The most interesting thing about the new Anycast compared to the previous models is the move to touch screen control. With so many capabilities the older models were festooned with buttons and switches, which made learning and operating them quite complex.

The new AWS-750 has two touch screens, one 1920x1080 screen for the main display, which can be operated in the open or closed positions. The other screen is a 1280x768 screen which is under the main screen when the unit is closed but is revealed by tilting the main screen up. This screen acts as the interface to the audio mixer, titling system, system configuration and other functions.

By designing the system to operate in this way Sony have created an intuitive and easy to learn system which can be operated by users with minimal training.

The system is compact and lightweight and can easily be transported from one location to another, making it ideal for educational use and many smaller live events.

More information is available on the Sony website here