The filmmaker's guide to surviving self isolation

You are doing the right thing and staying at home. But if you are a filmmaker, once you have exhausted the star potential of your family and pets, you may be at loss for what to do next. Here are some suggestions.

Once we had shelves full of archive tape. Maybe you still have – in which case, it is time to sort them and put them into boxes. Then put those boxes into the attic, because however much you might want to look at what’s on the tapes, you no longer have a machine to play them on.

But you do need those hard drives. If you are anything like me, you have a number of drives labelled ‘back-ups’ and have long forgotten what’s on them. Many have ceased to function. So check out every one, work out what you need and, if you really need it, back it up again. You can never have too many back-ups.

This strange looking box is for backing up your projects and footage. Or at least it was. Does it still work?

Throw away some cables

Hard drives come with cables, but cables last longer than hard drives, so a surplus builds up. How many USB cables and kettle leads do you actually need? Throw them in a box together and they will breed – it’s an ugly sight. Then at the back of the cupboard there is that box of obsolete cables. OK, it’s useful, maybe, to have the odd Firewire or eSATA or SCSI cable just in case... But do you really need 10? And while you’re at it, throw away that mysterious box that could well be something like a JAZ drive – no one knows what it is any more and it ceased to function decades ago. 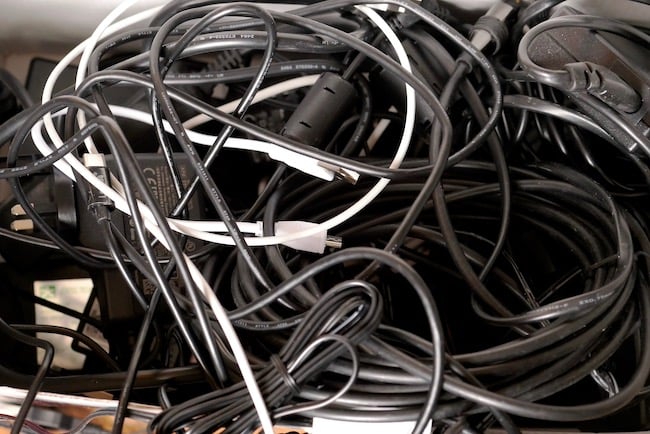 I'm sure that cables breed... Maybe it's time for a clearout.

Buy yourself a labeller

And if you have one already, buy a new one – they never seem to last very long. You know the sort I mean – those machine that spit out self-adhesive coloured plastic strips. You can now get those all those back-up drives and tapes and label them. Then put them back again. Label up the hooks where your cables are hanging. Label everything. Label the labelling machine. It makes you feel organised, even if you aren’t. 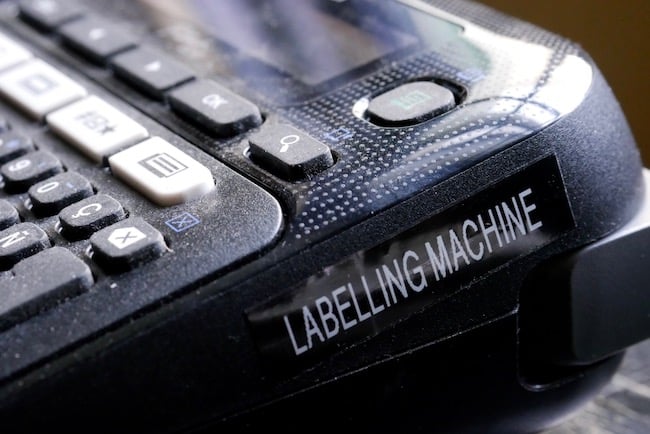 It takes time to make a good showreel, but time is what you have now. In fact, make several showreels. Make a showreel tailored to every possible requirement rather than demonstrating the range of work you are capable of. Because clients, as we know, have no imagination and they are suspicious of multi-taskers. Show them a doc you’ve done about ducks and they’ll say ‘Great ducks. But can you film swans?’

Organise your own online movie festival

OK, you’ve spent (no, wasted) a lot of money submitting your film to festivals that aren’t going to happen. Never mind, your film wasn’t going to be selected anyway, apart from that one in Outer Mongolia which charged 100 bucks to enter and which no one was ever going to get to. So start your own festival, featuring your own films. Send everyone you know the Vimeo links. Invite your colleagues to submit their work for a modest fee. Print some flyers. Open a bottle of cheap fizzy wine. You can all enjoy the films you’ve seen already, congratulate each other and have a good time even though you fail to make any sales. Just like a real film festival but without the hotel bills.

You’ve been wanting to write one for years and you have that germ of an idea. There’s no excuse now – you’ve got nothing else to do. There are some books out there that will help you to write a screenplay in 90 days. Or 10 weeks. Or 21 days. Why not try them all. They might be better than you expect : follow the guidelines and you will end up with a movie script. Sadly, it won’t be a very good script, and most likely it will be terrible, but at least you can print it out an leave it on your desk, with the author’s name well visible on the cover, and, if anyone asks what it is, shrug your shoulders, sigh and mutter, ‘Yeah, it was all going so well until the virus hit us’.

They need stuff. Someone’s got to do it. Now it’s your turn.