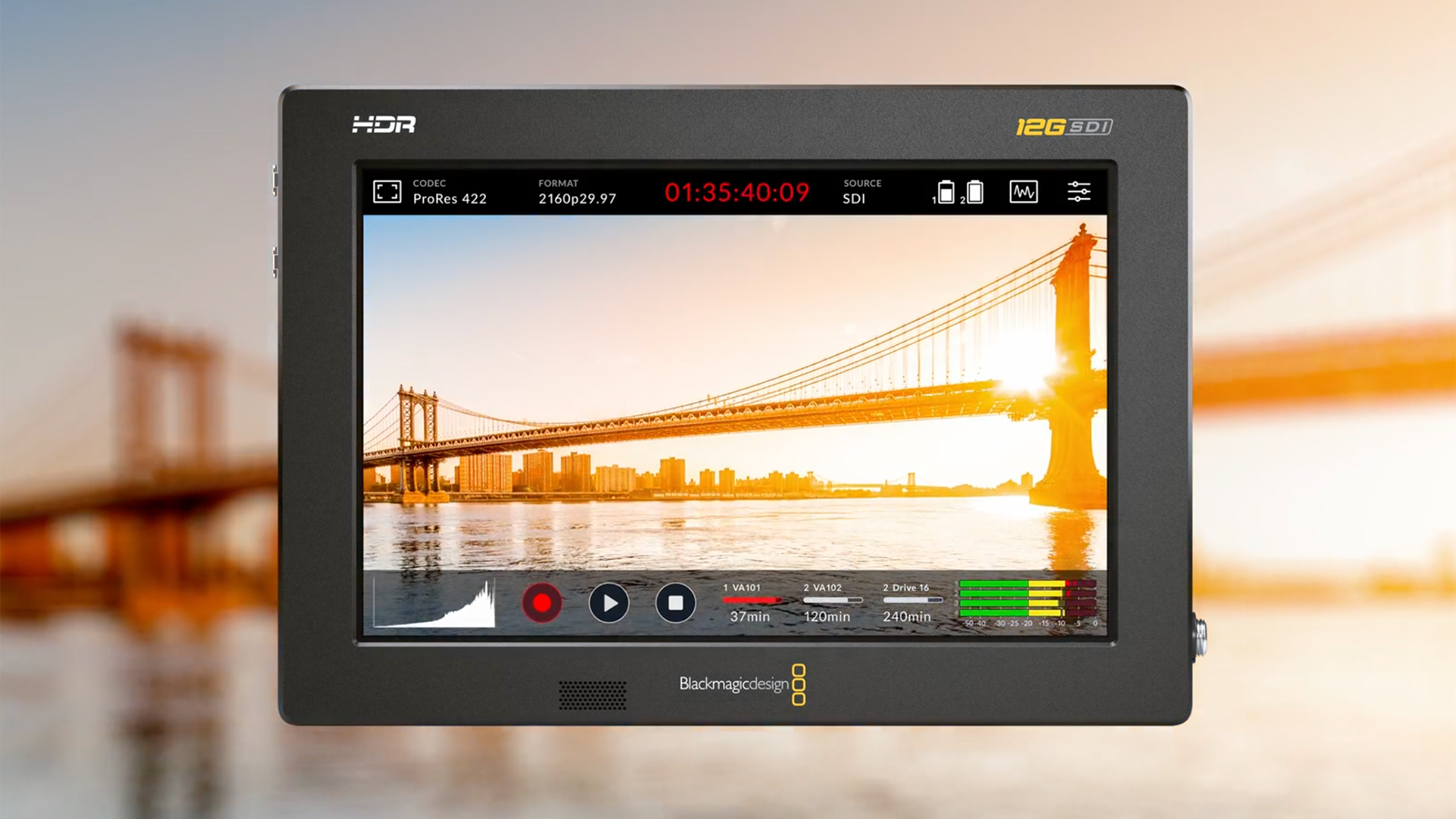 Review: Blackmagic Design has a well deserved reputation for building gear that performs well in excess of its price tag. Phil Rhodes takes a look at the Video Assist 7" 12G HDR, a monitor/recorder that would appear to provide more brightness than you'll ever need. Let's take a closer look.

It’s easy to recommend some pieces of equipment as being evergreen. Tripods are likely to remain useful until they physically fall apart, to the chagrin of tripod manufacturers. A decent battery system has many of the same characteristics, especially if it can be recelled. With Blackmagic’s latest monitor-recorder, we might have reached much the same point, because it’s not really clear where things go from here.

The device I'm looking at today is the Video Assist 7” 12G HDR. On the face of it, it’s a 7” monitor-recorder, or, with our cynical hat on, another 7” monitor-recorder. Any device in this area enters the market against a lot of competitors, and it’s not even the only option out there which supports 12G SDI. Twelve gigabit SDI essentially means resolutions around 4K with frame rates above 30fps, although at around £750 ($995 in the USA) Blackmagic’s effort is noticeably less expensive than some of the alternatives. 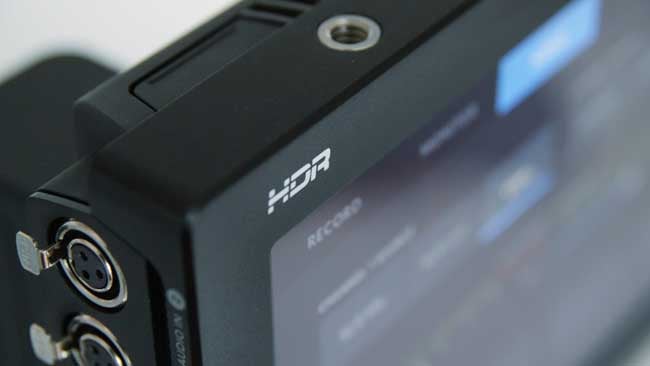 The 12G HDR version is clearly a design descendant of the Video Assist 4K, and from the front it looks very similar. It’s barely thicker, presumably to accommodate the higher-power backlight, and barely heavier. This model has a 1200-pixel-high, 16:10 display, so the HUD can remain outside the picture area. The cross-conversion is retained, so we can go in as SDI and come out as HDMI, or vice versa. There’s still no downstream LUT support; the selected LUT appears only on the display. There are two miniature XLRs for audio at line or mic level, with or without phantom power, and onscreen level control. No adaptor cables are supplied, but the company offers them. Power input connector is still a coaxial DC jack, but adds a threaded locking nut (Freude! Schoner, gotterfunken!). The recorder retains the two Sony battery plates which support hot-swapping, although it doesn’t charge attached batteries.

The headline features are the 2500 nit display and the USB-C recording. One of the attractions of Blackmagic’s recorders (and the cameras, too) is that they’ll record some quite high performance files to really inexpensive media. SD cards are a good way to control costs, but fast USB-attached SSDs makes it possible to handle higher bandwidth. Since high bandwidth is exactly what we’ll get with high frame rate 4K, this seems like a good compromise. 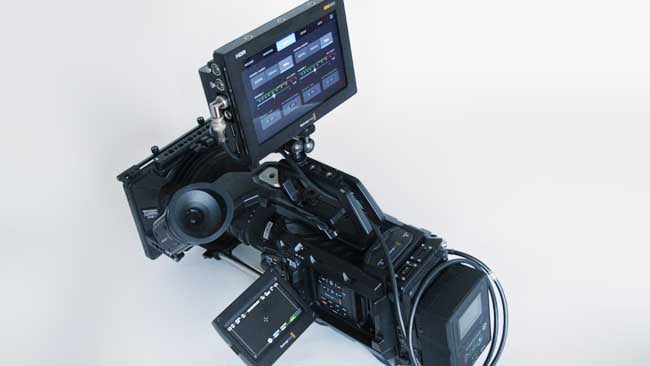 The Video Assist is equally at home on a DSLR or, as here, Ursa Mini. Accessories courtesy Wooden Camera and Core SWX

2500 nits is bright, up there with some of the most powerful displays around. The company warns that in a warm environment thermal limits might come into play and limit the achievable output. Desktop HDR displays for post-production facilities tend to include roaring fans that an on-set device like this really can’t (a fan is audible at power-on, but quickly calms down under automatic control). It usually seems quite quiet, indoors, in a UK February.

Many on-camera monitors sold with HDR support are used essentially for visibility in bright conditions, and it will certainly do that. If we’re interested in critical exposure assessment, there’s a question mark over the ability of any display, however ideal, to create a precision monitoring experience in the variable lighting conditions of a practical shooting day. Actually getting it to display HDR material correctly also requires embedded metadata, which, across the industry, is probably better supported in HDMI than SDI at the moment. It’s as well to test any specific setup, although we might hope that this situation will settle down as the market converges on, hopefully, exactly one standard. 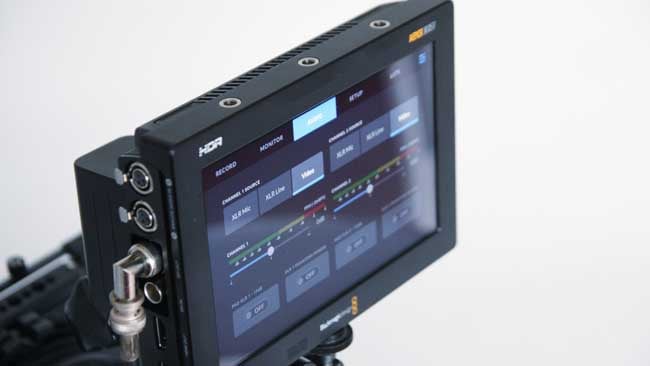 The UI is really well done

There is no way to manually set the the new Video Assist HDR to assume HDR material, which limits things a little. It’s not very easy, for instance, to use it as an HDR monitor on an Ursa Mini; perhaps it’s more intended to be a recorder for DSLRs but the same problem may emerge unless the DSLR supports some up-to-the-second HDMI modes. At the moment all of the LUTs that come with an many cameras target a 709 display, and while it would be quite possible to create one that targeted (say) a 1000-nit PQ display, there’s no way to get the Video Assist HDR to be that 1000-nit PQ display unless the camera asks it to, which it won’t. This is something that’s likely quite easily fixable in firmware; the device has the feature, it’s just a case of activating it in response to a menu setting.

Speaking of firmware, we should recognise the nice interface style that’s now consistent across a lot of Blackmagic products. The new Video Assist HDR is visibly a big improvement on the old. Lots of organisations have tried to give us big, easy-to-hit tiled buttons in UIs, but few have worked this nicely. It starts to demand perhaps more keystrokes than it should when asked to show us a big list of options, such as LUTs, but otherwise it’s fast and easy. 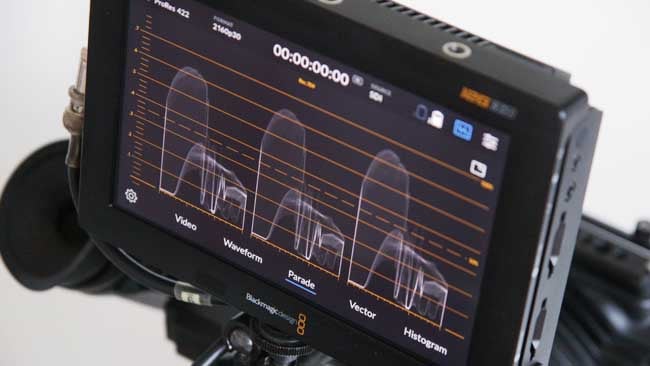 Some of the slickest scopes in the business

The high point, software-wise, is the quality and performance of the scopes. Some test and measurement displays are hard work to render, but there’s clearly the horsepower available to ensure everything updates at full frame rate and at full resolution. The waveform, vector and parade, in particular, are sharp and fluid, some of the best around. It looks like there’s a couple of frames of lag, but it’s not a dealbreaker. About the only additional scope options we could ask for would be to have the waveform as a small overlay on the picture; at the moment, only the reverse is possible, with a small picture in the corner of the scope. An RGB overlaid waveform would be nice, too. We could speculate about a steerable waveform target box for checking things like faces but that’s a rare feature.

There’s resistance to the universal adoption of 8K, and 4K workflows are still rather hard work so it may well be that a 4K, 60p-capable monitor-recorder will be good for a fairly long time. The Blackmagic Video Assist 7” 12G HDR would benefit from a firmware update to provide manual HDR standard selection; that shouldn’t be impossible. There may be hardware limitations that would prevent downstream LUTs and output scaling, but if it could be done, it’d be a huge sweetener. As it is now, the scopes are really good to look at and the display is brighter than the competition. If you spend a lot of time working in the burning desert, that might well be enough to close the deal.