It wasn't just camera design that changed in the last decade

In the last part of this review Roland Denning looked at the massive changes in camera technology in the second decade of the 21st century. But beyond cameras, what was happening?

Sophisticated, mass produced, computer-controlled technology was everywhere, and nowhere more apparent than in the dramatic rise of the drone.  We were amazed by those swooping and soaring cameras, but was even more amazing was how what was once mind-blowing became commonplace. You can hear the audience muttering, yeah, great, your camera can fly…  now what can you show me? (As an aside, my personal favourite camera support innovation in this period involved no electronics at all – the Satchler/Vinten Flowtech tripod, a brilliant re-design of something we had all taken for granted).

Sensor technology got refined to the point where we could actually film in the dark, but what we then discovered was that the dark didn’t look dark any more, and actually didn’t look very interesting at all. Camera technology got so good we had to degrade it – or rather, find a way to give images character or emotion or a more organic look.  ‘Character’ in both audio and video basically means ‘distortion’. We loved a bit of grain and lenses that exhibited flares or diffusion or an element of geometric eccentricity, just as we loved the ‘warmth’ an analogue stage added to a pristine digital audio chain.

But there is nothing really new in this, throughout history photographers and cinematographers have sought to replace the accurate with the mysterious; what has changed is that manufacturers have incorporated it into their marketing.

At the start of the decade Apple users were still very happy using Final Cut Pro 7 – a programme that, uniquely, was affordable enough to be used by students yet could function at the high end and even threaten Avid. Everything changed when Apple introduced Final Cut Pro X in 2011 – a radical re-design and a price cut from $999 to $299.  But it was not backwards compatible with FCP7, it introduced a number of unsettling new paradigms (like foregoing audio tracks) and lacked many features that the pro market saw as essential. This woefully misjudged launch alienated a whole section of the industry from Apple, but FCPX soon developed into a comprehensive programme which became the fastest (and, some would argue, most advanced) NLE available to Apple users. 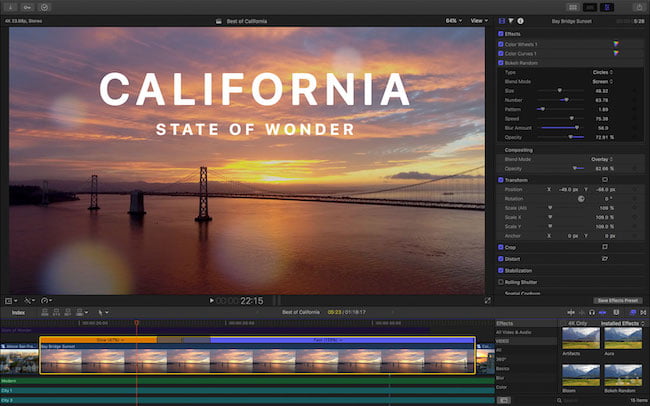 FCP X is now a fully mature NLE, but it didn't start out that way. Image: Apple

But the industry is by nature conservative, and many jumped ship to Adobe Premiere, a more familiar, cross-platform but, arguably, clunkier programme with the advantage of easy integration into Adobe’s suite of graphics software.  Apple lost the broadcast market but found fans in the much larger world of independents and prosumers. Premiere rose to become the most widely used editing programme, except at the high end where those reared on Avid stuck with what they knew. However, not everyone was happy to fork out the monthly subscription that Adobe now demanded.

Then from Australia comes along BlackMagic Design, the most disruptive innovator in the business.  They took over a well established grading programme from da Vinci Systems, who at the start of the decade were supplying systems costing between $200k and $800k, and developed it into Resolve - a comprehensive, cross-platform editing package which by the middle of the decade would be available free. Not only that, BlackMagic continued to expand the programme incorporating audio from Fairlight and effects from Fusion. The free edition became a fully functional suite of programmes – you only need the upgrade to the paid ‘Studio’ version if you want to work with resolutions above UHD or take a advantage of a few fairly specialist features. Even more extraordinary, the paid version will still only cost you £250/$300. And it comes free with any BlackMagic camera.This raises several questions: how can BlackMagic make it free? How can any other edit system survive? And what’s the catch? Well, I don’t think there is a catch, and it seems BlackMagic’s radical economic model is one of vertical integration and profit from (optional) hardware peripherals. It’s not so much BlackMagic want to takeover the world, they want to build a parallel universe where the established manufacturers are irrelevant. 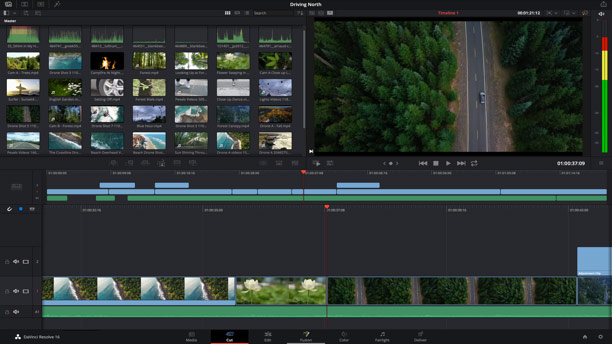 Despite sophisticated software like Resolve being available free, there remains room for high-end grading programmes like Baselight and NuCoda.  But this decade did see the final death of Quantel, whose fine but costly hardware-based editing and effects systems, while trailblazing in the previous three decades, could not survive in the era of low-cost software products.  Other familiar names, like Media 100, one of the very first non-linear online systems and the pioneering Lightworks, whose onscreen fish this site was named after, became software-only and free.

Of course, as they say, there is no such thing as a free lunch. Setting up a professional grading suite with fully broadcast standard calibrated monitors, dedicated controls and, most importantly, trained and experienced operators is never going to be cheap. Even if it is to be based around Resolve, you are still likely to want BlackMagic’s control panels that can cost you up to 30 grand.  What BlackMagic is doing, therefore, is giving software away to those who were never going to buy it in the first place, thus spreading global brand awareness, while those high-end facilities will end up spending the sort of money that high-end facilities spend.

The decline of cinema , the end of physical distribution, and the rise of streaming

This was the decade when almost every cinema in the land turned digital, even if most were 2K when 4K was about to become the standard for home TV. While some maintain there is nothing better than a watching a pristine 70mm print or even 35mm print, preferably via a carbon arc projector, that experience rarely occurred outside a studio screening room. In the real world, where prints were of variable quality and inevitably scratched, the switch to digital was mostly an improvement. Moreover, while traditional cinema entered terminal decline, event or ‘live cinema’, making use of very affordable and transportable video projectors, boomed. So cinema can now take place anywhere – in broken down warehouses, in museums, in forests and gardens – and can be the climax of a performance based around the themes of the movie.

If you were a cinema distributor, there was a lot to be said for DVDs, finding a market for those films that never made it to the big screen. If you were an independent producer in the corporate or specialist market, DVDs could be your life blood. They were cheap (if rather tedious) to produce and customers would happily pay a few quid for them. Blu-rays had the picture quality HD TVs should have had but they never became as popular as DVDs, and UHD Blu-rays seemed to be destined for an even smaller market share. By the end of the decade, discs were part of a bygone era. And we all know why.In the middle of this decade there was a moment when independents saw their salvation in Transactional Video On Demand. Here, without having to manufacture or ship anything or negotiate through the power structures of TV, your work could be watched on the internet for a small fee. This failed for a couple of reasons: firstly, at this point in history, televisions were rather different from computers and people wanted to watch programmes on a big TV rather than a computer screen. Secondly, people came to expect that whatever came on to their computer screen, it should be free. Or at least, as it turned out, already paid for by subscription.

Streaming became a viable way to watch television in the 2010's.

Netflix streaming arrived in the UK in 2012. It was how the UK got hooked on Breaking Bad (a series that didn’t actually originate on Netflix), and we never looked back.  Netflix, Amazon Prime and Sky’s NOW, not forgetting BBC’s iPlayer and the streaming output of the other broadcast channels, not only changed the way we watched programmes, it changed the way programmes were made.  Netflix had the advantage of a slick interface and efficient performance that made it even easier than a torrent search.

Here in Britain, there had been as assumption that ‘popular’ programmes would subsidise the more serious ‘quality’ programmes which naturally attracted small audiences. What the cable channel HBO proved in the States, and what the streaming services would prove worldwide is that audiences will gladly pay for programmes of the highest quality. HBO and Netflix learned that it pays to let the creatives make the creative decisions. In terms of script, cinematography, direction, acting, design, imagination and even technical standards, TV now surpasses cinema. The long-form box-set drama gives writers and directors the opportunity to develop characters and stories over 12 hours or more rather than two. And we lap them up.

So broadcast TV became the place for real-time events: the news, sports, competitive baking programmes and talent contests. The cinema is now the home of comic-book based action movies aimed at 16 to 25 year olds. The streaming services is where we find high-end drama series, documentaries and art movies. Everything else is on YouTube.

Perhaps we will look back on this decade as the Golden Age of TV. With many other streaming services coming online – Apple and Disney to name just two – the content is going to be spread thinner and there is a limit to how many subscriptions viewers are willing to pay for. Or perhaps the paradigms will shift completely, VR will finally live up to the hype, merge with games and we will rediscover The Matrix as a quaint documentary way ahead of its time.

What we have seen during this decade is that while camera and editing technology has become exponentially cheaper and easier, the high end remains as sophisticated and costly as ever.  Despite the fact it has have never been so cheap to make and distribute a film – or make a music recording or a book for that matter – it hasn’t really democratised the media. There is a huge mass of people working for free, perhaps for the love of it, and a small elite working on prestige projects and getting very well rewarded for it.  We still have our stars, we still have big movies, even if they now come delivered in 12 one hour portions. That seems to be the way we like it.