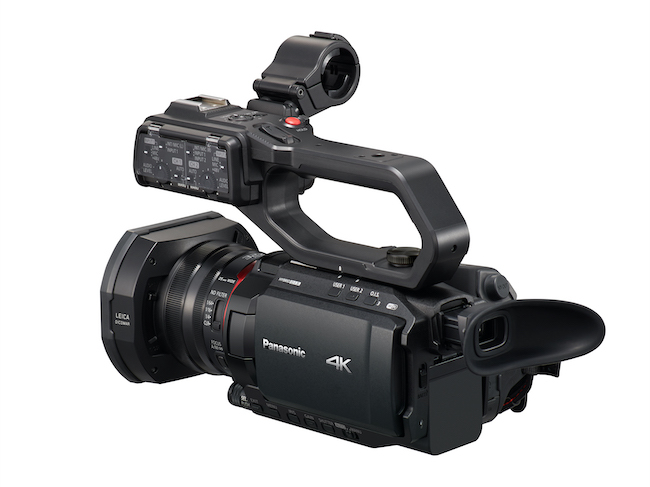 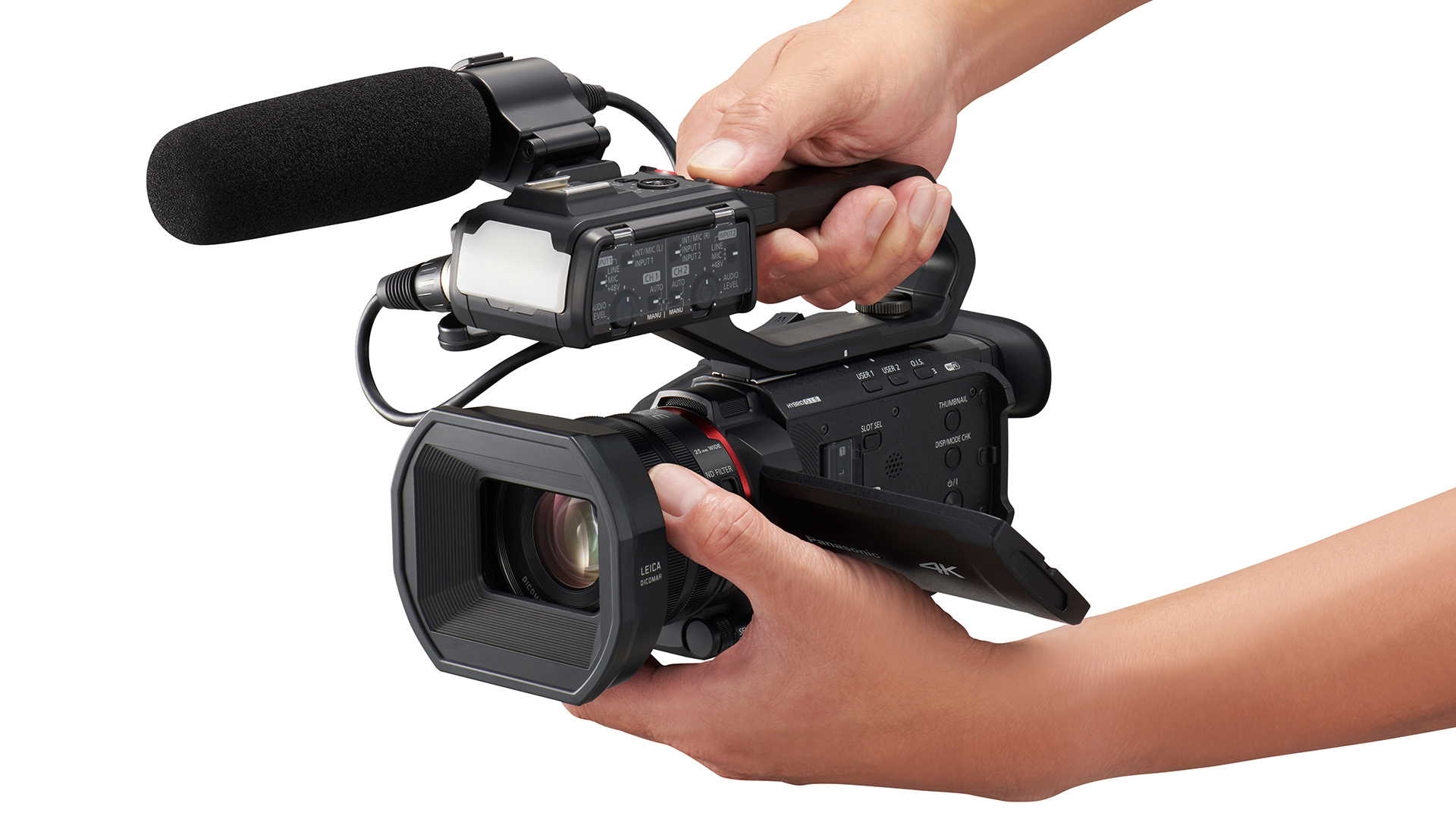 Panasonic announces some of the smallest professional camcorders on the market.

Comparing stills cameras that can shoot video to dedicated video cameras reveals some interesting differences. A Panasonic S1H camera, for instance, records 6K video from a full-frame sensor, and even in concert with an external raw recorder it’s vastly smaller, lighter, and less power hungry than any of the full-frame cinema cameras that exist. It’s natural enough to frown at this sort of comparison – stills and video cameras are built for very different markets – but at some point, the mathematics doesn’t care what market it was made for. There should be some way we can have super-lightweight cameras based on at least some elements of stills camera technology, which would fit in a pocket and shoot for hours on a charge. 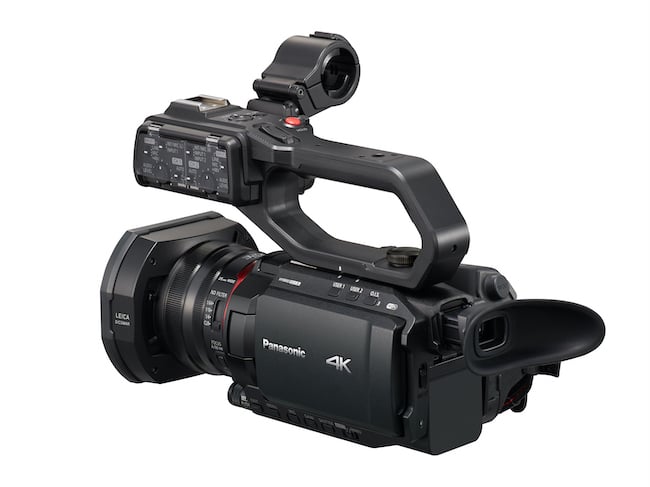 Panasonic’s upcoming range of very compact 4K camcorders seems to have been born of exactly that sort of thinking. They have very different model numbers, but they’re all based on the same chassis with the same sensor and lens. The pro-oriented AG-CX10 is identifiable as part of Panasonic’s professional lineup by that AG prefix and support for recording MXF to (micro) P2 cards; this will be the choice of broadcast news outfits keen to pack something very lightweight for those peak-of-Everest moments. The HC-X2000 and HC-X1500 lack hardwired network capability and thus NDI compatibility, which is featured on the CX10. The X1500 also loses the 3G-SDI connectivity and on this camera, the removable top handle, which includes the inbuilt LED light and XLR audio I/O, is an optional accessory to keep the cost down. It’s a nicely put together range, even if the model numbers don’t make it sound like a range. 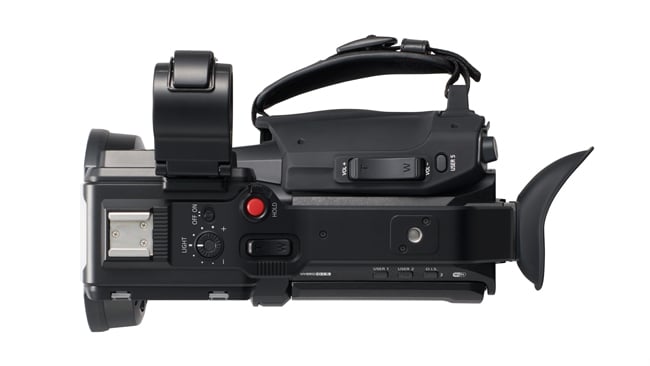 What’s common to all three is perhaps a set of the smallest dimensions ever to fall under the title of “camcorder.” OK, perhaps that’s a little hyperbolic, but they’re certainly tiny, and that’s even more impressive when we consider that a large proportion of what appears to be the camera’s volume is actually occupied by the internal battery bay. The thing does not double in size when we add a battery. The handle, conversely, is nearly as big as the rest of it.

Miniaturisation always has the downside of slightly compromised ergonomics, and there is naturally no intent that these camcorders handle like a full-size broadcast camera. The layout is generally conventional, if very compact. There’s a pop-out viewfinder at the back, which will probably be overlooked by most people in any circumstance where the LCD screen is viewable. Basic photographic controls (gain, shutter speed, and so on) are accessible via selection keys and a rolling wheel, and there are two freely-rotating magnetic encoder rings, one of which is assignable between zoom or iris control.

The camera and lens assembly itself – the front end, if you like – is well-specified given the size and price of the camera, with a 1/2.5” sensor. Sensor size specifications are often tricky to interpret given the historical reliance on the size of camera tube required to achieve a given active area, so the active area may not actually be 1/2.5 inches, or about 10mm, diagonally. Sensor sizing is always a compromise between size, cost, lens demands and image quality, and this seems a reasonable showing for a camera of this size and pricepoint. Perhaps as a consequence of the compact sensor, the lens is very capable, specified around 4 to 99mm and ramping from 1.8 to 4 as it goes (for some reason camera companies persist in quoting 35mm-equivalent focal lengths, so many documents will call it 25-600mm). That’s a 24:1 zoom range, which is not spectacular for small camcorders in general, but it’s pretty special given how small everything is. There’s five-axis optical stabilisation, switchable NDs and a removable IR filter, which means there’s a lot packed behind that lens hood. 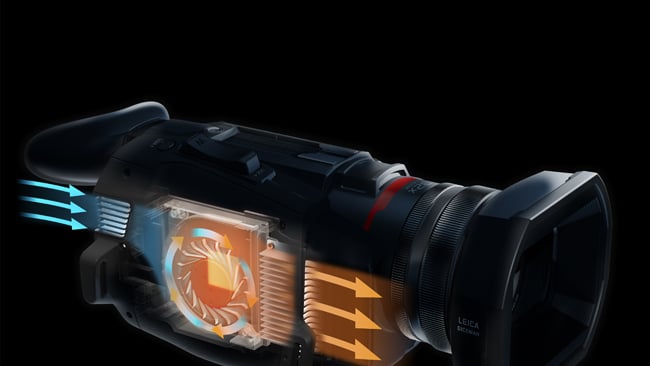 Recordings are made to SDHC or SDXC card, or on the CX10 to a (largely equivalent) microP2 card. The camera will shoot UHD up to 60fps and 120fps in HD, which is a fairly normal specification for UHD cameras at the moment. About the only limitation is that 3G-SDI connector, which is not capable of carrying UHD pictures; the only UHD line output is via HDMI on all cameras. The NDI provides another output option on the CX10 and all cameras are capable of streaming in the usual formats over wi-fi, which makes for a staggeringly quick and easy way to wander around any location that’s covered by decent-quality WiFi and stream direct to one’s adoring YouTube followers.

None of these things is individually earth-shattering, of course; it’s the diminutive dimensions and long legs that make Panasonic’s new fleet interesting. They’ll work for news and ultra-lightweight documentary, but the company is presumably seeing the market in online video, which has long demanded more sheer image quality than broadcast TV. RRPs put the CX10 at £2,299, the X2000 at £1849 and the budget X1500 at £1,449, which puts them right in the sights of an ambitious YouTube channel that wants to travel very (very) light. The examples we’ve seen were very early, pre-production demonstration models with a couple of rough edges, but appeared near-final. The cameras should be available from April (for the CX10) or March next year, and we’ll have a closer look as soon as there’s one available to look at.