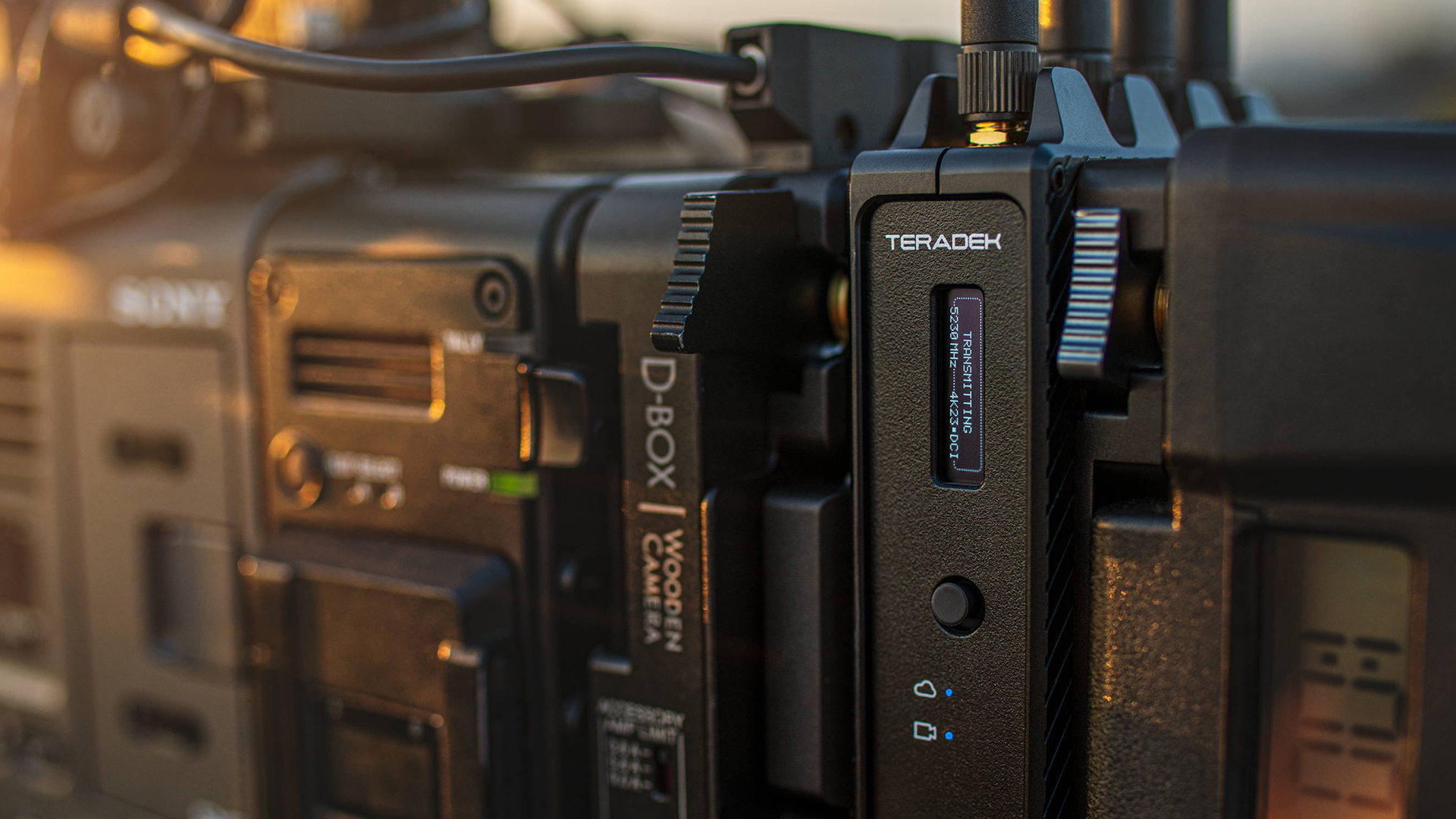 Review: Faultless wireless 4K video at up to 60p sound good to be true? We put the Teradek Bolt 4K 750 through its paces to find out if the hype measures up to the reality.

Most of the monitoring that happens on film sets, even quite high-end film sets shooting high-end cameras, is done in HD. There’s always the argument about how visible 4K really is, at least in anything less than ideal viewing conditions on big displays, but it’s hard to argue that the makeup and art departments shouldn’t be able to look at a full-res picture if they want to. There are various reasons it doesn’t often happen, but it’s at least partly because the ecosystem of gear is only just building up. There are 4K monitors, there are 4K LUT boxes, there are solutions to many of the problems, but the Teradek Bolt 4K steps into what’s still a surprisingly rarefied arena. 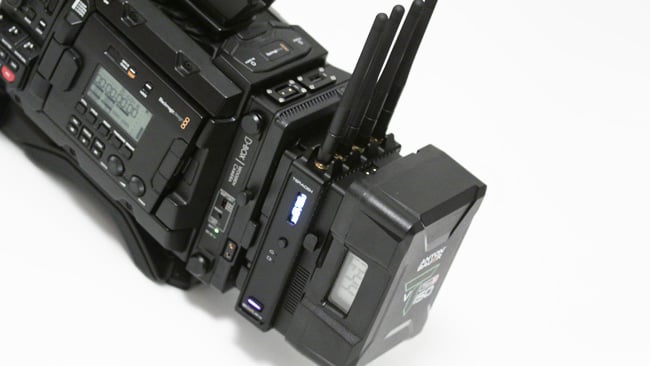 There are three versions: the 750, the 1500 and the Bolt 4K MAX with a larger antenna array for up to 5000ft (1500m) range. The device considered here is a model 750. It is, in every practical sense, a Teradek Bolt wireless video link, writ larger (though not physically larger – just with more pixels.) Both units are built in the usual format, to latch in place between battery and camera. The receiver has the antennae on what might seem to be the side; this seems intended to match the design of things like the SmallHD monitors, which put the battery plate on horizontally rather than vertically. 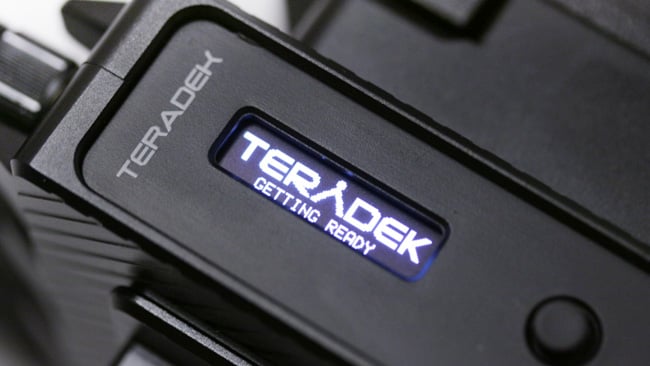 Onboard controls are straightforward

The new version has been updated with 12Gb SDI and HDM1 2.0 input and output options, allowing it to handle 60-frame 4K, and that does mean full 10-bit, DCI-resolution 4K with HDR support on the HDMI. This review is based on combining the Bolt 4K with a Blackmagic Ursa Mini Pro, which lets us look at a wide variety of signal formats and has high speed SDI output (though no HDMI.) A Panasonic GZ1000 OLED TV was used for full-resolution viewing (except for full DCI 4K) on a suitably large display, connected via HDMI. The system will also downscale, so it’s possible to put 4K into a transmitter and then display either HD or 4K on up to six receivers.

It’s as well to be clear at this point that really evaluating the range and reliability of a piece of radio equipment is very difficult. It’s possible to walk the transmitter away from the receiver until the picture breaks up, of course, which it inevitably will at some point, but it’s very difficult to generalise any one set of results to everyone else’s experience. The performance of radio devices is dependent on interference with devices operating in the same range of frequencies, signal reflections from pieces of architecture, sunspots and more. So, let’s go into this knowing that it’s very difficult to give a specific and objective view of things like range and reliability; your mileage, as ever, may vary. 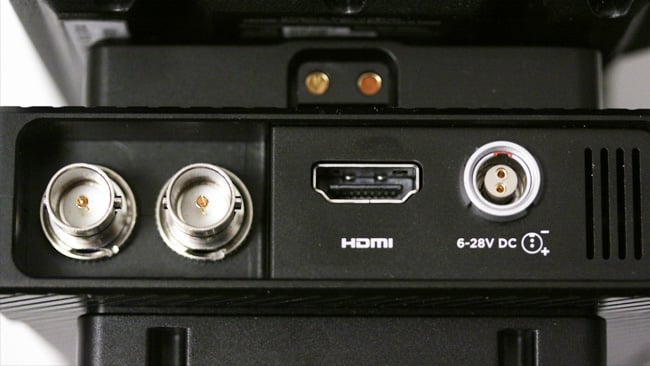 The HDMI inputs support HDR signalling, assuming it's being output by the camera

The Bolt 4K operates in one of fourteen channels in the 5GHz range and therefore will be license-free in most jurisdictions. That does put it in the way of everything else that wants to operate wirelessly in most jurisdictions, but within that limitation everything that can be done to make the link more reliable has been done. The transmitter has four antennae and the receiver five, the better to avoid multipath losses, where the signal is smeared by reflections which may take different paths and therefore take different amounts of time to arrive. The Bolt series has long used an interesting approach to sending video images wirelessly. The technical description for what they’re actually doing involves terms like “orthogonal frequency-division multiplexing” and “joint source channel coding” and derives from the work of Israeli company Amimon, with which Teradek was so impressed that it bought Amimon at the end of 2018.

To put it very, very briefly, the approach used is to describe a series of digital bits in the relationships between radio signals at closely-spaced frequencies ; as such there is little or no preprocessing required. The more obvious solution in the technology of today is to take the video, compress it using a codec such as H.264, and send the H.264 data via a radio data modem. That can work, but the absolute minimum delay through the system is the number of frames in an H.264 group of pictures, which may be a dozen or more. The Bolt doesn’t do that. Though the design essentially trades off noise for immediacy, there’s an argument that it isn’t really compressed at all. 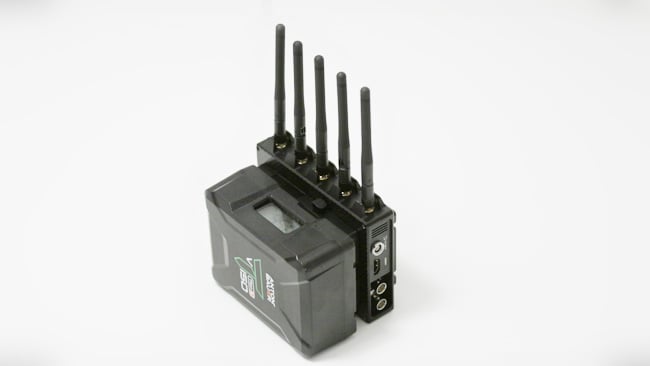 The receiver has the antennas at right angles to the conventional battery mount orientation, to suit various monitors

The advantage of this is that when a Bolt link starts to become marginal, it doesn’t break up into a psychadelic mess then freeze like H.264 would; there’s just a sparkle of noise, and things recover quickly. In use, Bolt 4K is the next best thing to plug-and-play. Navigating the menus on the TV to select the right input took longer than latching the battery plates together and attaching one SDI and one HDMI cable. When changing signal formats, the reconfiguration delay is ten seconds or so. There is a small, simple menu, with the option to show temperature and battery voltage or to set basic options such as bluetooth control (using the company’s app) or to pair transmitters together.

If anyone complains, they’ll mention power consumption; at a specified 20W, the Bolt 4K might push the whole Ursa Mini Pro outfit to well over 60, which is likely to discharge batteries reasonably quickly. Still, if we want low-latency 4K HDR pictures and no cables, those are the breaks. One of the biggest advantages is the crafty radio encoding scheme, which ensures any interference which does occur is much better handled. The company is also eager to promote the idea that the new Bolt 4K brings more to the table than just resolution. It’s hard to test, but less demanding formats make for improved reliability over what preexisting HD links could achieve. 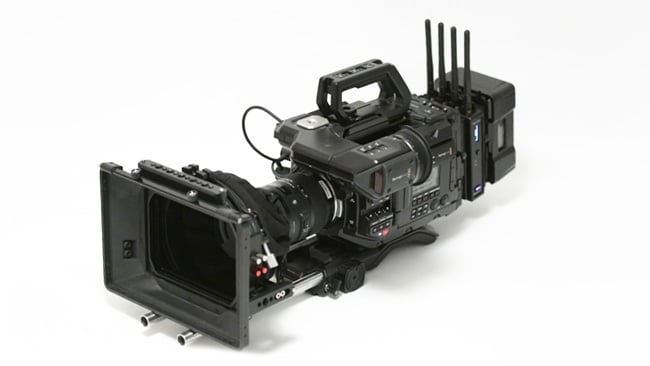 4K all the way. It's true because it rhymes. And becuase it's actually true

The functional simplicity of the user interface belies the huge complexity of what’s going on underneath. In the end, though, it’s replacing a piece of cable, so it’s good that it is, at least by default, determinedly uncomplicated. The cased Teradek Bolt 4K 750 kit with transmitter, receiver, cables, power supply and mounting accessories sells for around £5000 plus tax.