How to build a full 4K shooting kit on a shoestring 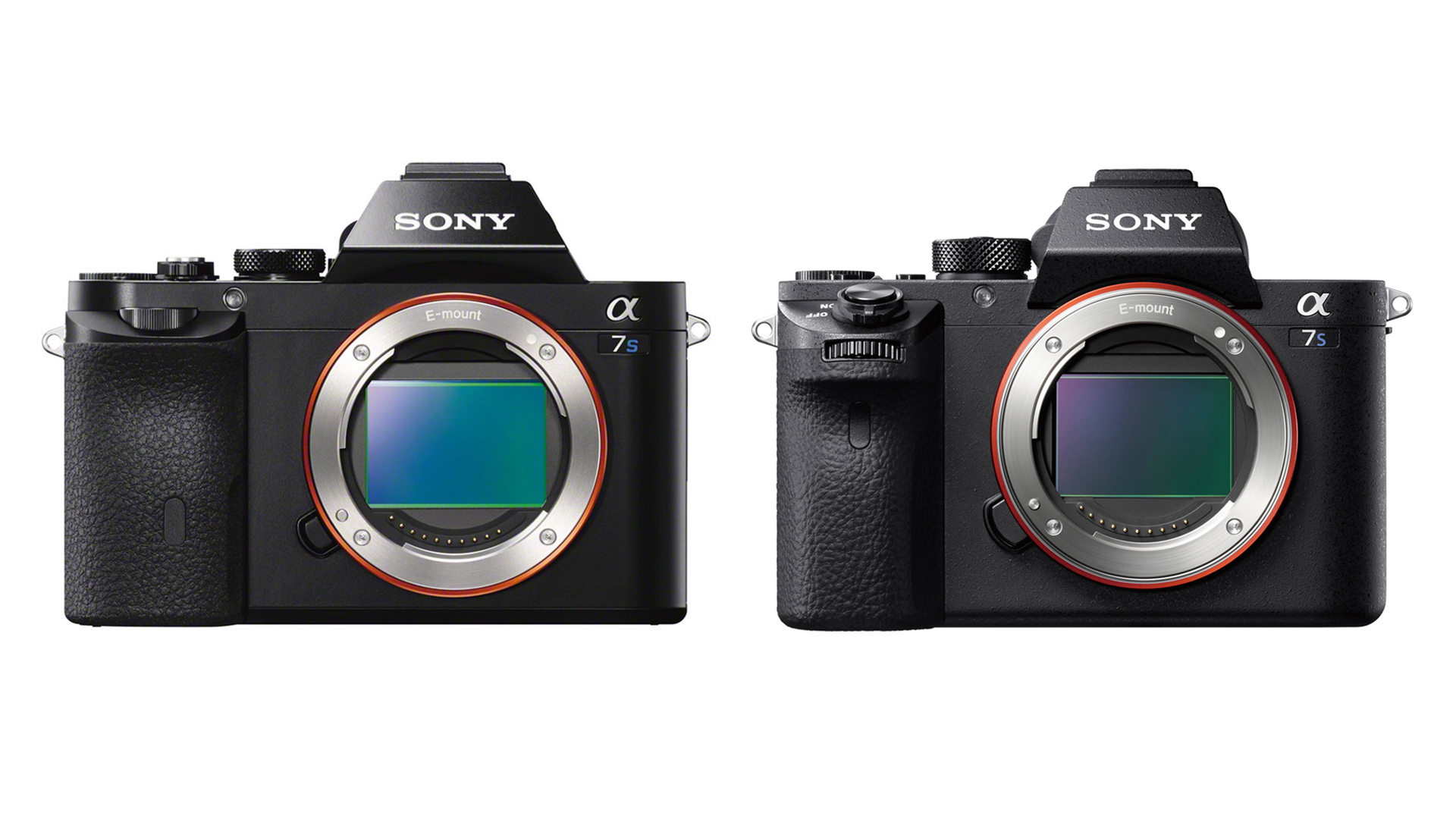 Spot the difference. The A7S II offers some big new features over its predecessor, but you can still do very effective work with the Mk. 1

Replay: You don't need the latest gear to shoot effective 4K HDR. If you know where to look and what to look for you can build a full shooting package on a very modest budget indeed. Here's how.

Like cars, shiny new camera equipment loses a huge chunk of its value when it’s taken out of the showroom. So, when we looked recently at package deals and the best way to buy camera gear, there was suggestion lurking in the final paragraph that rather took our editor’s fancy:

You don’t always need to buy the latest thing. 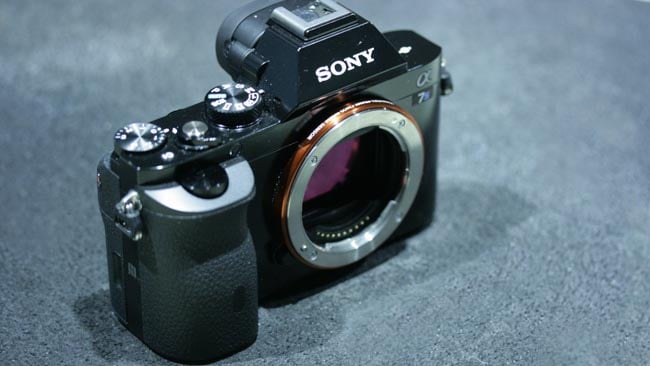 Manufacturers have in some ways made their own lives difficult by making such good gear in the last few years. Without wanting to unfairly pick on Sony, we’ll use the a7s series as an interesting example, because it’s well known, well liked and because there’s a mark-2 to provide a clear point of comparison. What’s really important, though, is not so much the camera we end up with, but the gear we put around it.

A new (at the time of original publication) α7S Mk. II costs around £2000 body-only (the package tends to include a battery, power supply and not much else.) At the time of writing a Mk. I was on eBay, buy-it-now, for £650. To be clear about what we’re losing, the biggest new feature in the Mk. II is onboard 4K recording. The Mk. I will output 4K but not record it internally, which is a shame, because recording 8-bit 4K at 100Mbps with 4:2:0 colour subsampling is a really good way to get nearly-ten-bit, almost 4:4:4 HD pictures by downscaling, and without having to carry an external recorder. Given that many people will be looking at DSLRs or mirrorless cameras specifically so as to travel light and work fast, onboard 4K is no bad thing. 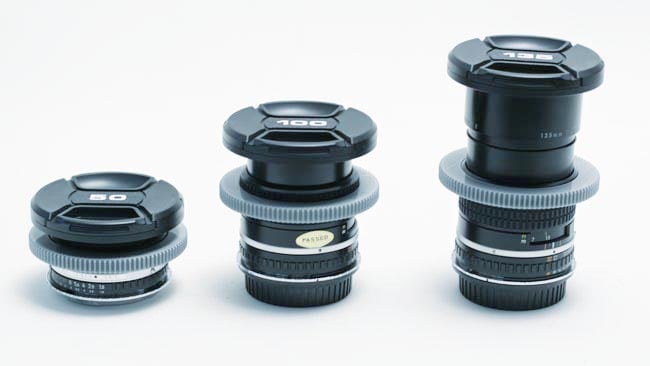 Three of the five Nikon Series E primes. The gears are an add-on. Consistent focus gear positioning is... something we sacrifice at the altar of affordability

We also lose the 120fps HD mode, something that music video or sports filmmakers might rather retain. Finally, it’s difficult to judge accurately since noise is hard to characterise, but there have been claims that the Mk. II is up to a full stop faster (or less noisy) than the Mk. I. It is, according to guarded comments from Sony, the same or almost the same sensor so this may represent advances in signal processing or just a more generous hand with the noise reduction. The Mk. II is a very worthwhile update.

On the other hand...

What we gain from buying the previous incarnation is around £1350 to put the rest of the package together. Naturally, there are all kinds of ways to accessorise a video-capable stills camera to suit various tasks, and you will have to tolerate the idea of building a rig in the first place, but let’s assume that you’re looking to do short narrative films, music videos, and the sorts of things that people on the very strictest of budgets tend to get up to.

First, let’s make a better recording and gain a better ability to see what we’re doing. There are Atomos Ninja Flame recorders on everyone’s favourite online auction for about £550, and would make a sensible purchase. For similar money, we can get a new 5” Ninja, but we’re talking about a 4K camera and a 7” display already feels small. The Ninja will also give us very well-implemented pixel-for-pixel zoom, a bevy of test and measurement options, the high power backlight for daylight readability and far better recordings than even the Mk. II camera would have. Yes, external recorders rather ruin the handiness of stills cameras, but for the sort of work we’re discussing it’s worthwhile. 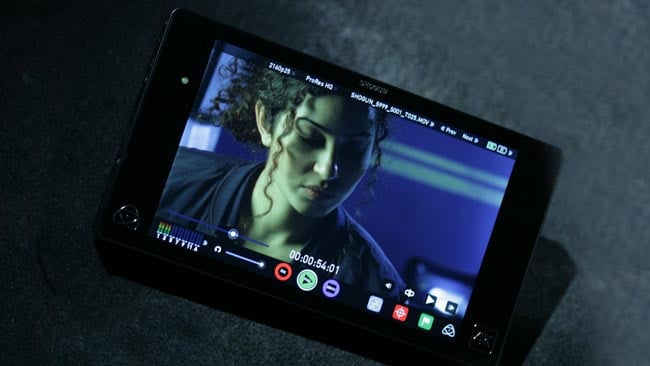 This is a Shogun, but the Ninja Flame has a similar seven-inch display. Buy whatever's affordable

Next, let’s get something to put it on. Used sets of fluid head and legs from Vinten’s ProTouch range are often in budget, but searching around might reveal an old Vision 3 ENG tripod that we can afford. You won’t get a two-stage tripod for this money, and the Vision 3 will need its very lightest spring to accommodate something as featherweight as a stills camera, but it’ll certainly be a tripod for life. 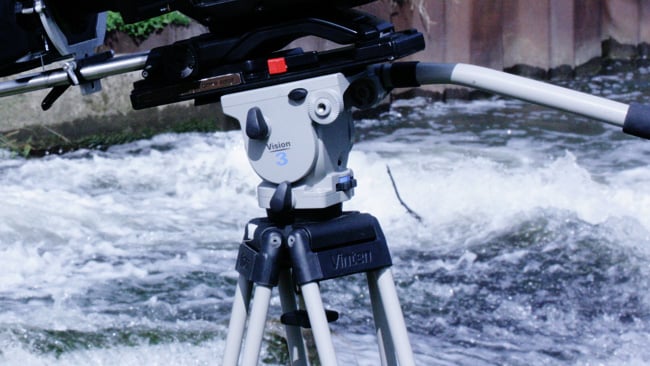 Finally, lenses. It is possible to get a complete set of fully-manual prime lenses for about £450 if you’re willing to buy the Nikon Series E, which were released in the early 80s as a low-cost alternative to the Nikkor Ai-S series which were then an expensive, high-end option. The Ai-S are now something of a desirable moving-image lens set for the severely underfunded, although their well-built, all-metal construction and surprisingly consistent optical performance demand a premium: they can cost several hundred apiece. The Series E, which admits a little plastic, are a more affordable (and available) option for the first-timer, and are still less plasticky than many modern lenses. The focus goes the wrong way, which is a perennial Nikon quirk. The Nikon lenses will require an adaptor from Nikon F mount to the α7S E-mount, but we can afford that. 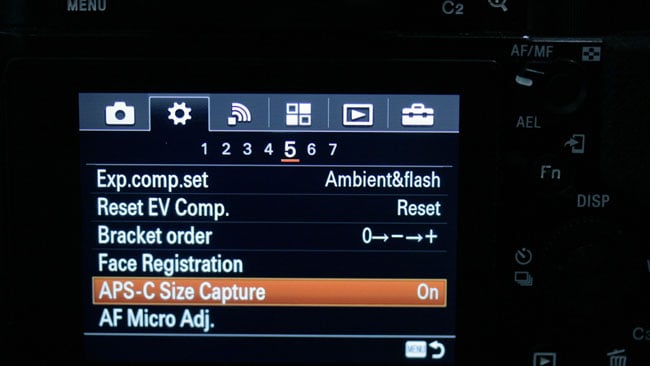 Options for future upgrade include gears for the lenses and perhaps an optical relay adaptor which would bring even more spectacular low-light capability to the α7S; run it in cropped-sensor mode, for HD pictures, and the already-fast Nikon Es become even faster. Add a simple 15mm baseplate and follow focus, and you’re in a position to mount a mattebox and operate at least somewhat like a full size camera department, having spent not much more than we would have on the latest toys, body-only.

There will always be reasons to get the latest thing, and in this example one big reason would be sheer portability of the 4K recording option; we’ve built a rig, here, that approximates a narrative production camera, and which wouldn’t suit the run-and-gun documentarian. Still, for only a little more than £2000 we’re shooting 4K HDR, and no matter what you buy today, in a year, it will still be yesterday’s camera.