How quickly is 4K being adopted in the home? This seminar told us everything 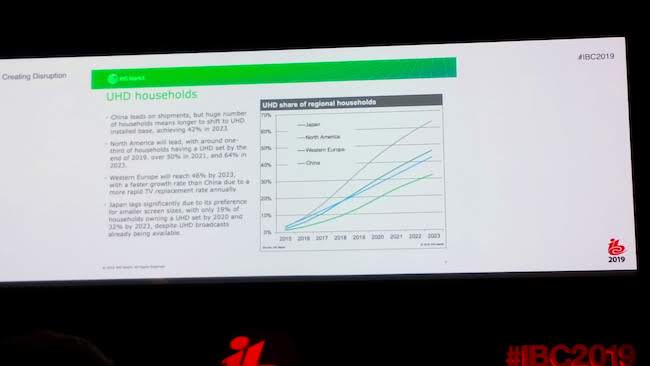 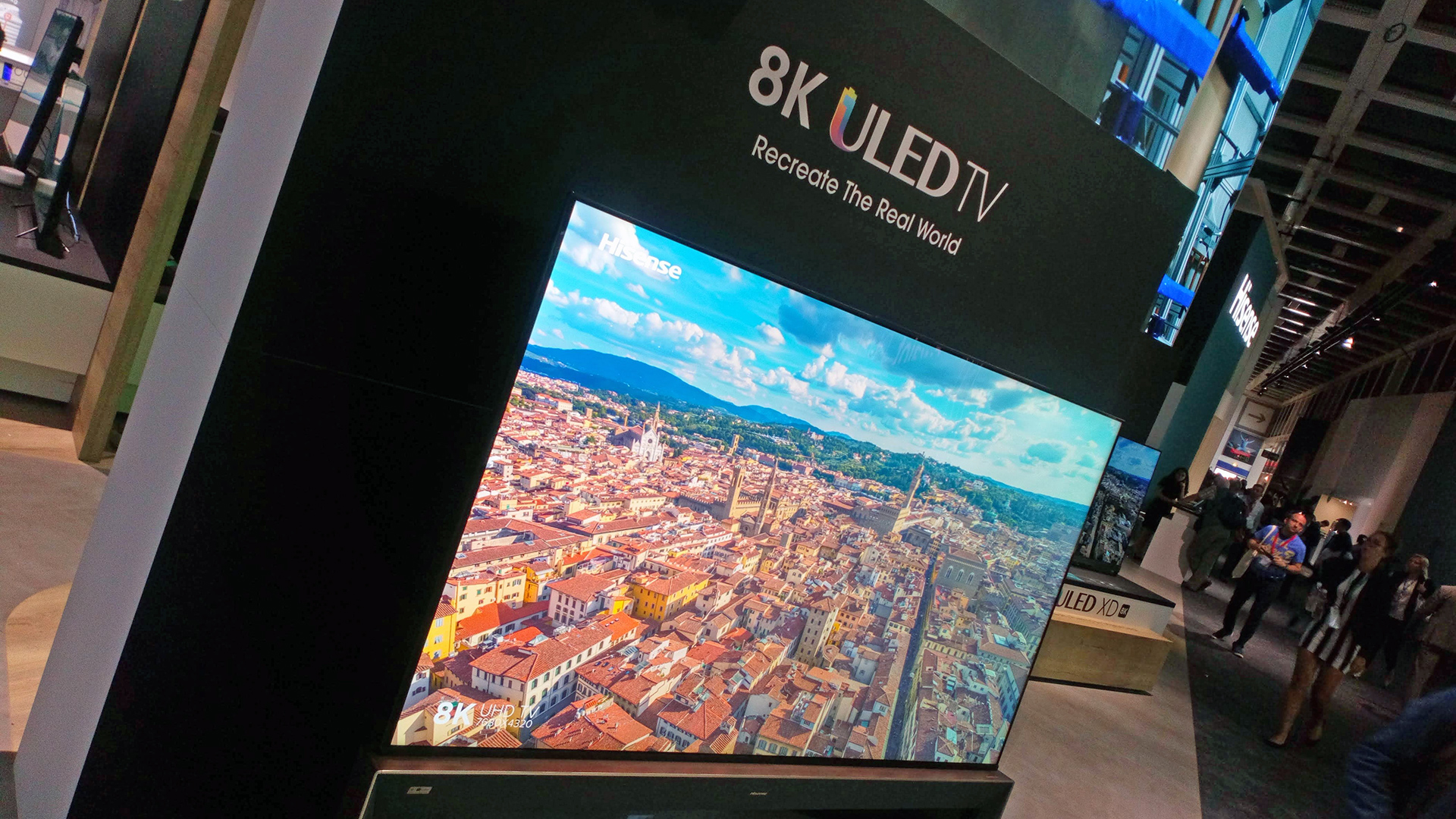 Sony has been using the phrase “beyond definition” in promotional literature for a while, and it’s a very apposite slogan. We hardly need to say that more pixels aren’t really a priority anymore, at least for conventional film and TV (VR differs.) But the adoption rate for UHD makes for interesting reading.

Right now, in September 2019, it’s almost as if two trade shows are somehow arguing with each other.

We don’t usually cover the IFA show in Berlin - we were there looking at Asus’s new monitor. It was interesting though, because while IFA bulged at the seams with manufacturers desperate to persuade us that 8K is now the default, a seminar at IBC told a slightly different story, and backed it up with data.

The RAI’s Forum is an auditorium seating a few hundred people, and it was sparsely attended for a seminar entitled “Beyond the Pixel Race: Preserving Creative Intent from UHD and HDR to 8K and Beyond.” Clunky title aside, the speaker lineup covered a lot of bases, with natural history camera specialist Gail Jenkinson, Mike Zink from Warner, and Maria Rua Aguete from industry analysis outfit IHS Markit. 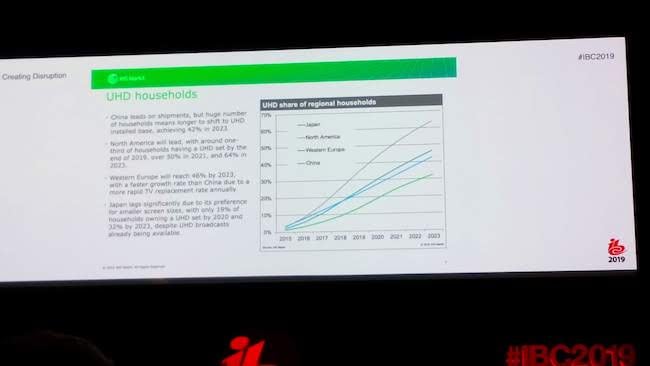 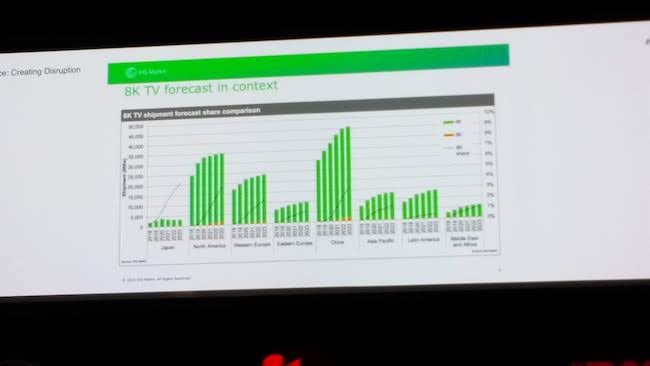 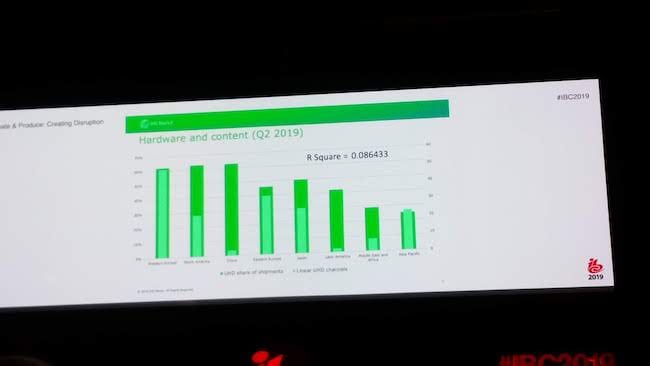 While organisations like Warner are understandably keen to sell people on the advantages of resolution, the numbers, provided by IHS Markit, are actually rather sobering. The fastest growth rates in consumer takeup are in China, although the sheer number of people in the country means that takeup will be only 42% by 2023. Western Europe and the USA currently lag behind, but are expected to catch up to 46% and 50% by the same time, because of a faster replacement rate of home tech in the west.

Perhaps the most surprising result is from Japan, where UHD takeup is likely to struggle to barely 19% by 2020 and 32% by 2023. The supposition is that comparatively few Japanese apartments have space for a TV big enough to make even 4K, let alone 8K, meaningful (the average millennial Londoner might feel the same way.)

It’s a ringing irony in the place where NHK have been very publicly gearing-up for an 8K Olympics next year. Very few domestic viewers will be equipped to enjoy it. The opposite problem exists in the USA and, to a much greater extent, in China, where 4K (not to say 8K) TV shipments proportionally outstrip the availability of content for them. This imbalance is less pronounced in Western Europe, where around 60% of TVs shipped are UHD, and about 60% of “linear channels” offer it, though it’s not quite clear whether that’s new startup channels; certainly in the UK it is not the case that 60% of all TV is available in 4K.

Projected sales figures out to 2023 do show a continued increase in 8K uptake for all regions except Japan. Those increases roll off somewhat, as one might expect for a new technology, though it’s not really clear whether that rolloff is due to saturation (everyone has one already) or a simple lack of public interest. In the end, 8K has always been questioned by people aware that the it isn’t often detectably better than 4K, and there’s some hint the market might have realised that.

Warner’s Mike Zink tells us that the company took care to package and promote 4K with HDR and wide colour gamut, a package of technologies that represent real-world improvements that everyone can readily see. It’s not clear, however, what will be packaged with 8K to have the same effect.

There’s no harm in 8K. There’s every reason to shoot higher resolutions than we’ll distribute. Bayer sensors look much better when scaled down, and Gail Jenkinson, as an experienced nature documentarist, was enthusiastic about the options to crop, reframe and stabilise 8K material. And, sure, if we want to go ahead and distribute 8K, there’s no harm in that so long as we don’t allow the technical challenges to compromise other things.

But we are certainly, as Sony put it, well, well beyond definition, which might mean that it doesn’t really matter whether everyone has an 8K TV or not. What they have is sufficient for the screen size, and that’s enough.