Cinema camera nirvana? Read about our detailed hands-on with the Panasonic S1H

The Panasonic S1H is one of the most hotly awaited cameras right now. Phil Rhodes got to use a pre-release version of the camera in LA last week. We think he likes it! Read on to hear his thoughts, and to see some all important test footage.

One of the benefits of shooting with things that look like stills cameras is going incognito. OK, the new Panasonic S1H is a big, chunky object more than large enough to be a DSLR even if it is actually a mirrorless machine. That’s OK, it makes room for that big, compatible lens mount, and we can still slip through the crowds without anyone thinking we’re much more than an enthusiastic amateur.

This article is based on an afternoon and an evening of doing just that. It’s an unscientific test and I won’t be drawing any very scientific conclusions, especially since the camera I saw was a pre-release version that might noticeably change between now and a more formal review. Panasonic asked that we make that clear, but didn’t otherwise supervise or interfere in any aspect of what we did.

The afternoon began with the generous hospitality of Illya Friedman of Hot Rod Cameras in Burbank, who lent us a set of Spirit Lab’s distinctively mauve Prime AI lenses, which cover full-frame, and a PL mount adaptor to suit the camera’s Leica L mount. Hot Rod also donated some space to shoot a few charts and generally get more of a feel for things than we had in the previous couple of days. In the company of estimable director of photography Elle Schneider, who shot some of the material you can see below, we then wandered through the LA County Museum of Art and Hollywood itself as the sun went down, shooting mainly with Panasonic’s own Lumix S 24-105mm f/4 lens. 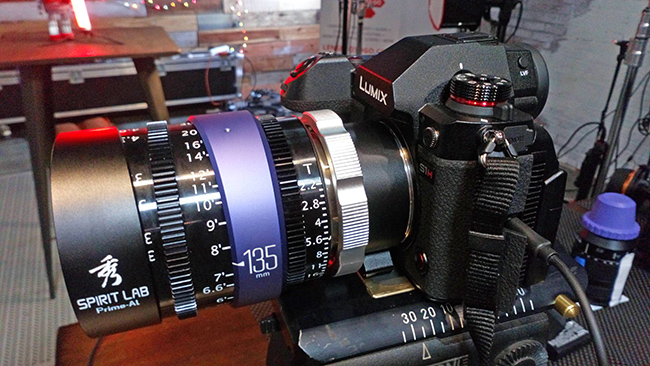 Let’s start our observations with the fact that despite the SH1’s formidable profile, it would probably have been quite difficult to shoot inside a diner at night with a full size cinema camera, just from an organisational point of view, never mind the issue of trying to light someone with a cellphone. That’s great, and there have been cameras around that will sort of do that for a while, but very few of them (actually, none of them) will shoot 6K full frame images to a 10-bit codec.

One of the things that Panasonic’s people were anxious to discuss at the launch was the laudable decision to make a very light touch with noise reduction, which can always be done much better in postproduction than it ever could be in camera. Looking closely, we see that the S1H’s images at its 4000 ISO setting (the higher of the dual ISO options) are so low in noise that it risks looking like it’s been rather aggressively noise reduced, though artefacts of that happening seem fairly absent and the pictures are generally persuasive. Yes, the uncorrected log looks noisy on a conventional display; it always does, from any camera, because that’s not the right way to view uncorrected log.

In brighter conditions, the 640 ISO option will still be too fast, and there are no internal ND filters on the S1H. Most users will need to carry a selection of external ND filters. It’s not clear whether the camera is particularly sensitive to IR pollution, but very high density stacks of filters risk this becoming an issue on more or less any camera; that’s something for a more formal review. Whether the S1H really produces pictures that look like a Varicam is difficult to objectively establish outside a lab, but in general it seems that the full frame sensor is large enough to give ample area to 6K’s worth of pixels. It doesn’t seem compromised by the high resolution, and highlight clipping is well handled when it does, inevitably, eventually occur. If there’s a smell test as to whether something makes pictures that are plausible in the world of high end, modern digital cinematography cameras, the S1H passes it.

It’s a fair bet that most of the productions that use the S1H, especially if they’re treating it as an A-camera, won’t actually shoot 6K other than for special occasions. The absolute highest resolution limits frame rate option and naturally uses the largest area of the sensor, making the greatest demands on lenses (though the Prime AI 135mm covered quite happily.) It’s certainly a good tool for anyone shooting something like wildlife, creating lots of options to frame for a smaller image then use the excess pixels to correct the framing of an unexpectedly-leaping lizard in post. That  would probably require shooting on a full-frame zoom (Fujifilm have them; they are not cheap.) In general, though, 6K full height, occupying the entire sensor, will give way to less data-hungry formats that are closer to a normal cinema frame.

The advantage of all those excess pixels, if there is such a thing, is that even cropping in to allow a 35mm-oriented anamorphic to cover still gives us an image near 4K. A lot of the material shown by Panasonic had been shot on Atlas anamorphics, which looked wonderful but raised the somewhat ungenerous question as to whether all this resolution is just there to be glossed over by lenses with - erm - character.

But enough of picture; it’s a 6K full-frame movie camera and it behaves as we’d hope it would behave, not that that makes it any less of a first. The pictures are nice. There is some rolling shutter - worse on the larger frame sizes, as we’d expect - but it’s perfectly reasonable for a camera in its class.

The user interface of a stills camera is never ideal for moving image work, and the S1H is no exception; like most modern stills cameras it has a menu system that can require, for instance, changes in several places to make a high frame rate mode available. There’s some attempt to work around this by providing a search function, of all things, which will look through the huge number of frame rates and resolution to find something close to what the user wants. It’s a neat trick but it’s hard to shift the impression that there has to be a way for all manufacturers to make menus less of a time sink; perhaps let me pick by any characteristic I want (frame rate, size, codec, etc) then show me what options I must accept to achieve that. Still, it works, and the Varicam-style status display option for the LCD screen is a really nice touch. And yes, the batteries last some significant proportion of forever, which is a good thing.

It’s hard not to come away smiling. We’ve often discussed the idea that cameras will hit the end of invention at some point; where even the most basic models offer more than enough for any imaginable job, at least in the realm of conventional cinema. The Panasonic S1H is at least a small step toward that nirvana. And while “nirvana” is a powerful word, it’s not unreasonable to associate it with all of those anamorphic shorts the company commissioned to show the camera off. It’s very capable, though it still seems a bit expensive; many indie filmmakers will balk at four grand plus glass. But, in every way it can be, without having been on a test bench, it is great.

View the test footage below