This was once essential to post production, and we bet you've never heard of it! 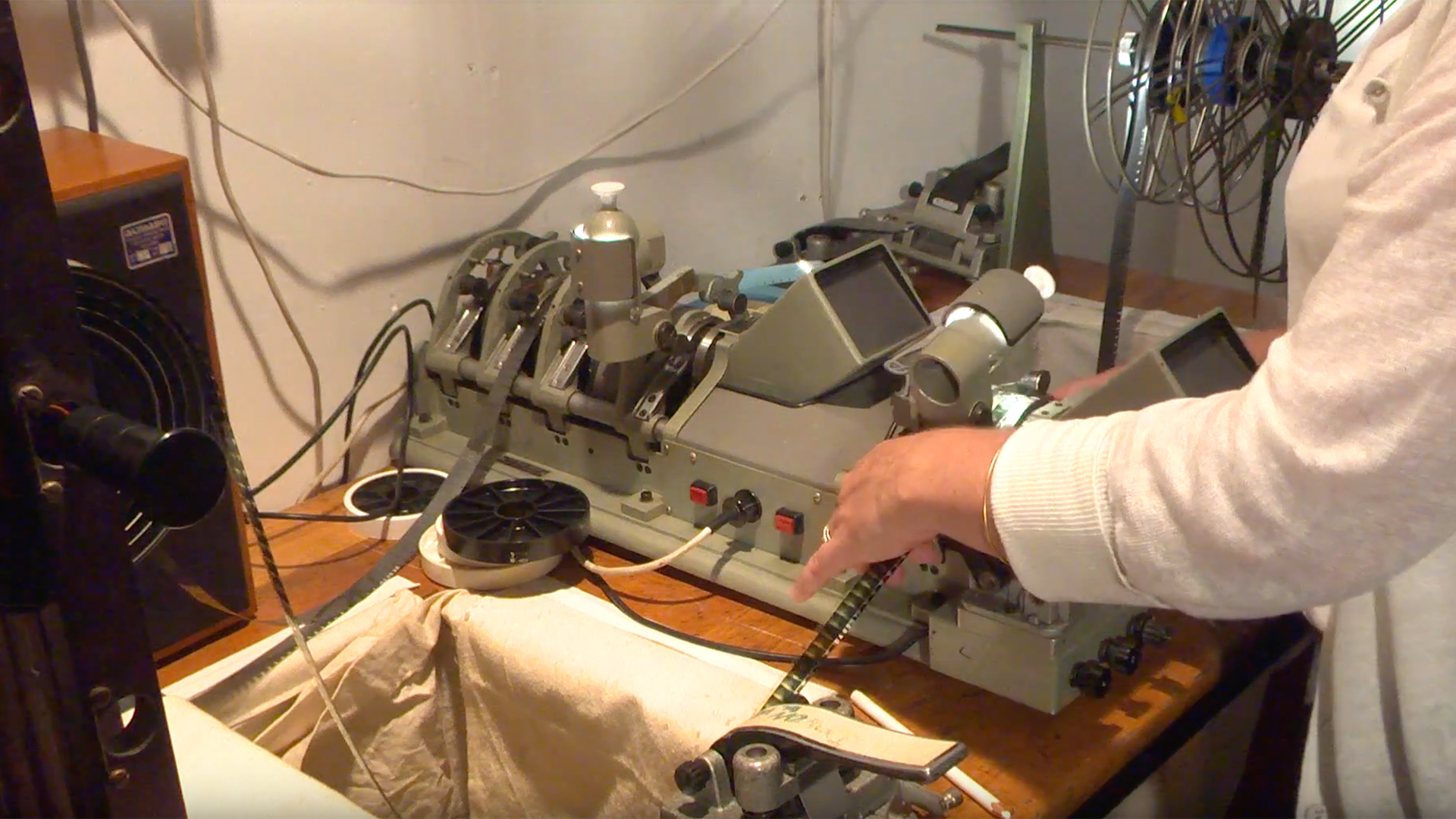 Replay: Rubber Numbering, those words will either evoke a twinge, possibly a tear, of nostalgia or a baffled shrug. It might sound like a relic from Britain’s colonial days, but it was neither made of rubber nor meant to enumerate it. It was, however, once an essential part of film post production.

‘Rubber numbering’ was the colloquial British term for edge numbering or edge coding machines (the ‘rubber’ allegedly referred to a latex-based solution that the first machines used). There was a constant demand (all film editors needed it) and a limited supply (these were specialist machines made in small quantities), so it could end up as a ‘nice little earner’ for those who possessed one. But to explain what it actually did and why it was essential, we have to look back to how film editing technology worked in pre-digital days. 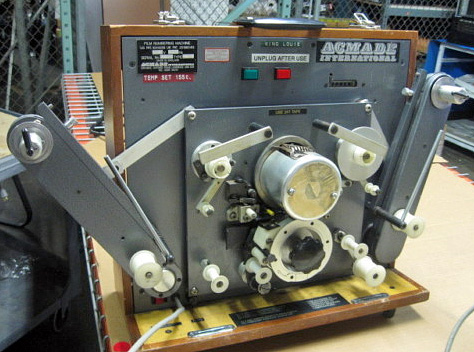 Audio for film in the latter half of the 20th century was usually recorded on ¼” tape and then transferred to perforated magnetic film. The rush prints (or dailies) of the film, either 16mm or 35mm, needed to be synced up to the audio track, usually by lining up the clap of the slate. The assistant would sync up picture and sound, inserting blank spacer where necessary, ending up with a roll of picture and a roll of sound, perfectly in sync. The problem then was once you started cutting picture and sound you would very likely lose sync unless you meticulously marked every cut, on both sides and both rolls, with a unique number. The alternative was to put matching numbers throughout your newly synced rolls so every picture cut could be matched to its corresponding audio. And this is where the rubber numbering machine came in. 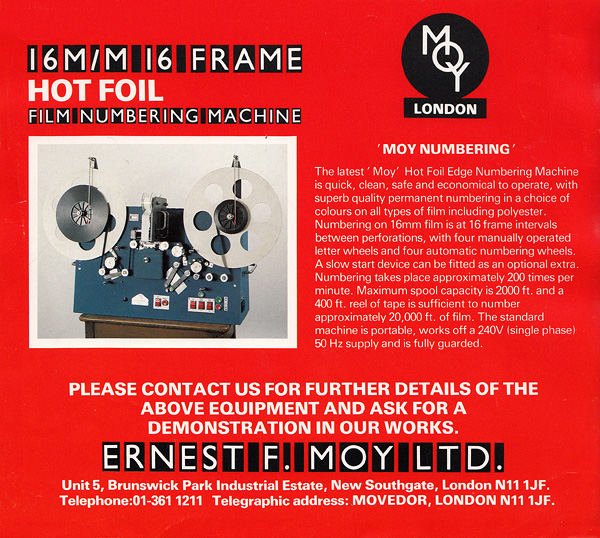 The machine was a simple mechanical device that took the synced rolls and stamped matching numbers on the edge of picture and sound as they were fed through, using a hot-foil process or adhesive tapes, effectively putting physical time code on both rolls. These numbers should not be confused with the edge numbers or KeyCode numbers manufactured into the negative that were used to match the original negative to the cut print (the cutting copy) at the final stage of the editing process. Here’s a short film that shows the process.

The major manufacturers in the UK were Acmade (the inventors of the Pic-Sync) and Moy (famous for their geared heads), but there were a couple of smaller competitors too. Many editing outfits benefited greatly from the income of a machine clunking away in a back room. If a TV company had come back from a shoot with a lot of material that needed syncing and numbering, they would often farm out the work to any available facility.

While people still edited on film, the rubbering numbering machine was in demand. Although time code was being used in the 1980s both on audio recorders and cameras (either exposed onto the negative by the camera itself or by the use of clapperboard [slate] that displayed time code), editors still needed the physical numbers on their rolls in the cutting room. It was only when the negative was transferred directly to video that time code came into its own; timecoded rushes would be automatically synced in the telecine suite. 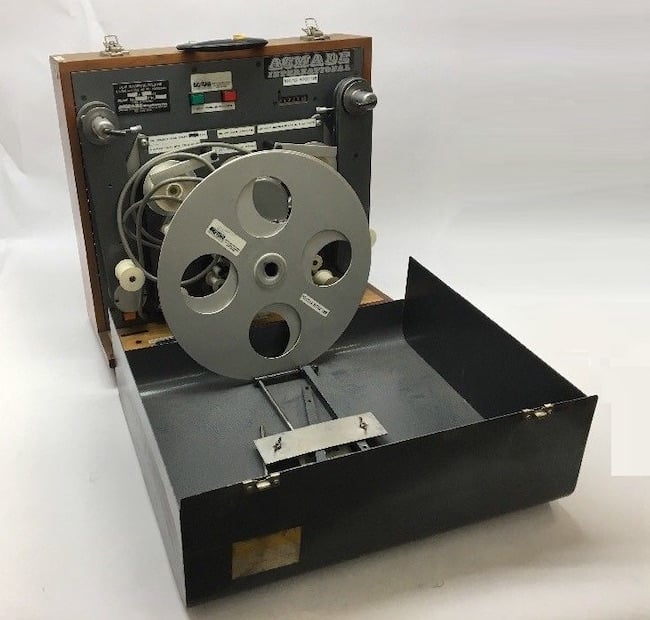 Of course, today the rubber numbering machine has now been confined to the dustbin of history and you’d be hard-pressed to find one outside of a museum. Its last appearance on the world stage was in 2013 when Ken Loach, probably the last major film director to actually edit on film, made a global appeal for tape for his numbering machine. The unlikely saviours were Pixar productions in California who FedEx’d over their last 19 rolls.

So, what is of interest to us today about the rubber numbering machine? Well, it is, perhaps, worth reminding ourselves how astonishingly simple editing had become since the labour-intensive days of cutting on film. The notion that time between shots was represented by physical material (spacer) seems positively quaint today, just as the idea that both picture and sound could be physically hung up in a trims bin might have a certain appeal to analogue enthusiasts.

Ken Loach aside, I can’t imagine that anyone wants to go back to those days, but in the digital world there is really no equivalent today of a simple but custom-built mechanical device that can not only produce much-needed income for a production or post production company but can also offer an entry point for newcomers into the industry.

I wonder if there are any readers here whose first job in the business was running a rubber-numbering machine in the back room?