Zilr's short HDMI cables are perfect for camera and recorder use

Review: What is there to say about an HDMI cable? Well, quite a lot, if we really want to get into it. Phil Rhodes looks at the camera and recorder focussed short HDMI cables from Zilr.

The photo below shows the business end of Zilr’s short HDMI links, which are available with a type A connector on one end, and a type A, B or C on the other. They’re all about a foot and a half long and clearly intended to work as links from DSLRs to monitors or recorders, with attention paid to keeping the cables slender and minimising the bulk of the connectors. HDMI was really designed to be used to hold together people’s home audio-visual setups then implemented on cameras because it’s small, inexpensive and capable, so a set of cables made to offset that as much as possible is a good idea. 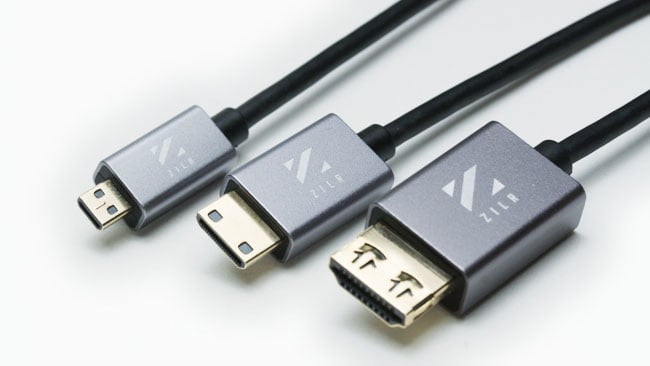 Zilr HDMI cables (the other ends are all full size)

HDMI is a complex thing which works with admirable simplicity in practice. Consider that the company states these cables support 4K pictures at 60 frames per second. The specifications for HDMI (after the very earliest versions) actually allow it to carry more or less any resolution imaginable up to a certain total number of pixels per second. Within reason, HDMI cables themselves do not formally impose a limit on what can be done, beyond their ability to carry the signal without degrading it to the point where that bandwidth can’t be achieved.

So HDMI is flexible. It’s quite possible to define a display twenty pixels high and ten thousand wide and the system will handle it. Things along those lines are often done in special circumstances such as driving strangely-shaped chunks of LED video walls that become part of a gameshow set in a TV studio. While the HDMI specs mention specific colourspaces and brightness encodings, many modern cameras will happily send log, wide colour gamut or other things down an HDMI cable in the expectation that a competent user understands what to expect.

Zilr tell us that these cables will handle UHD (they say 4K) at 60fps, which suggests that they’re intended to work with HDMI 2.0 or 2.0b devices achieving bandwidths up to perhaps 14.4 gigabits per second. Various specifications have been developed for describing the capability of HDMI cables, involving phraseology such as “standard,” “high speed” and “premium high speed.” Given the frequent mention of HDMI 2.0 capabilities on the website, Zilr’s cables would presumably be a “premium high speed HDMI cable with Ethernet,” in the words of the standards. Given they’re reasonably short and seem to use good-quality connectors with a nice positive fit, it’s possible they’d go faster, but that’s apparently what we can rely on. It’s interesting that HDMI 2.0 is considerably faster than SDI, which just about achieves 12Gbps, although the two things aren’t very comparable in terms of intent, electronic implementation or physical build. 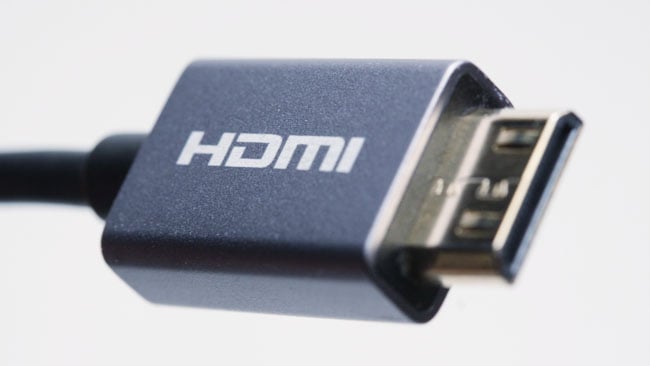 4K (or really UHD) pictures at 60 frames do approach the limits of what HDMI 2.0 will do, demanding just under 13 gigabits per second. Zilr also mention HDR, and in particular HDR10, which generally requires 10-bit signals and thus a 25% bandwidth overhead compared to standard dynamic range of the same resolution and frame rate. HDMI 2.0b devices will be starting to run out of steam at that point, since 4K, 60p, 10-bit images would require nearly 16Gbps of bandwith; often, 4:2:2 colour subsampling is used in that situation.

Things are still changing. HDMI 2.1 expands bandwidth to more than 42Gbps, allowing for those 4K, 60-frame, 10-bit pictures without colour subsampling and plenty more all the way up to 10K at 120fps, with a degree of compression used at very high resolutions. Version 2.1 includes other interesting updates such as “quick frame transport,” intended to reduce lag in pursuit of a better VR headset experience. The HDMI people refer to cables designed for HDMI 2.1 as “ultra high speed” and it’s not clear what that means in terms of engineering or how it will interact with existing gear. 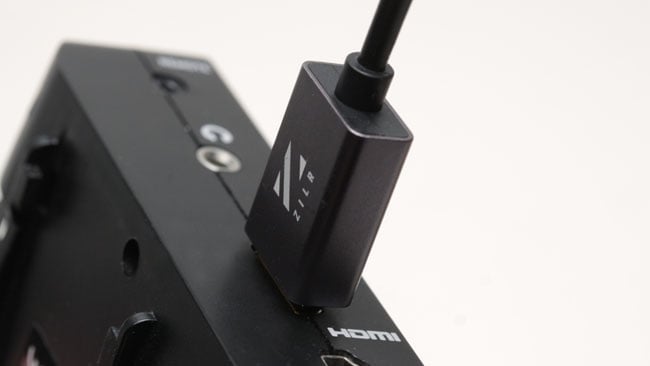 The connector demating force is quite large. The company says 8Kg, which is good, although it's probably not a good idea to suspend gear from cables

There’s no real way around the fact that HDMI connectors, particularly the smaller types, are nothing like as tough as a BNC, but Zilr seems to have done everything they reasonably could for circumstances where we just need to handle HDMI. Particularly, there’s no huge strain relief boot on the back of the connectors to make them stick out hugely on the side of a DSLR, and the cable itself is as slim as a multiple twisted-pair cable can be, and fairly flexible.

They sell for US$30 apiece, and the company has also recently started importing to the UK as well; find a dealer at zilr.pro.