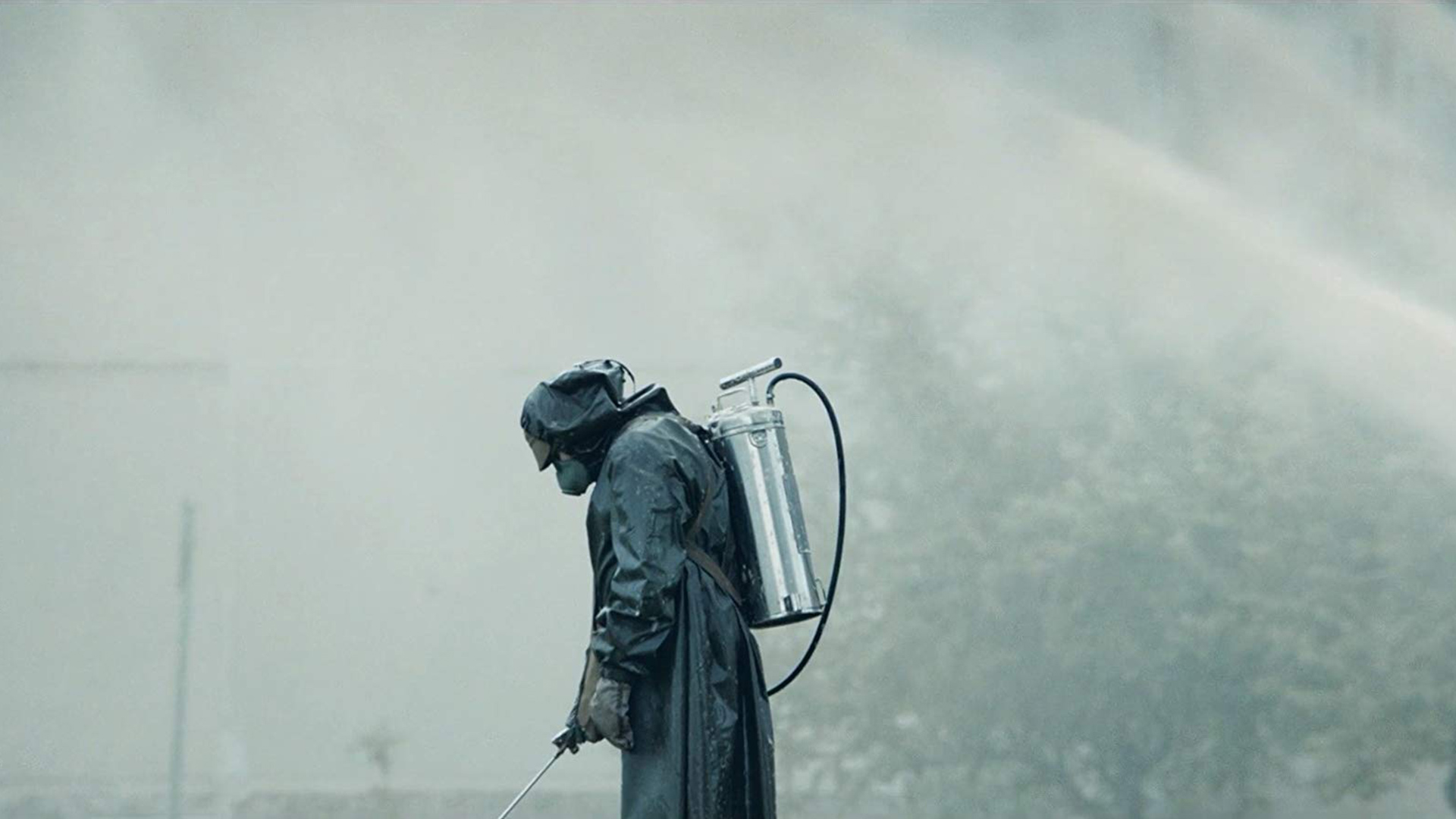 It’s not normally our purpose here to review film and TV productions. Occasionally, though, something emerges that’s so unique that it bears talking about, if only because it’s sometimes healthy to stop counting megapixels and look closely at what all this is really supposed to be about. We take a look at HBO/Sky's recent harrowing and thoughtfelt miniseries, Chernobyl.

Ordinarily, anyone presenting a script containing lengthy dialogue scenes covering the technical details of operating a 1980s Soviet nuclear reactor would be laughed out of a meeting with potential producers. It’s therefore not quite clear how Craig Mazin got Chernobyl produced, perhaps apart from the fact that it is, for desperate want of a better word, a very well-known brand in the language of modern film and TV producers and contains moments of tension that aren’t so much stomach-knotting as psychologically eviscerating. It is not a particularly original subject, given that there has been at least one docu-drama including extensive dramatic reconstructions of the eponymous 1986 nuclear SNAFU, and the facts behind what happened have been well-known for decades. But Chernobyl the series is not only good, it’s rather unique in its approach.

From a camera perspective, the series succeeds in showing huge, spectacular things without seeming to glamourise them. Not much behind-the-scenes footage has been released, but what we have seen shows some fairly big setups, with lighting craned in overhead to simulate the firelight from the burning nuclear plant (and the phrase “burning nuclear plant” has a piquancy of its own.) Parts of the series depicting the Vladimir Ilyich Lenin Nuclear Power Plant itself were shot at the now-offline Ignalina power plant in Lithuania, which, in the Soviet style, was built to much the same drawings as Chernobyl. The Fabijoniškės district of Vilnius were used to represent the workers’ town of Pripyat.

The Soviet Union, especially during its latter years, is often depicted with a sort of stygian grimness which is perhaps not entirely fair – it was, after all, occasionally a nice summer’s day even in 1980s Moscow – though Chernobyl can hardly be blamed for embracing exactly that sort of portentous gloom. Almost nothing but a hard-nosed, documentary-style treatment would have been appropriate; let’s take a minute to imagine what the Michael Bay approach might have looked like. The fact that the production managed to maintain that look while depicting things which must have required a lot of high-end production technique is testament to the work of cinematographer Jakob Ihre, FSF, and his crew, as well as the visual effects people involved. 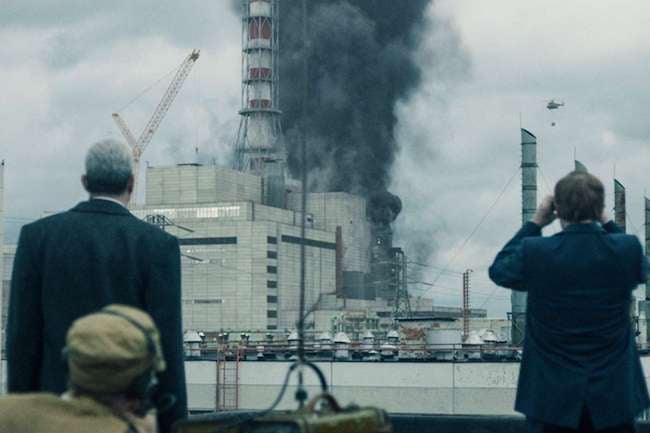 Boris Shcherbina and Valery Legasov look on at the damage caused by the reactor core explosion - Image: Home Box Office

But concentrating on the camera technique of a production which has received a 95% rating on the (notoriously brutal) review aggregator Rotten Tomatoes seems somehow incomplete. Hollywood regularly complains about Rotten Tomatoes, sometimes because Rotten Tomatoes will joyfully aggregate a nine-percent review for a nine-figure production and Hollywood thinks that’s somehow unfair. Chernobyl was not a low-cost piece of television, shooting sixteen weeks for five episodes with some big scenes to cover, so there’s no reason to assume that the Tomatometer is specifically choosing to penalise big budgets. In fact, there’s every reason to hope that it is reflecting a true, and perhaps unanticipated, audience desire for TV that doesn’t patronise. It’s much the same market served by The Martian (91%, say the Tomatoes), a happier but probably just as technical piece.

If that’s a rebuff to the widely-perceived downward plunge in the general intelligence of film and TV, great, but Chernobyl does a lot of other things right too, particularly in its casting and the lead performances. Mazin’s intention seems to have been to make a pointed critique of something that he calls lying, but which is increasingly and too often written off as a normal part of the cut and thrust of politics and statecraft, now at least as much as in 1986. It’s tempting to look down on the former Soviet Union as if western politics isn’t capable of crossing much the same lines, and there are far too many examples of that in 2019. Unfortunately, it’s still not clear whether better communications, the fact that the internet is practically impossible to censor, and increased public awareness is enough to prevent the the power-hungry from provoking just as serious a problem again, without really understanding what they’re doing. 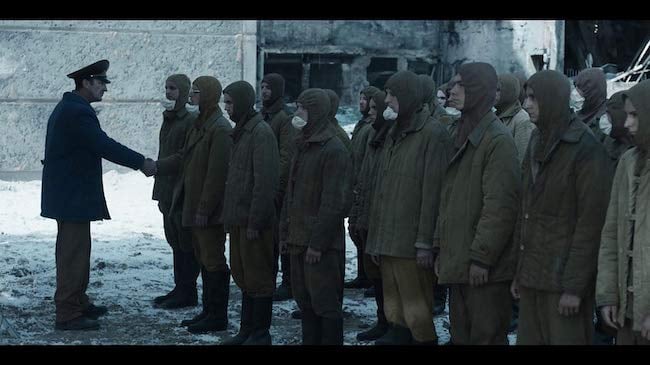 The Liquidators of Chernobyl as portrayed in the miniseries - Image: Home Box Office

The production raises another series of questions over whistleblower culture. Whether or not Paul Ritter’s depiction of Anatoly Dyatlov as a profane, hectoring autocrat in denial is completely accurate, one thing is reasonably certain: had his team rebelled and prevented the accident, they would have faced consequences, and they would have faced those consequences in miserable obscurity. Nobody would ever have heard of the people who worked at a power plant where nothing happened. They faced the choice of allowing the problem to happen and being blamed for it, or becoming unpopular by solving it, ultimately shouldering that unpopularity without anyone’s support. Near-miss accident reporting is designed to help with this, but it’s a difficult problem given an almost-universal culture wherein people achieve authority by political talent rather than experience or knowledge. Enmeshed in the Dunning-Kruger effect, leaders of the modern world are too often unable to comprehend how serious something nearly was in circumstances where it ultimately wasn’t. To have said all that in a production which also teaches its audience nuclear physics is a rare achievement.

Mazin’s magnum opus might be taken as a call for technocracy, or simply for improved leadership from shop steward to head of state. His description of being inspired to create the series simply on the basis of a fascination with how little he knew about it is perhaps less unusual in the days of the YouTube accounts featuring shrieking Geiger counters during trips to “the zone.” What’s new is the ability to actually see that sort of fascination hit the screen in a way that hasn’t been comprehensively ruined by a writing committee. Whether that’s got anything to do with the boom in high-end production provoked by the likes of Netflix and Amazon remains to be seen; HBO and Sky collaborated to make the series and are doubtless very pleased they did. It’s certainly attracted attention for its unflinching description of a technical subject as well as depicting the full horror of a nuclear accident in a way that the nuclear industry itself might find deeply uncomfortable, given that nuclear technology has barely moved on from the 70s and 80s. And if those raised eyebrows leads to TV becoming a bit more – well – highbrow, that’s absolutely fine.