How dangerous is blue light, really? 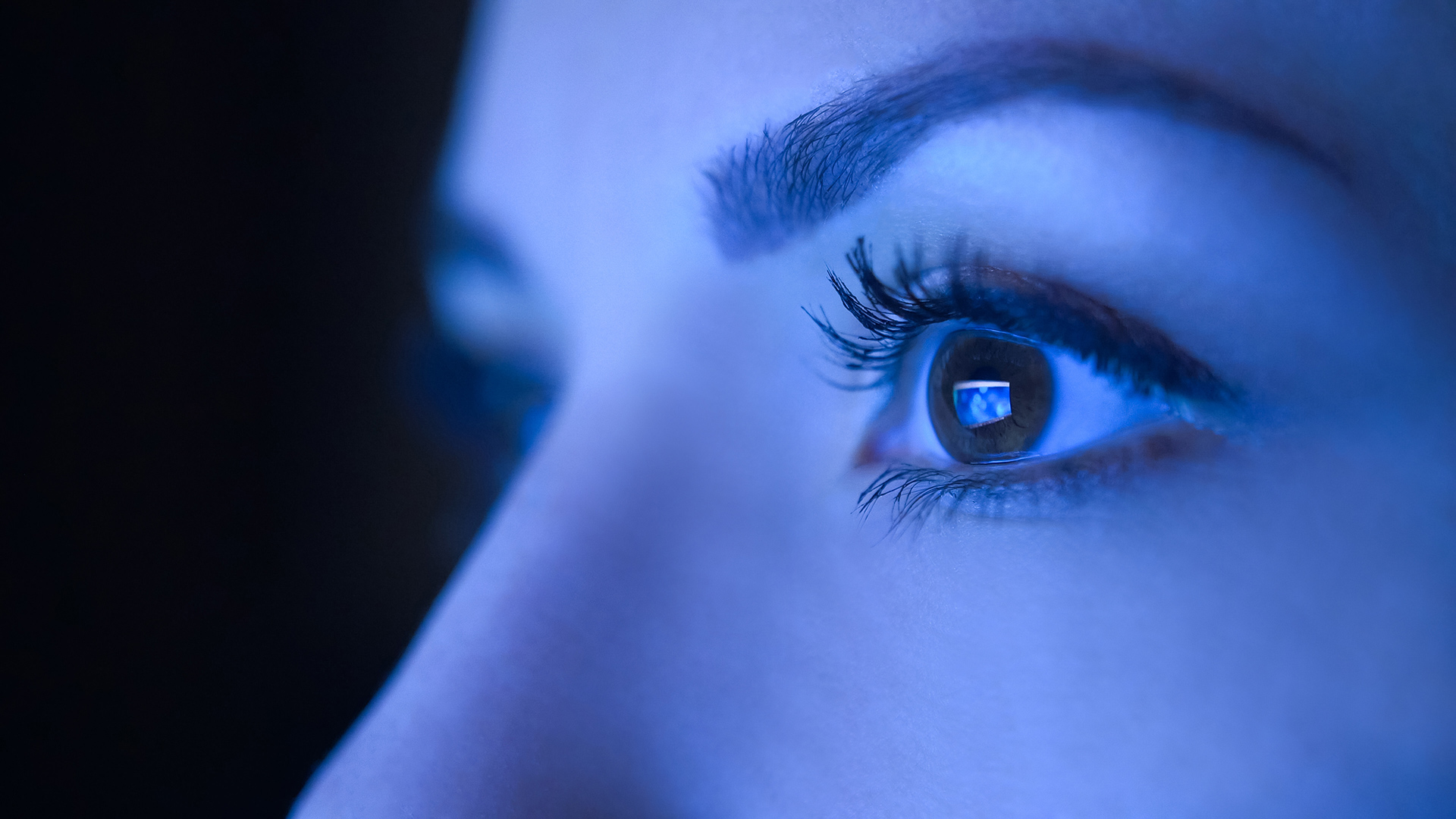 The media would have you believe that the light emitted by modern devices is dangerous. What's the reality?

In the early days of cinema, actors frequently complained of “Klieg eye.” The name comes from a carbon arc light manufactured in the USA by Kliegl Bros. in the early 20th century, a type of light that most film crew would be fully aware, even now, is potentially unsafe if used unfiltered. Naturally, the traditional carbon arc lights still available from suppliers such as Mole-Richardson are properly filtered, but there are also concerns over modern light sources such as LED.

Bright, but not necessarily dangerous

It seems no less than every few months that a well-meaning institution of public health releases a paper warning us of the terrible eye safety problem posed by modern lighting devices. The proposed issue is that devices such as LEDs output a lot of blue light that isn’t typically found in the natural world and that this presents a hazard because it’s sort of quite near to UV or something. It’s true that blue light has higher energy than red light. Does this actually present any sort of legitimate hazard?

On the left is daylight, on the right is an HMI. Both contain significant amounts of blue light

Well, to keep things simple, under most normal circumstances and assuming sane behaviour from people, no. The sun and a blue sky also emit lots and lots of blue light and most people will not, by choice, spend hours staring into uncomfortably bright light sources. Any white light source powerful enough to cause a short-term safety hazard is likely to be uncomfortably bright. It’s also important that we separate some concerns which are often conflated: exposure to light that’s blue (or high-colour-temperature in filmmaking terms) has been blamed for several problems.

Concern has centred around three things: eye strain, disturbance of normal sleep patterns and actual damage to the retina. The eye strain claims seem likely to be related to flickering issues. That’s generally absent in film and TV lighting which is designed to avoid flicker, even very high-frequency flicker, that would be more or less invisible but might create problems when it interacts with camera shutter timing. The sleep problem seems to be based on the (fairly plausible) idea that modern humans evolved to start feeling tired when the light became warmer in the evenings and there is at least some experimental data suggesting that exposure to blue light suppresses melatonin production, potentially affecting people’s circadian rhythms.

Of course, most crew will chuckle richly at the idea that it’s difficult to get to sleep after a week of 16-hour days on a film set. 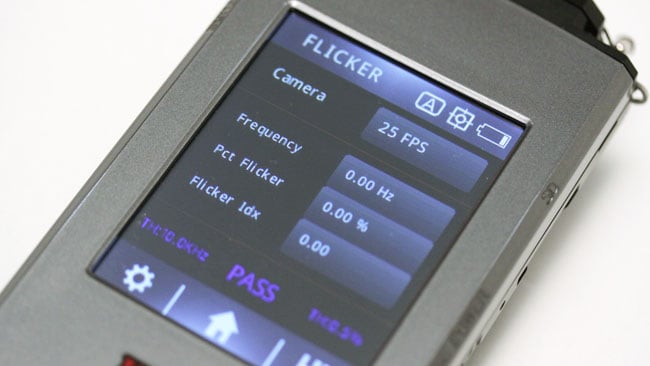 Most movie lights don't flicker at all, certainly not enough to provoke unpleasant symptoms in humans

Regardless of their veracity, neither the eyestrain nor sleep timing issues are properly referred to as “blue light hazard”, which is a term that’s thrown around rather haphazardly. The CIE (yes, the chromaticity chart people) published one of their position statements in April making it clear that blue light hazard properly refers to concerns over damage to the light-sensitive cells in the retina. In this guidance, they refer to the “blue light hazard function”, a piece of mathematics designed to help produce guidelines on reasonable exposure limits, produced by the International Commission on Non-Ionising Radiation.

Anyone willing to pay 240 Swiss Francs can read the resulting paper, IEC 62471:2006, but the abstracts suggest more or less what most learned bodies have been suggesting for years: LED lighting systems, used sensibly, don’t really present much of a hazard. Studies which show problems have relied on using unrealistically huge exposure levels that would normally cause any sane person to blink and turn away, and they have often the more sensitive eyes of nocturnal animals as study models (how this test was run is perhaps not best thought about in detail). 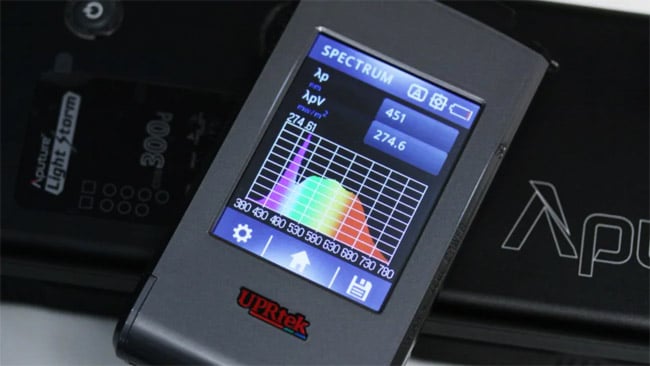 A lot of LEDs have a big spike in output at about 450nm, but (perhaps notoriously) almost nothing below that, which is good for safety but bad for lighting cobalt blue objects

For normal household exposure to low-energy LED lightbulbs or LED-backlit LCD displays, then, there seems to be no great concern. A film set, however, might not reasonably be considered “normal exposure”. Household lightbulbs are a few watts each and even if focussed narrowly might struggle to achieve the sort of intensity that’s quite normal in front of the camera. Perhaps worse, actors might be directed to look at things they might not usually be inclined to look at, such as very bright lights. As late as 1980 ABBA could claim that “Super Trouper lights are gonna blind me”. But are they?

Apparently not, because all four members of ABBA can still see fine, having spent many hours staring in the general direction of multi-kilowatt, highly collimated xenon short arc lights. LEDs generally (even notoriously) have a more limited deep-blue spectrum than the mercury and xenon arc lights that they’re beginning to replace, so they should logically be no more dangerous. Experience would, therefore, tend to suggest that we’re fine, as long as people continue to avoid staring directly into very bright bluish lights for very long periods of time – as one would. 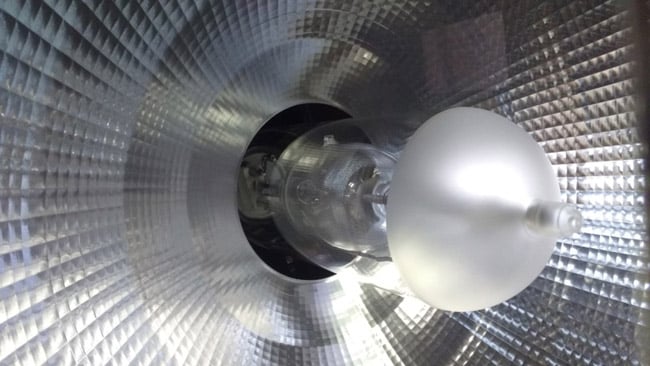 Extremely powerful lights such as this 24KW HMI have not, historically, been known to cause huge problems

But let’s not leap to that conclusion without qualified comment. Professor Chris Hammond is Professor of Ophthalmology at King’s College London and a Consultant at Guy's and St Thomas' Hospital.

He spoke on behalf of the Royal College of Ophthalmologists and said: “The media often reports on the supposed harmful effects of blue light on the eye, particularly around screen use. Actually, the blue light outdoors from the sky is many times brighter than from screens and lighting. Accordingly, human eyes have evolved defence mechanisms to filter blue light and repair any potential damage. The amount of damage that light causes (including blue light) is proportional to how bright it is (its intensity). The unfiltered spectrum emissions are similar for both mercury and LED lights and therefore one should not be more harmful than the other. Individuals ought to nonetheless be wary when exposed to high-intensity light for prolonged periods of time”.

Normal, sensible precautions, then, would seem to be enough, and we should be cautious about alarmist reporting in the popular press.