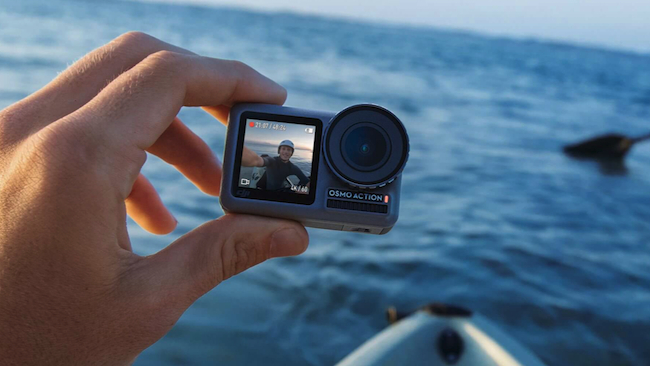 After mounting speculation in recent weeks, DJI is finally entering the action cam market with the $349 Osmo Action. And, as you can see, it’s got screens on both sides.

DJI has never been a company afraid of taking its technology and porting it over into other markets, which is precisely why people have been speculating for what seems like ages now over whether it will enter the action cam market. The gimbal tech it made for its drones was spun off, so surely it would make sense for the camera tech it has developed for them to live and breath on its own too?

So, enter the Osmo Action, a $349 unit that is available for immediate shipping from the DJI online store now and from authorised retailers in a week’s time, presumably when the supply chain is up and running.

Perhaps one of the most interesting aspects of its design is that it features colour screens on both the front and back, which is going to allow for much more convenient scene composition while on the move. The two in question are a 2.25-inch rear touchscreen which uses a water and fingerprint repelling coating, and a 1.4-inch front screen. Both have a brightness of 750-nits, which should make it very usable in direct sunlight. 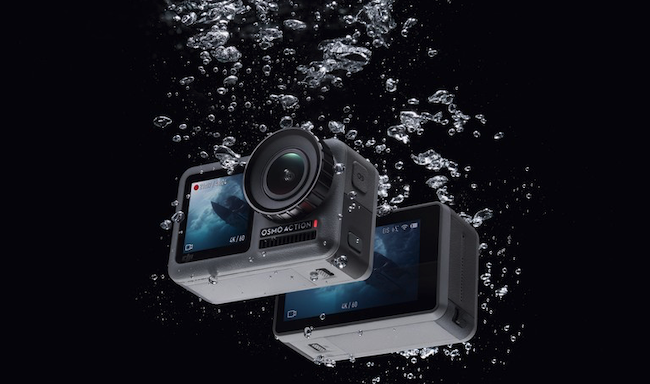 It is the first DJI handheld camera to include RockSteady, DJI’s Electronic Image Stabilization (EIS) technology. A removable battery gives it a run time of 93 minutes recording at 4K/30fps with RockSteady enabled, climbing up to 135 minutes recording at 1080p/30fps without RockSteady. Time-lapse ability and custom expose settings of up to 120 seconds will make use of all that quite adroitly. Dual microphones let users take advantage of Osmo Action's Voice Control, and there’s even a speaker housed in that tiny form factor somewhere.

The company says a three-glass aspherical lens design records low-distortion content and aids in reducing warping effects for improved scenes. The lens cap is finished with two layers of that anti-fingerprint coating again to keep the shot clean during use, as well as an additional anti-reflective coating to reduce the effects of lens glare.

The recently released DJI Mimo app lets you connect an Osmo Action to a mobile device with WiFi or Bluetooth for added functionality, including a live feed of the camera, multiple story templates, in-app quick editing, and more. 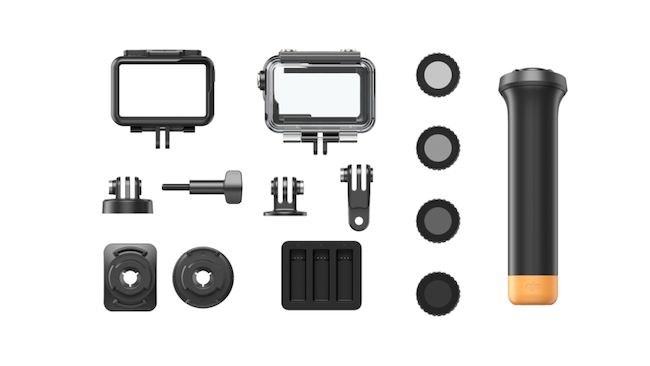 There are also plenty of accessories available above and beyond the included Camera Frame Kit which offers a universal mount for additional accessories, curved and flat adhesive mounts, and a window for the LED indicator to show camera status. These include a waterproof case that will take the unit down to 60 metres with no untoward consequences (the Osmo Action is dustproof, shockproof, and waterproof, though the latter only up to 11 metres (36 feet) on its own); a 3.5mm adapter to connect an external mic; an Extension Rod, which features a rotatable phone holder and a ¼-inch screw adapter; a floating handle; and filters.

There is also a Charging Hub that will charge up to three batteries simultaneously in less than 130 minutes.

Review? Oh, as soon as we can. The Osmo Action looks great on paper, and we're looking forward to seeing quite how well it will perform in real life too.