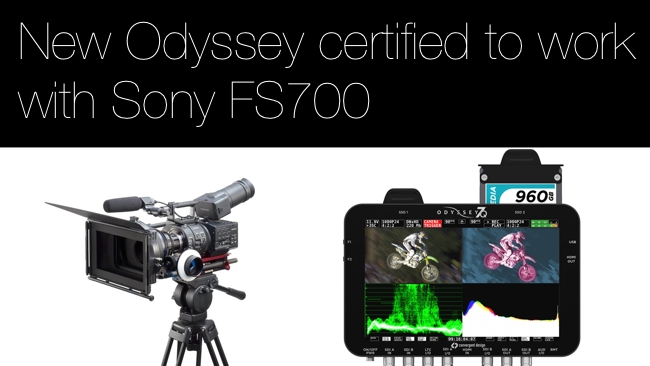 I wrote before about the FS700 and how it was possibly the cheapest route to get to 4K at the time. You can read that article [here]. I was thinking of course about the Sony HXR-IFR5 interface unit and AXS-R5 Recorder combo but now another intriguing and unexpected option has surfaced, the Convergent Designs Odyssey 7Q

You will still need the firmware upgrade to get the 4K data over the 3G HD-SDI connection, but you won’t need the Sony HXR-IFR5 interface unit and AXS-R5 Recorder combo and the Odyssey 7Q makes for a more straightforward option, as you are just basically mounting a monitor on the camera (instead of two extra boxes). It can record 2k at 240fps continuously for 45 minutes using 2 x 960GB SSD’s and can record the full 4K as DPX files for up to 30fps, so it’s presently a bit more limited in recording speeds than the Sony option but it makes up for that in so many other ways.

With the fast moving pace of technology, people are becoming more and more concerned about investing in the latest camera technology because today’s great thing is so quickly yesterdays worthless old tech. To that end I know a lot of people look to minimise investing in camera specific add-ons and try to find generic items that can stay with you as you upgrade.

The Odyssey 7Q is camera agnostic, so you can carry on using the unit as you upgrade your setup but also you can use it in situations where you might rent a camera with a different work-flow to your own. So from the point of view of an FS700 user, you could use it as your outboard raw recorder for the FS700, but then if you suddenly had a much bigger shoot on the go, say a one off shoot on the Arri Alexa, then you could still use the Odyssey 7Q as your recorder on the Alexa too and record Arri Raw! The Odyssey 7Q makes this easy by allowing you to rent codecs if you suddenly need them just for a few days, so you can just rent the Arri Raw licence for your Alexa shoot and then go back to just using the unit for your FS700.

That’s looking at the device from the point of view of being a recorder, but it can also be used as a really high quality production monitor. Not only is it a nice size at 7.7 inches but it is also based on really lovely-looking OLED technology. (The higher end viewfinder for Sony’s F55 for example is also OLED based.) The resolution is a very respectable 1280×800 too. Sadly I don’t think you can justify the cost of buying one just as a monitor because the FS700 requires the Odyssey 7Q at $2295 as opposed to the much cheaper Odyssey 7 which is only $1,295. Although the 7Q can also act as a quad unit and show the outputs of 4 video sources at the same time, so could be a very economical monitor on compact multi-camera shoots with a switcher or something.

However you look at it tho, the Odyssey 7Q allows you to make 4K recordings on the FS700 without investing in camera specific equipment, although to be fair, the AXS-R5 recorder does also work on the F5 and F55 cameras which also gives you a clear upgrade path too. The Odyssey 7Q setup also looks set to be cheaper, not just in regards to the actual equipment but also with the ongoing media costs. The Sony AXSM 512GB cards retail at $1800 and the ssd media for the 7Q is expected to be much cheaper than that.

In short it’s looking like the 7Q is going to make the option of 4k on the FS700 a lot more economical than was expected and will also make for a more straightforward setup with all kinds of unexpected extras thrown in!