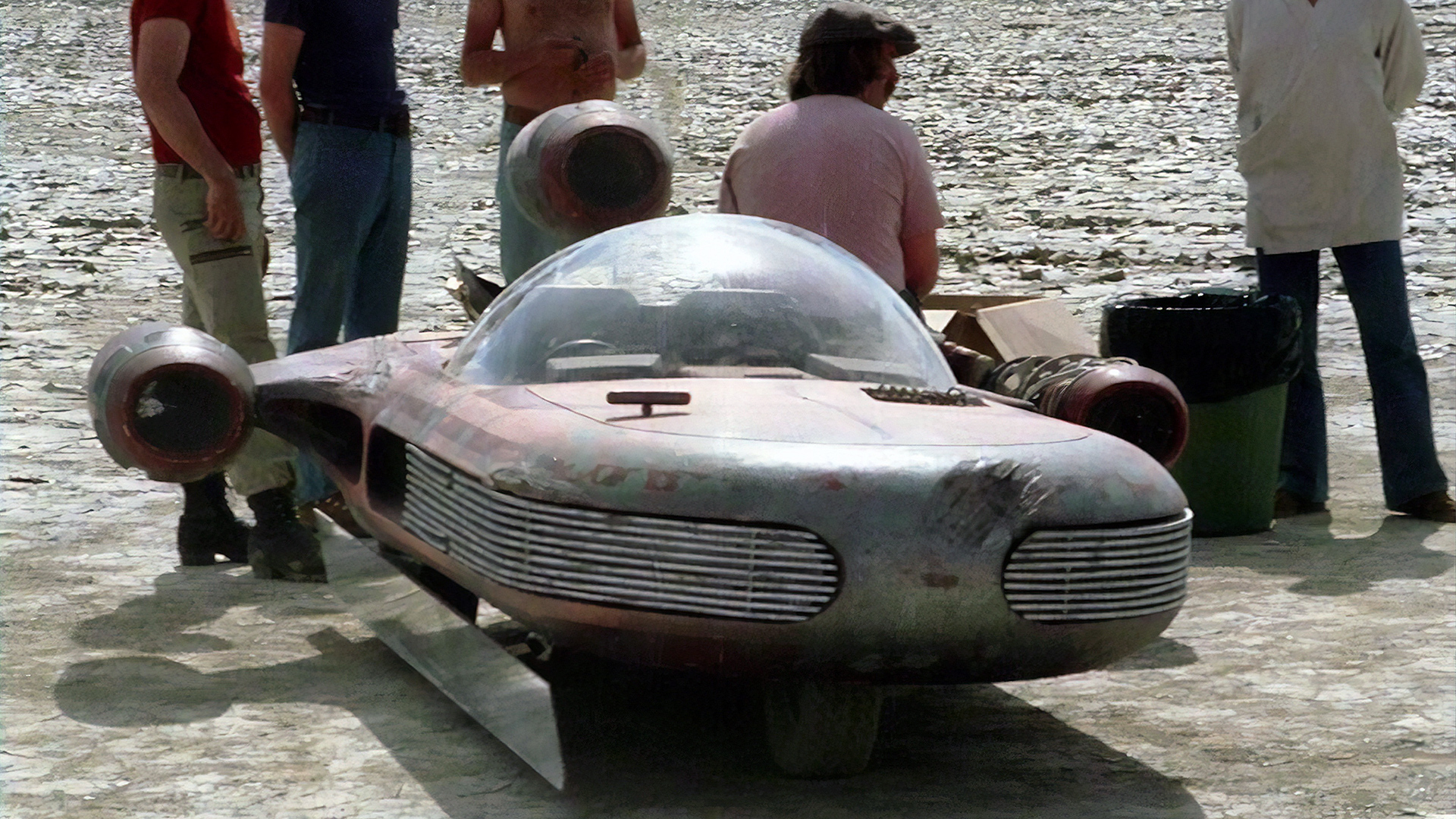 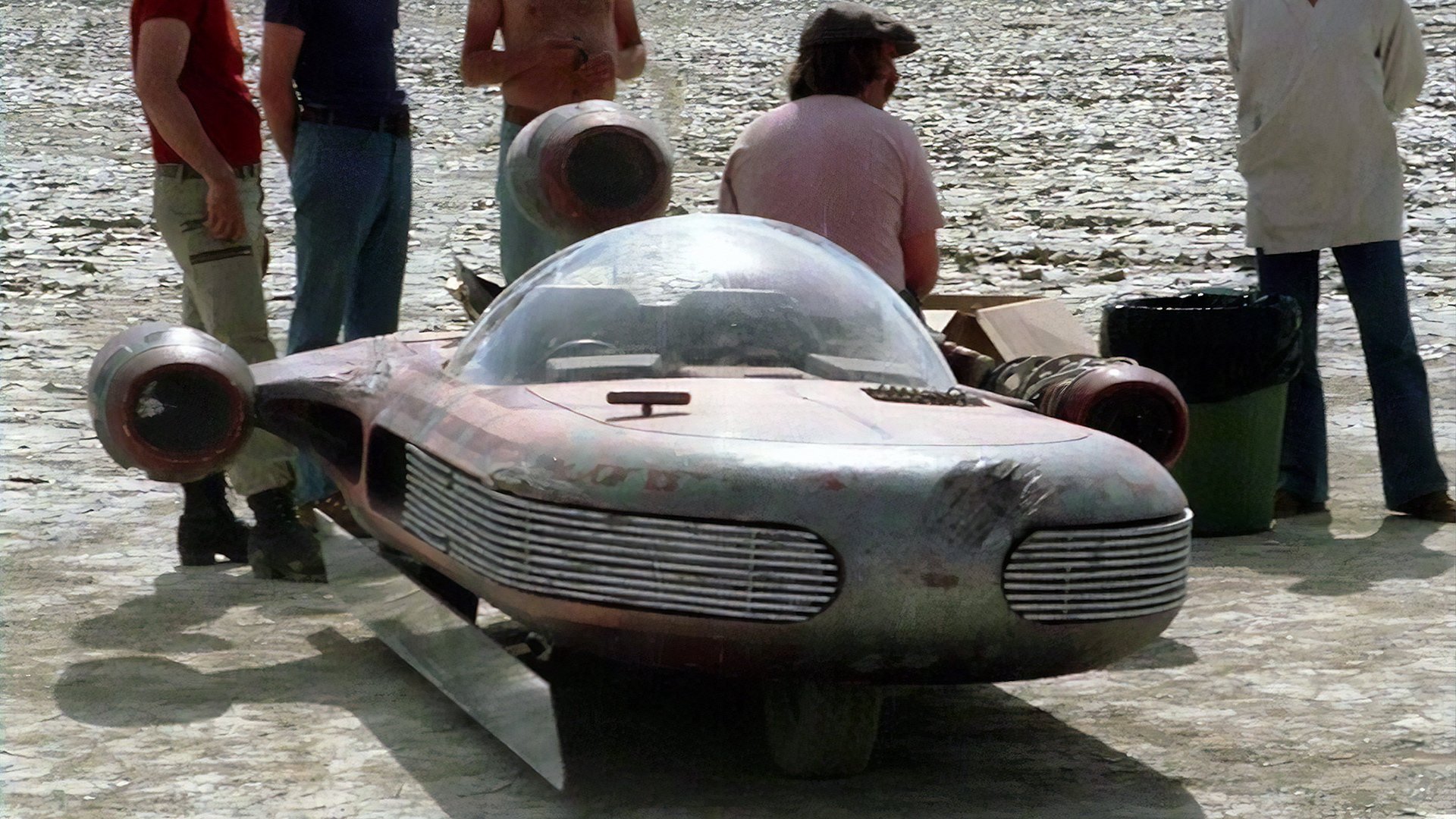 Sometimes the lowest tech methods work the best. Mirrors mounted beneath Luke Skywalker's Landspeeder achieved most of the effect of floating in-camera.

Hollywood is known for its wallet-busting excess. James Cameron, Ridley Scott, Michael Bay, George Lucas and J. J. Abrams have spent billions and billions of dollars between them, making their blockbuster movies. But all of these directors (or at least their visual effects supervisors) know that sometimes the cheapest, simplest trick is the most effective. Here’s a run-down of the top five best low-tech effects in massive movies.

George Lucas is a filmmaker who was arguably at his best when constrained by clunky technology and that was certainly the case when he made the first Star Wars film in the late seventies. The motion control work produced by the nascent ILM may have raised the bar for every movie to follow, but Lucas frequently had to turn to much simpler techniques to put the world he imagined on the screen.

To make Luke’s land-speeder appear to hover, a mirror was attached in front of the wheels, reflecting empty desert. Some optical work was required to complete the effect, but Lucas got 90% of the way there in-camera. Unfortunately, he flipped that approach completely for the prequels!

When Ridley Scott came on board Alien, his vision was to take the ‘B’ movie script and turn it into an ‘A’ picture. This was embodied by the huge Space Jockey which the Nostromo’s crew find in the alien derelict. The studio didn’t want to pay for the massive sculpture, but Scott insisted it would raise the production values of the whole film and he got his way. When it was built, however, it still wasn’t big enough for him. The solution? If you can’t make the Space Jockey bigger, make the people smaller. He drafted in his kids and the DP’s, had the costume department whip up some small-scale spacesuits, over-cranked the camera and – bingo! – the Jockey looks twice as big.

Whatever you think of Michael Bay’s films, there’s no denying that his earlier films, at least, contain some nail-biting action sequences. His 1996 Sean Connery/Nicholas Cage vehicle The Rock features a destructive car chase around the streets of San Francisco. Amongst all the money shots of falling telegraph poles, coin-spraying parking meters and exploding trams, are close-ups of the characters driving which were executed in a ludicrously low-tech manner.

Did Bay put the car on a low-loader and tow it through the streets? No. Did he put up a green screen and comp in the backgrounds? No. Did he go old-school and use rear projection à la 24? No. He simply parked the car in a place where only empty sky could be seen behind, rigged a couple of out-of-focus lights in the background on dollies, ordered a bunch of grips to rock the car and shook the camera for all he was worth.

This technique is known as Poor Man’s Process and is most commonly used for night driving scenes. But Bay knew that in a fast-paced action sequence, as long as he kept the camera moving and zooming (which he definitely does) he could get away with it. In a way, it looks better than if it had been done for real because the technique forced Bay to make the camerawork frenetic, which adds to the energy of the sequence.

Arguably the highlight of J. J. Abrams’ confident first feature, the third instalment in the Mission: Impossible franchise is the scene in which we finally get to see the whole process of making and applying one of those miraculous masks. In a single shot, we see Tom Cruise put on the mask and Ving Rhames blending the edges until Cruise looks like an utterly convincing Philip Seymour Hoffman. There are many ways to transform one actor into another with digital technology, and while such technology was undoubtedly used to smooth out the transition, the shot has a very simple trick at its heart: as the camera tracks behind Rhames’ back, the momentary darkness is used to hide a cut.

Abrams employs the same technique in his sophomore movie, the 2009 Star Trek reboot, when Scotty accidentally transports himself into a water pipe in the engine room. Released from the pipe, he falls painfully to the ground and then gets up and dusts himself off in the same shot. A foreground pillar wiping frame conceals a cut from the stuntman to Simon Pegg.

Before his Avatar performance capture days, James “King of the World” Cameron was very canny with his visual effects. His films invariably ran the gamut of techniques, from the most cutting-edge technology of the time to the oldest tricks in the book. Aliens’ climactic nuke cloud, for example, was a cotton wool sculpture with a light bulb in the middle.

But perhaps Cameron’s most remarkable low-tech effect comes in the second reel of his 1997 smash hit Titanic. The crew famously built a near-complete full-scale replica of the titular liner on the Mexican coast, while shots of the vessel at sea used a 45ft miniature surrounded by CG water populated with motion-captured passengers (then a brand new technology). But when FX geniuses Robert and Dennis Skotak needed to put the Titanic into the background of a green-screen shot of Leo DiCaprio playing poker in a dockside pub, they simply stuck a photo blow-up of the model to a piece of cardboard and dressed a train set in front of it.

Nowadays, CGI is so cheap and easy that there’s little incentive to find creative solutions like these, but I bet some of these directors are still doing it if you know where to look.