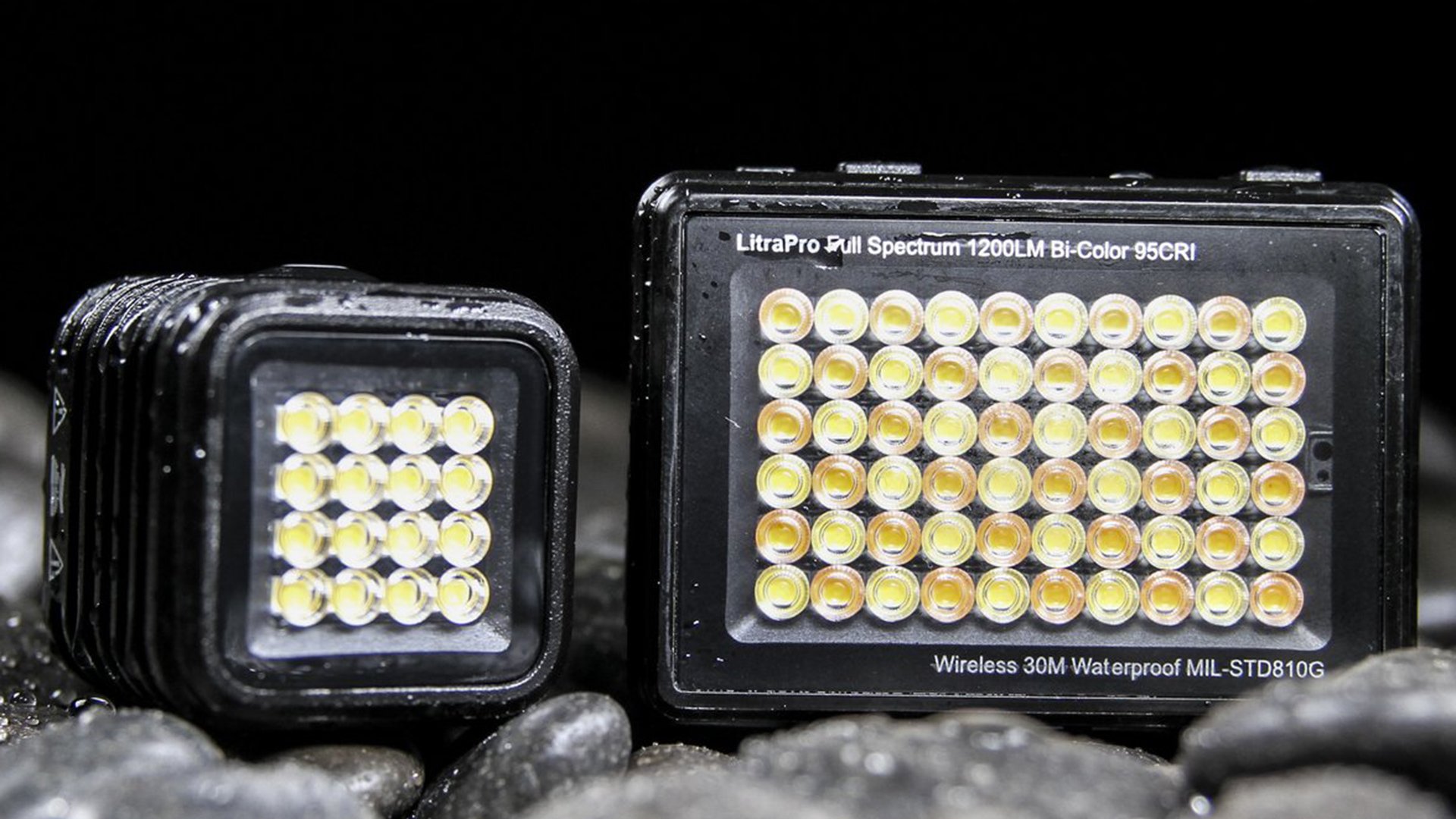 If NAB showed anything, it demonstrated that LED lights have most definitely come of age.

It’s been a while since every new LED lighting release was always big news. That’s an indication of the fact that the technology is now completely mainstream, with options to suit most applications and most budgets. Most of the world's low energy lighting now offers at least reasonable colour quality and works fine.

The pickings at NAB 2019 are particularly rich, though, and worth a bit of thought. Perhaps the technological marvel of the show is Hive’s 575-watt LED, shown as a prototype at such an early stage of development that it was apparently only assembled in the week before being exhibited. This is significant for several reasons, but particularly that it’s among the highest-power single-source LEDs of any type, let alone with colour mixing. Hive have long made the sensible decision to keep away from the well-populated soft light sector, clogged as it is with a lot of perfectly decent lights. Instead, Hive have built an impressive range of PAR-style hard lights which all offer full colour mixing, and seem dedicated to pushing power levels up in exactly the way the market needs. And yes, we’re told it’ll be cheaper than an equivalent - and much less flexible - HMI. 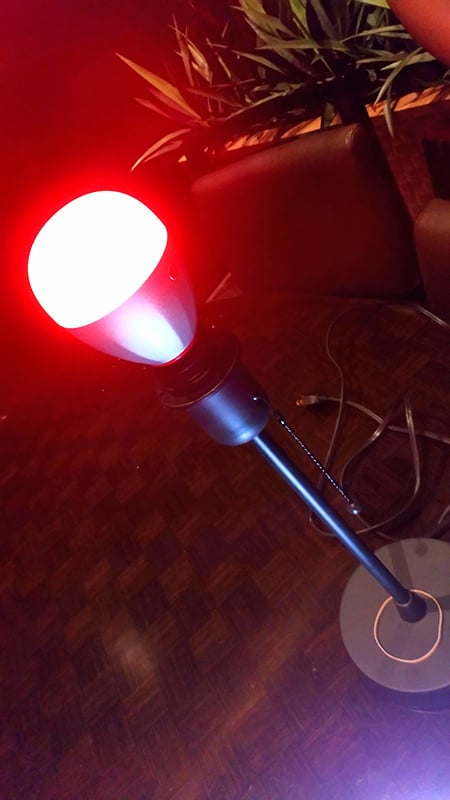 At the other end of the wattage scale, Litra launched the LitraTorch 2.0, barely more than an inch cubed and with an array of sixteen little LEDs on the front. This sort of thing has been done before, but it’s a useful indication of the state of the technology that a simple bank of white LEDs - albeit carefully-chosen white LEDs - can achieve such good colour rendering. A rather unscientific test with the UPRTek CV600, on the trade show floor, revealed a perfectly adequate TLCI in the mid-90s. Perhaps the days of basic LEDs struggling for colour quality really are over. There's an optional filter kit that will attract DPs on sci-fi movies who want to fill their horizontal anamorphic lens flares with a bit of colour - the greenish cyan is particularly Ridley Scott. Litra refer to the LitraTorch as “adventure lighting,” possibly with the idea that it’ll be strapped to someone’s helmet during a trip down the whitewater rapids at night, but it has applications way beyond that. 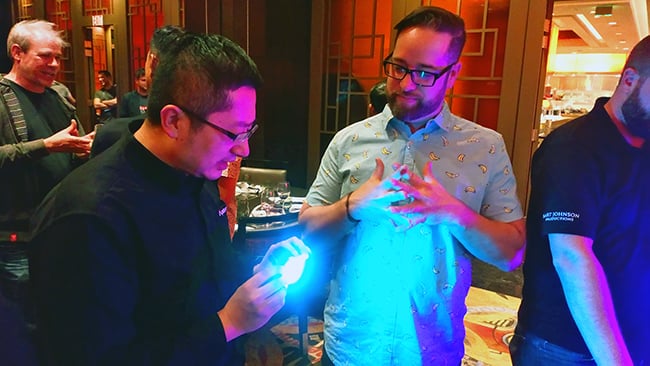 Best-in-show awards always end up feeling rather politica, but if there’s an award for sheer quantity of engineering work done it must go to Aputure. The company has been teasing its full colour mixing panel light for some time, and to be fair it’s still teasing the light, but there’s now a price - $1600, or thereabouts, for a 300-watt colour mixer that’s significantly smaller and lighter than some of the best-known competition. The assumption might be that it would be rather lightly-made to achieve that, but it's fine: it's built around a metal back panel with chunky plastic ends, again, like some of the most prominent options around. It will inevitably be compared to those options, but it's worth being clear that some of the best known LED panels have a reputation which may sometimes exceeds their performance and it won't be hard for Aputure to do well in that comparison when we can get one under controlled conditions. 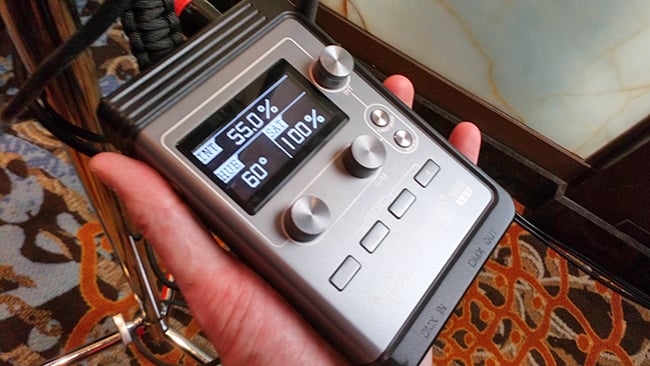 Aputure’s panel light is part of what’s being called an ecosystem, and for once that term seems well-applied. At the same NAB event, the company announced a lightbulb-styled device of similar design to many replacement bulbs for domestic use, but which produces a colour-accurate and flicker-free output with, again, full colour mixing. Springing from the same technology, the AL-MC is another colour mixing light in much the same vein as the AL-M9 that we reviewed some time ago, but which offers wireless charging, and can be purchased in lots of twelve in a case fitted with twelve bays into which the magnetic AL-MC lights neatly snap, for wireless charging. 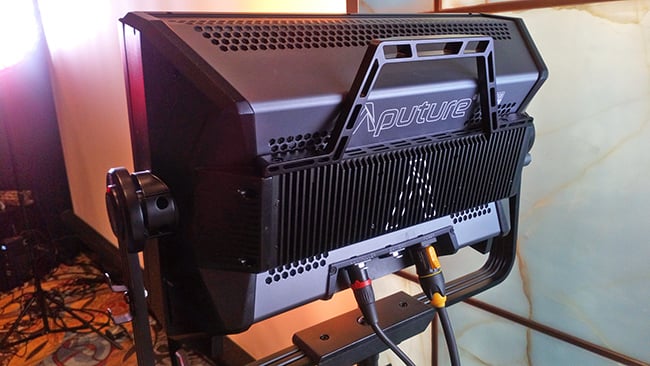 All of these lights are controllable from a phone via the improved Bluetooth variant Sigmesh. This allows all of the lights in a group to act as mesh network nodes, ensuring that messages will be passed on from the controller whenever there’s a workable signal path through the mesh to the target device. The controller can use the phone's software to snap photos of things and sample their colours for application to a colour mixing light.

This is all fine. Aputure have long made a business out of selling products which have a price-performance ratio that works for a lot of people, in which vein they’ve also announced improved versions of the COB open-faced lights. What earns the company this mention, however, is that it has also announced a bridge between its Sigmesh network implementation, supported by current and presumably future lights, and the older, simpler radio remote technology supported by its legacy products. This means that an original COB-120 light, or even the older flat panel white lights, can execute the same stroboscopic and flicker effects as the modern equivalents. This sort of refusal to forget past customers is exactly the sort of thing that ensures a company's popularity, and it’ll be a pleasure to look more closely at some of Aputure’s new lighting options as and when they become available for review.