Incredible HDR footage from the EOS R - here's how it was done. 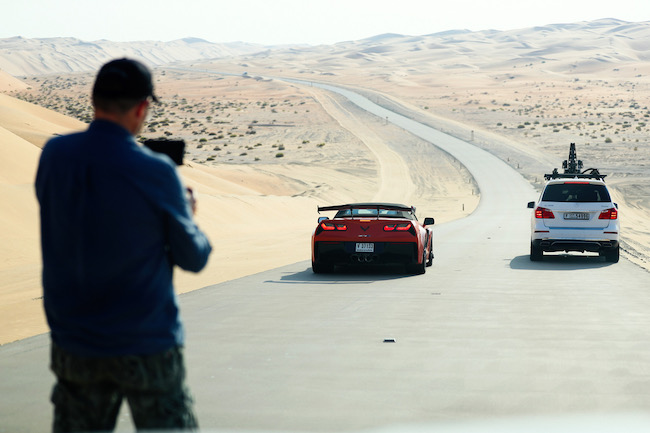 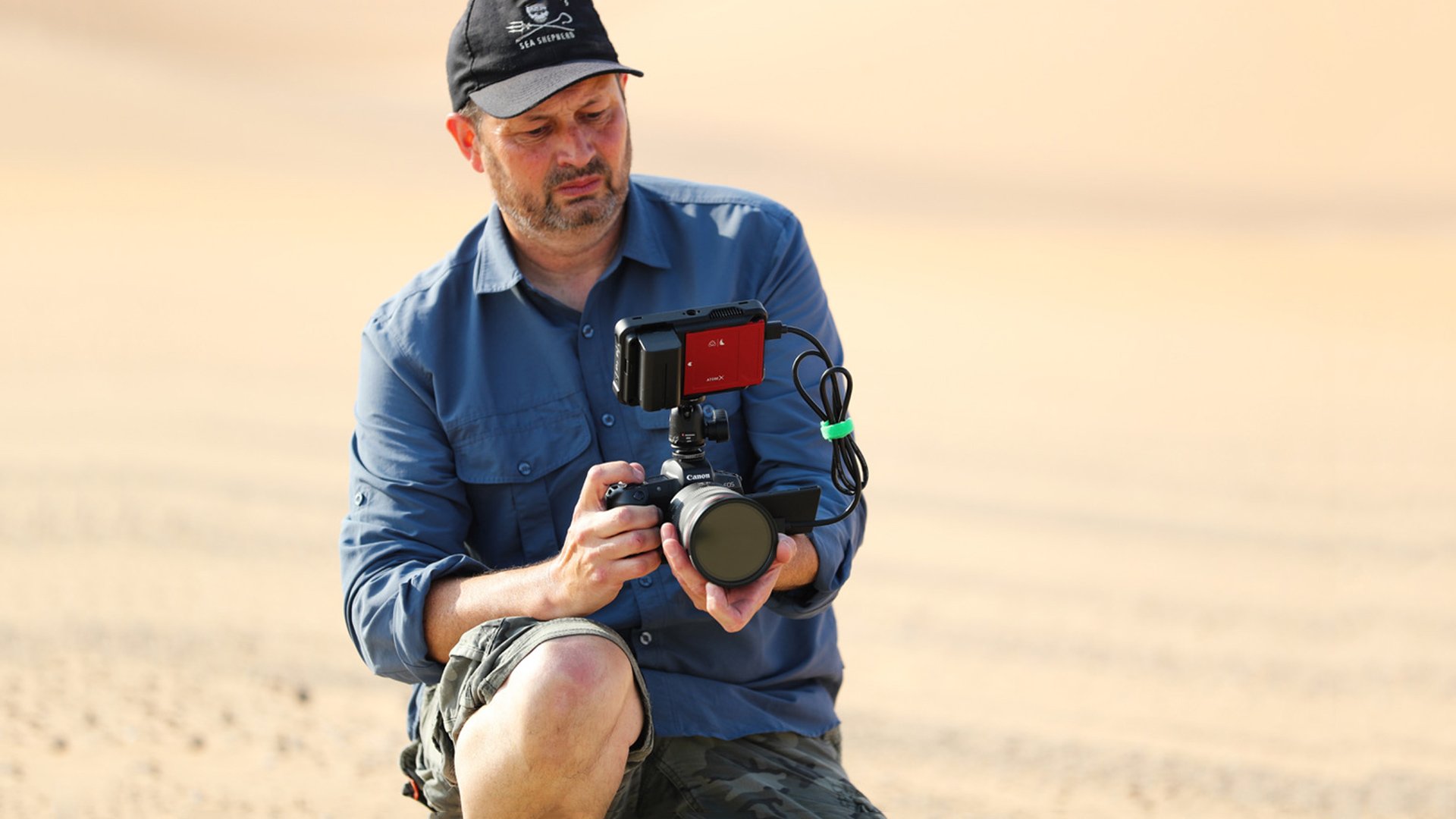 One Canon EOS R and one very hot desert. A recipe for disaster, or proof of the camera's capabilities? Brett Danton tells us what it's like to literally hot foot it around making a BTS segment using just an EOS R and an Atomos Ninja V.

On our recent Chevy shoot in Abu Dhabi, in the middle of the desert, we decided to give the EOS-R a chance to shoot the BTS (Behind The Scenes) and finish in HDR. The main shoot was on the C700FF - Canon’s Full Frame cinema camera. We were faced with temperatures of over 45 degrees and the EOS-R that had only just been released before it was put into the hands of photographer Mike Hogan just hours before call time on the first location. Mike said “it’s not a recommended way to start shooting” - but even with jet lag and feeling shattered he quickly felt at home with the camera.

The camera was teamed with an Atomos Ninja V recording in 10-bit Pro Res 422 HQ using Canon Log, it made for an extremely compact unit mounted on the hot shoe and Mike shot everything completely hand held, from out the sunroof tracking to running after drones. 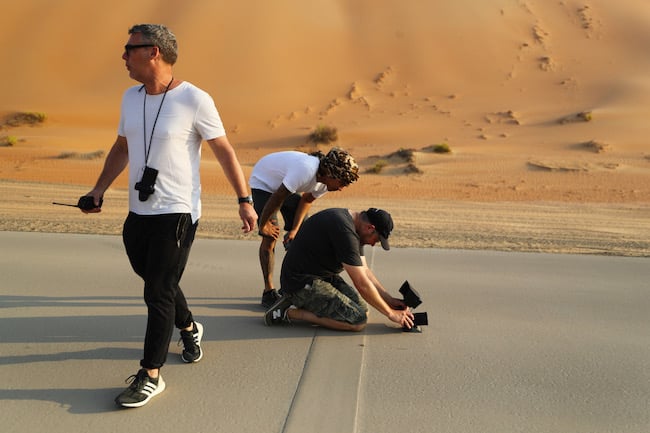 Mike said about shooting with the R:

"The nature of behind-the-scenes is that every moment of every day can be relevant. You’re on the move, following the action across scorching hot sand, jumping in and out of support vehicles. The R was just ideal:, small, light and it performed smoothly without the unwanted and frankly unusable baggage of a tripod or monopod.

"I simply couldn't operate with a clutter of kit. The crane car & other support vehicles were rammed with gear & crew, and the desert was extremely hard going under foot, so I found myself relying on a simple, pared down kit of one camera and the remarkably compact  24-105 lens” 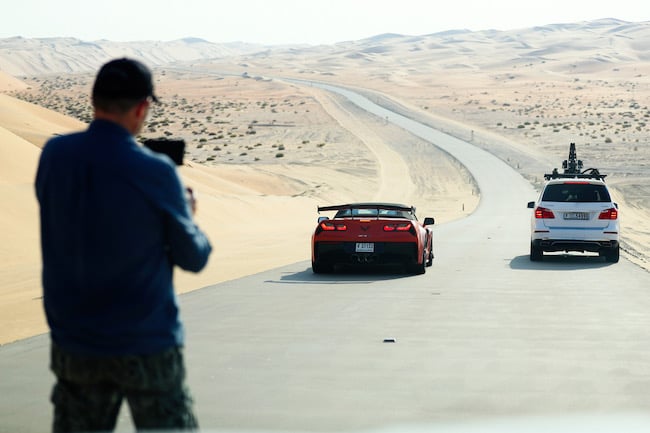 "I'd never used Dual Pixel AF before or a touch screen interface but I found them very good. The fully articulating touchscreen was perfect for this roving style in the biting sun and the camera’s AF locked on when I really needed it. The system followed the drone and other similarly unpredictable subjects in unwavering fashion, through foreground clutter & even against extreme back lighting.

“The stabilized lenses were truly impressive, I was hanging out of the window of a support vehicle, losing my hat as we attempted to follow the Chevrolet & Crane Car thinking "well this footage ain't going to survive the edit”. But what was ultimately delivered was incredibly smooth and had the look of a much higher frame rate” 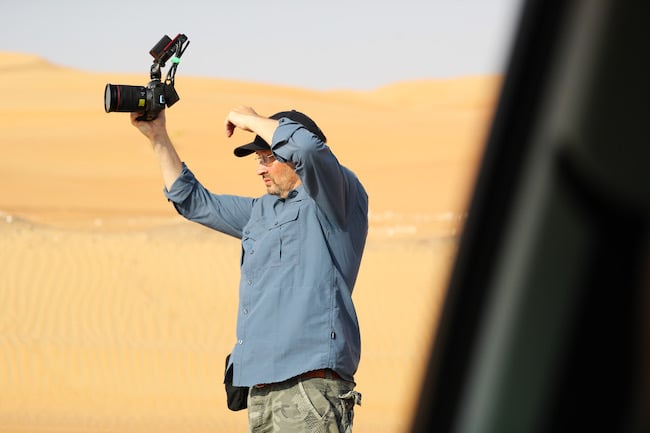 The edit was done in Premiere CC2019 and with Mike’s shots, I had plenty to work with. We put a REC709 LUT on the log files so that we and the client could view the footage prior to HDR grading by Ollie Kenchington from Korro Films.

The edit was moved from Premiere to Resolve 15 via XML. We did some extra stabilisation in Resolve on the tracking shots taken through the sunroof, but most of the time the lens stabilisation was enough.

Ollie had some shots that were also shot on the C200in Cinema RAW Light to balance with the EOS R footage.  He wasn’t sure how the HDR would translate between the C200 and the EOS R, but this is what he had to say once the process started.

"Working with the source files Brett sent me, it quickly became apparent that the Pro Res files from the Ninja V had a surprising amount of latitude in them, and I was able to easily push the specular highlights on the car (from the intense desert sun that every scene was bathed in) up to the 1000 nits we were mastering to, using Canonʼs DP-V2420 reference monitor. Iʼm constantly surprised by what I can pull out of the compressed files in Canonʼs EOS range. I’ve found this with the XF-AVC files from the C700/C300, and the MP4 based files from the C200/EOS R. It’s almost as if some secret sauce they use that means you can push them much further than other compressed formats, though logic tells me this shouldnʼt be the case." 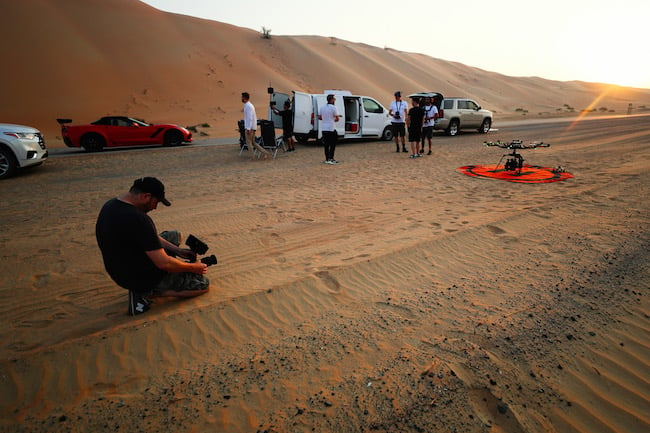 What was great about the process was the ease of finishing in HDR in 4K from a small camera package through to post. The final results, shot in extreme conditions and hand-held with the colour depth speaking for itself - especially if you compare with the SDR version. On this shoot with a small crew, remote locations, this would have been extremely hard with other camera packages. What’s great is that this puts an HDR finish in the hands of most film makers.

BTS for viewing on an HDR device such as iPhone X and up or iPad Pro.