These cameras were full of promise. What happened to them? 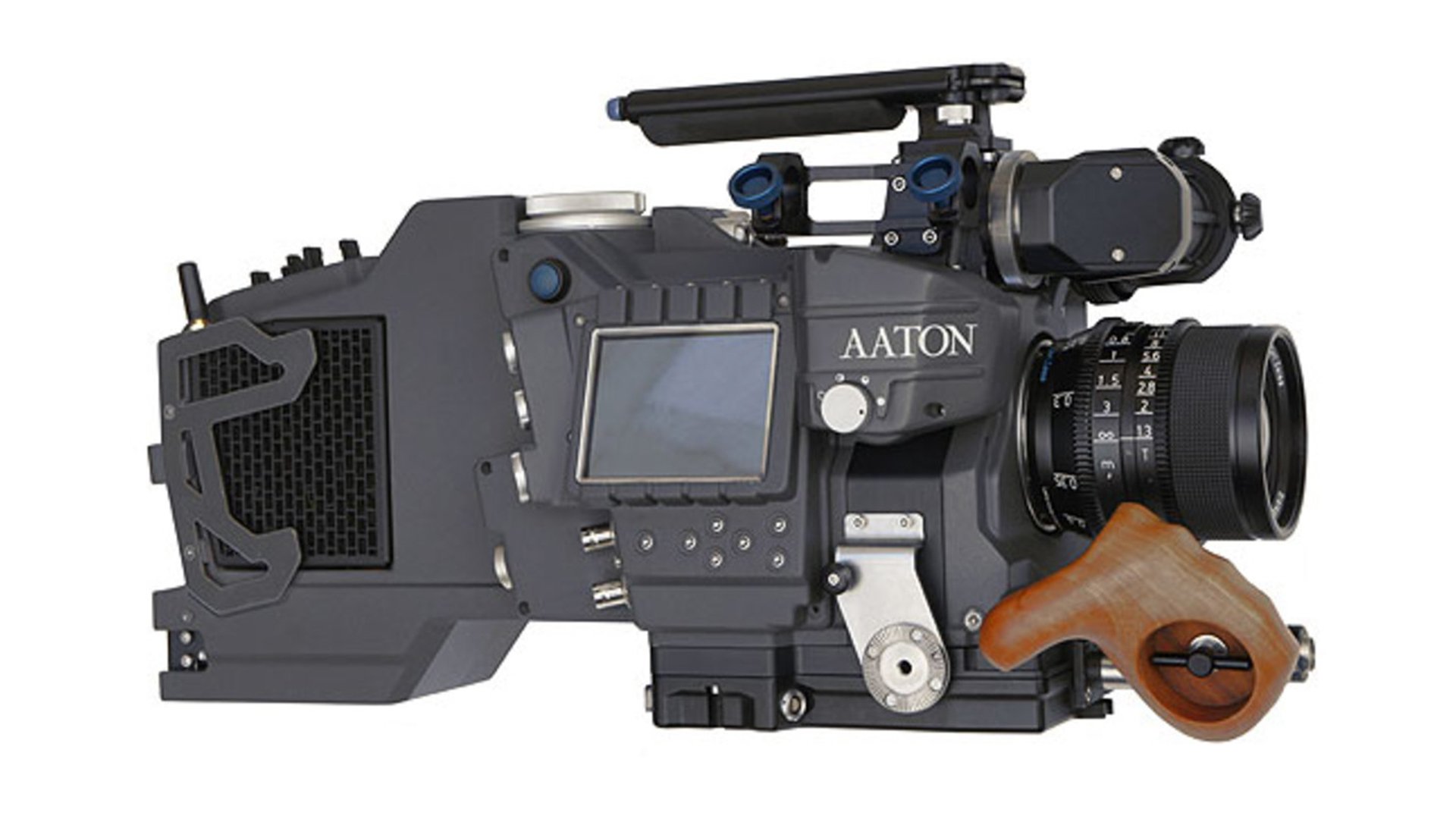 Replay: When you push the boundaries of technological progress it stands to reason that more than a few ideas will fail to catch on. Camera history is full of examples of devices that for whatever reason faded into obscurity. In the first of a multi-part series, and with NAB just around the corner, Phil Rhodes takes a look at cameras and technology that were full of promise, but just didn't catch on.

Even the most capable and experienced companies occasionally launch products that, for any of a lot of reasons, aren't widely discussed a few years later. It'd be easy to think that this is a relatively recent development in the world of cameras, which have become a lot easier to build thanks to programmable logic and the concept of modelling something in a CAD program and sending it off for manufacturing. That's a cruel oversimplification, but it has become less expensive and less time consuming to do these things.

That's generated mixed results, but really, the idea of trying something that doesn't quite work out is not a new one. Let's start with:

There have only ever been two widely-deployed systems for recording moving pictures: photochemical film and electronic television. Mechanical TV was a whole path not followed, but it was seriously pursued for years. Paul Julius Gottlieb had patented the Nipkow disk in 1884, but it wasn't until the invention of the invention of vacuum tube technology in the early 1900s that it became possible to use Gottlieb's ideas to create a system for mechanically encoding moving pictures for radio transmission.

While it never became mainstream, the rotating disk is a good way to understand how all television works. Drill a hole in the edge of a disk, and when that disk rotates the hole will trace a circular path. Cut a square window in a plate and put that behind the disk, and the hole will sweep repeatedly across the window, scanning one line. Drill some more holes in the rotating disk, moving closer to the centre with each hole, and those holes will sweep lines across the square window, in sequence.

The mechanical colour televisor. The test card is just visible in lens on the right hand side. Photo - Wikipedia

It's not a great solution. For more lines of resolution, we must make more holes in the disk. The more holes, the smaller the gap between them, and the smaller the image gets. Make the disk bigger and the mechanics become incredibly cumbersome. Early demonstrations by John Logie Baird produced monochromatic 30-line pictures at five frames per second; the use of a neon light source meant dim black and orange images. Mechanical TV is also horribly insensitive to light, since each point on the display is only exposed for the fraction of a frame that the hole in the disk is passing it. Modern cameras record light for the entire shutter period of the camera.

It worked – Baird even demonstrated colour – but Philo Farnsworth's experiments, while also insensitive, quickly showed more potential, especially after input from the Hungarian physicist Kálmán Tihanyi. It's from their work that modern cameras derive.

Cinerama is one example of a range of wonderful, impractical mid-century attempts to fight off the perceived threat of home television. Some of those attempts, including 70mm either horizontally or vertically, and various systems involving anamorphic lenses, became at least somewhat established; 2:1 anamorphics are popular to this day. We could have talked about Vistavision here, a system which used 35mm film horizontally with an 8-perf frame roughly the same size as a still photography frame. We could also have talked about Showscan, a system that emerged perhaps thirty years later but with a fairly similar goal: improve upon conventional, four-perf 35mm. 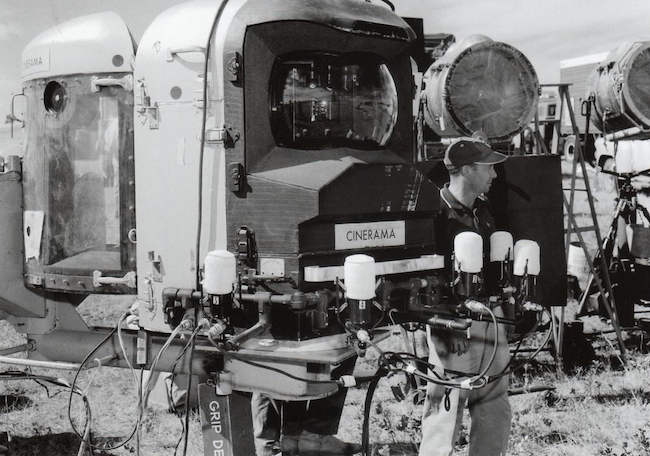 Cinerama, though, was by far the most deliciously impractical. The first version used a special three-lens camera with a single shutter, which was designed to produce three separate 35mm negatives which would be printed then exhibited in an auditorium with three widely-spaced projectors illuminating a huge curved screen. It was spectacular, but it was massively complicated: the joins were visible, and the geometry was such that actors had to look at predefined marks in order to appear to be looking at one another. Complex technical measures were added to make the joints less visible, but it could never be perfect, and it was massively difficult and expensive.

Most Cinerama venues had switched to 70mm by the mid-60s. Four venues still exist which are capable of exhibiting true three-print Cinerama, including the Cinerama Dome in Hollywood, the Seattle Cinerama, the New Neon Cinema in Dayton, and the Pictureville Cinema in Bradford, in the UK. It survives as a curio of a time obsessed with excess, but it's hard to object to anything from which 70mm is a step down.

With mechanical TV consigned to history, electronic and photochemical moving image systems coexisted peacefully for most of the latter half of the twentieth century. By the 1980s, though, it was becoming clear that electronic systems could or soon would present a realistic alternative. Panavision were probably a bit too eager with their Panacam system, which was promoted in a 1982 brochure as “a video camera designed for the Cinematographer [sic].” 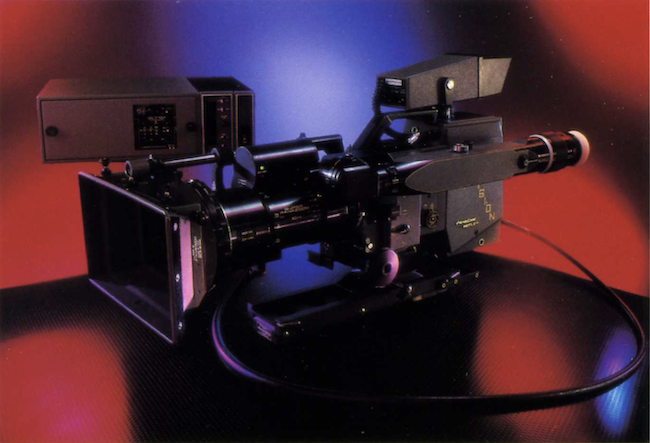 To be fair to Panavision, it was a much more comprehensive repackaging than some of their later efforts. While the Sony HDW-F900 was brought into the Panavision ecosystem more or less by changing the lens mount and viewfinder and uploading some custom gamma curves, the Panacam had an optical relay system designed to allow Panavision's film-style lenses to be used, increasing effective light transmission of a T/4 lens to T/1.7. That's something the F900 mod lacked; it was compatible with Panavision's Primo Digital series, probably because CCDs are smaller than tubes. The Panacam also had a reflex viewfinder.

Interlaced tube-camera images probably didn't look much like film even to lay 80s eyes. All the same, Panacam wasn't an immediate failure and the idea was followed up. The January 1984 issue of American Cinematographer discussed the subsequent Panacam II, sometimes styled Panacam ][ in a way that clearly isn't a reference to Apple's slightly-successful computer of the time, but it's hard to find too many references thereafter. Sitcoms like Friends were regularly shot with 35mm film cameras on studio pedestals in the 1990s, at a time when it was completely technologically possible to create an electronic camera that could, at least under studio lighting conditions, challenge film. It's just that nobody had, and things didn't really move in that direction until 1999 and the Sony collaboration.

The HDC-100 camera appears here as something of a placeholder for many early analogue HDTV systems. There were many attempts and few successes. The HDC-100, with its attendant HDV-1000 recorder and HDT-1000 processor units, produced 1125-line interlaced-scan images in 5:3 aspect ratio. The popularity of 1125-line, 5:3 video in 2019 tells us most of what we need to know about how that panned out, although it was among the first HD systems to be used to shoot material for cinematic release. Significantly, the 1125-line equipment was referred to as HDVS, for High Definition Video System, a phrase that continued to appear on Sony HD equipment as recently as the HDW-F900. 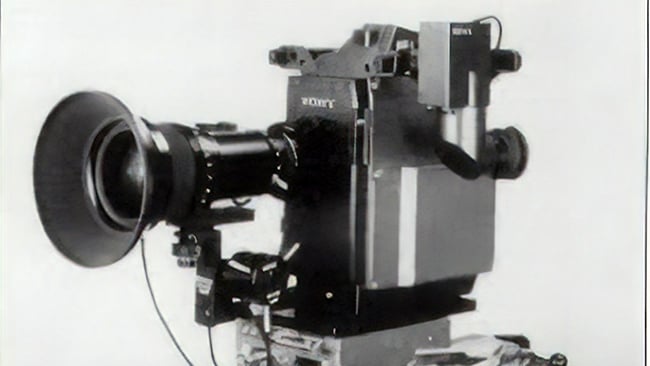 The Sony HDC-300, a second generation analogue high definition camera from the mid-80's

Through the 80s and early 90s there were many tries at producing HD video production and distribution systems. The Sony HDC-500 was the first ever non-tube-based CCD HD camera. These systems were not failures: they were implemented and used for regular broadcast, chiefly in Japan, and it seems that most of them were scuppered not particularly because of problems with production, but with distribution; it was not viewed as practical to increase the amount of radio bandwidth consumed by TV channel just to achieve higher definition.

The European HD-MAC system and the Japanese MUSE were different approaches to solving that problem, effectively implementing analogue compression. Both worked, but were abandoned essentially because it had become obvious that digital encoding worked better, although MUSE was broadcast in Japan until 2007. Analogue HD was, overall, a road not taken, or at least not taken very far, and the HDC-100 camera stands as an example of it.

Sony, of course, weathered the storm.