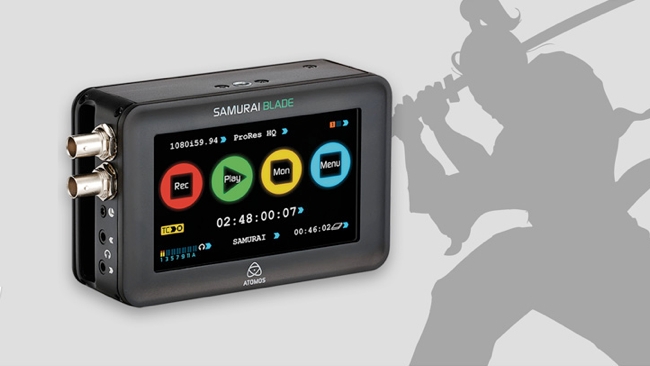 The popular field recorder was originally launched with a resistive touchscreen and mini-BNC connectors for SDI input and output, necessitating the use of adaptor cables. While the cables themselves were not particularly problematic, replacing them was as there was no "standard" for them.

The original screen looked good but was criticised for its lack of brightness and because it required pressure on the screen to make it respond to touch (arguably a good thing if the user wears gloves!).

The new screen is a 1280 x 720 SuperAtom IPS screen - the same as used in the top current HTC phones.

We've seen the new screen and it does represent a significant improvement (through the walls of a glass case at NAB, unfortunately).

Although there's no sign of a 4K offering from Atomos, they are clearly consolidating their products, bringing in asked-for features as they continue to aim at the still very large HD SDI market.

For clarity, we've included Atomos' press release in full below.

“Atomos has now shipped a staggering 10,000 field recorders worldwide, and the Samurai has been a great success. For most professional environments it continues to be the go-to recorder or deck for many of our customers,” said Jeromy Young, CEO and Founder of Atomos.“ We are now excited to present the next generation of Samurai – the Samurai Blade.

“Blade introduces the SuperAtom IPS screen – super sharp, super bright, super blacks – right down to the last atom. At 325 dpi and a million pixels, this screen is spectacular. With full waveform functionality, the Blade is a monitor that records and a recorder that truly monitors. It’s the perfect partner for the new wave of cinematic cameras.” added Young.
Powered by AtomOS 5*, this stunning 1280 x 720 5” touchscreen gives the Blade gamma, brightness and contrast control, as well as vectorscope and RGB/luma parade features.

“Atomos is raising the bar in the affordable field recorder segment,” added Young. “We’re the first to combine professional monitor functionality with recording and deck playout, all in a space-saving, camera-mountable portable unit.”

With immediate effect, the price of the Samurai is reduced to $995, excluding sales tax. *AtomOS 5 is only available for the Samurai Blade.