Using a Sony A7S for a feature: What it really takes to get your Indie film into a cinema 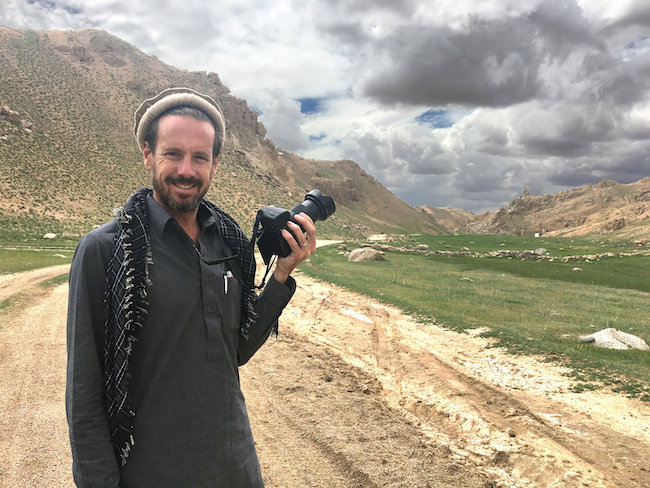 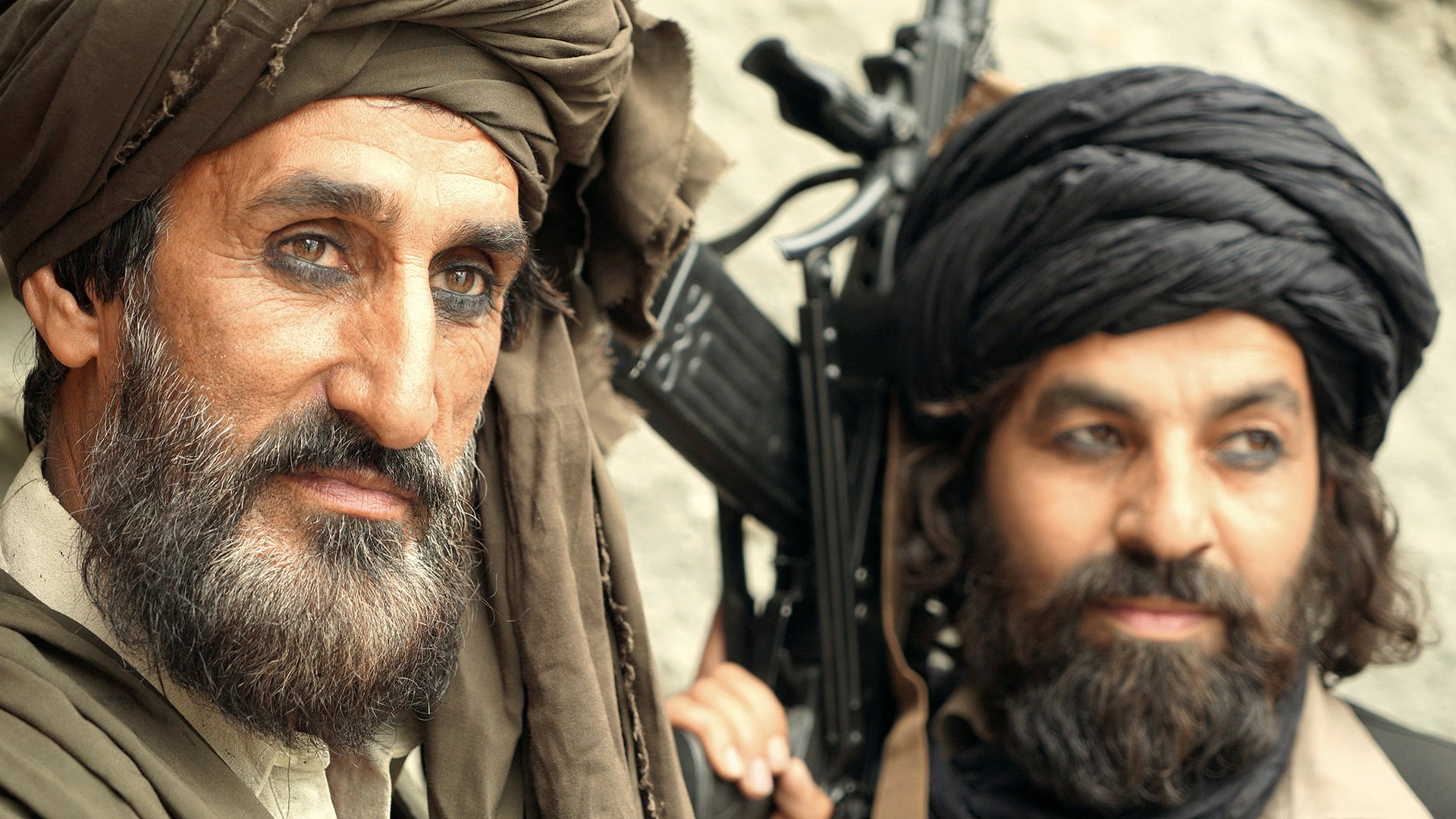 Benjamin Gilmore is a Sydney based Paramedic who makes feature films in his spare time. After some moderate success on the Festival Circuit with his past attempts, Ben thought it might be a good idea to head off to somewhere exotic and exciting. Such as Afghanistan. There he planned to shoot a scripted drama about an American soldier who is troubled by guilt over something that went horribly wrong during his deployment.

Soon after his filmJIRGA was released in the Cinema circuit in late 2018, I spoke with Benjamin about why he chose to shoot it entirely on a mirrorless camera and what, if any problems he might have experienced bringing files from what is actually a Stills camera with acclaimed low light Video capability into the traditional post production workflow of a Cinema release Feature Films.

After meeting Sydney based actorSam Smith, Benjamin became fascinated by an extraordinary story of post-traumatic stress in return war veterans and this set the seed for his screenplay based around the notion that a former American soldier, Mike Wheeler would return to Afghanistan and seek redemption from the family of a civilian man he killed during the war.  After some development funding, Ben’s original plan was to shoot his film along the Pakistan border, a region which looked very similar and with the same ethnicity to Taliban strongholds in Afghanistan. With funds for the location shoot pledged by some foreign businessmen, Ben and actor Sam Smith set off from Australia to scout for locations.

Ben knew that immediately funds were cleared, his professional film crew on standby back in Australia would fly out and join them there for a location shoot of several weeks duration.  However, when they arrived in Islamabad, Pakistan, Ben received the devastating news that his script was deemed far too politically sensitive and that a formal ‘Permit to Shoot’ in tribal areas would not be issued.

This effectively meant Ben’s local funding would not be forthcoming, the crew would not leave home, his Australian post production bookings were in jeopardy and to make matters worse, the local Pakistani Secret Service were suggesting that an immediate return to Australia might be a wise decision. Ben had already paid his key actor, Sam Smith in advance and they were already there, close to where they wanted to shoot so it seemed silly to waste the opportunity. Could Ben and Sam really do this without support and backup?

Ben still had a small amount of money remaining from a Crowd Funding campaign, some funds left in his Screen Australia Script Development account plus of course, that much hammered source of Aussie filmmaker funding, his Credit Card! Ben and Sam decided to wing it so walked into a local Bazar hoping to buy a camera, then go in ‘under cover’ and shoot the film themselves.

There was nothing available so after some careful research and several frustrating phone calls later, Ben discovered there was only one suitable camera in the whole of Pakistan. It was a Sony A7S Mk IIbut it was miles away down on the coast in Karachi so as they were still in Islamabad, being firmly encouraged to ‘return to Australia forthwith’ by the Authorities, there was a tense wait whilst the camera body plus a hastily acquired, after-market 24mm-70mm zoom was shipped to them from the Sony dealer in Karachi. 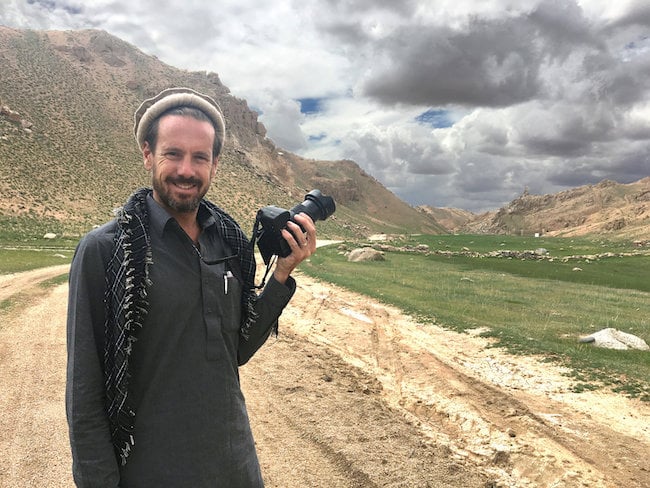 By this stage, Ben had phone numbers of people who might help them once on the ground in Afghanistan so immediately their camera arrived, Ben and Sam flew out from Islamabad. Not back to Australia which would have been the sensible decision for fathers of young children but instead into the wilds of Afghanistan. Armed with a somewhat less complex script, a laptop, some SD cards, a largely untested A7S and a battered copy of ‘The Guerrilla Film Makers Handbook’, the boys arrived dressed for the desert.

Ben says in hindsight that book gave some very good advice as he did remember to capture plenty of still images during the shoot, several of which are featured here and were captured directly off the Sony’s 4K video file. In fact, Ben says this project turned out to be classic Guerrilla film making as he was prepared to break all the rules of professional scripted drama to get this tough project in the bag. Zooming in the Take became the norm but what about Auto Focus? Yes well, the less said about that, the better. Even though the zoom was not a Sony, it did feature some form of Auto Focus but Ben suggests ‘Auto Hunting’ might be a more appropriate term especially as the entire feature was lit only by available light, so when cave walls for example, were brighter than the faces of the actors, guess where the lens chose to focus?

After all the trials and tribulations of typical ‘run & gun’ (almost literally) locating shooting in a potentially dangerous country (Australian forces are still deployed in Afghanistan) along with his occasionally disastrous attempts at ‘data wrangling’ after a hard, hot day’s shoot, Ben eventually returned to Australia where he played his trump card. Now Ben is the first to admit he is not a skilled Cinematographer: "I put the camera on Auto and I point it in the general direction of the action”. He quipped, “I avoided Auto Focus where possible but to be fair, the quality of the Sharpening available in Post Production today is truly remarkable…” Ben admitted that the pictures he captured in Afghanistan along with the performances he inspired from Sam and his ragtag team of local ‘gunslinger’ actors were enough to win him a substantial Post Production Grant in the order of some several million dollars from Screen Australia.

Ben fortunately secured the services of veteran Australian Screen Producer,John Maynard along with skilled editor,Nikki Stevens who Ben says worked beyond her remit to carefully massage his clunky, compressed 4K pictures and dubious sound quality from a poor man’s Sow’s Ear into a rich man’s Silk Purse. The decision was made early to down-sample the Sony’s native 4K files to 2K, a standard for potential Cinema release and distribution so once edited, Nikki’s XML was handed off to experienced Colourist,Jamie Hediger who Ben readily concedes, given the huge amount of fine red dust they discovered inside the camera and all over the sensor, was worth his entire weight in the bright shiny stuff! 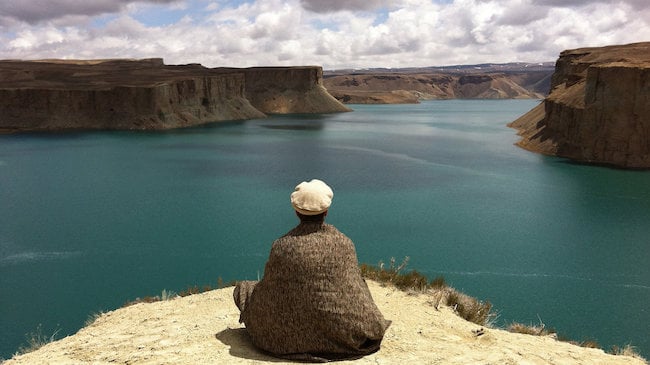 In fact, a large proportion of JIRGA’s VFX budget was allocated to remove the influence of that fine dust which, even though the lens was never removed from the camera body, had successfully deposited itself right across the sensor. Ben confided that he was fortunate to have selected the A7S Mk IIs ‘PP7’ or Picture Profile #7 setting, one of Sony’s S-Log options because in Afghanistan, the Taliban Own the Night. You need to be Safe by late afternoon so everything he shot was in the brightest of sunlight without any lights or even reflectors, yet he was extremely impressed by the camera’s dynamic range and shadow detail.

In hindsight, Ben admits that he was stunned that this relatively low-cost camera, even in the hands of a ‘rank amateur’ such as himself, could produce such spectacular pictures up on the big screen. It was testament indeed to the camera and his post production team. Since the film’s Cinema release in late 2018, JIRGA has opened to widespread critical acclaim, especially for its stunning cinematography! Ben sheepishly admits this might be more to do with the performance of the camera and the skill of his post production team than any merit in his personal department though, his experience as a well-travelled, landscape photographer held him in good stead.

Even the location dialogue recordings were captured entirely on the A7S’ internal microphone which Ben concedes was better than it deserved to be. As might be expected, this created the need for some extensive Foley and ADR work for his Post team back in Australia. Given Sam Smith spoke his entire location dialogue with an American accent because Ben’s original screenplay was about an American serviceman, it was decided back in Australia by his Producer, after all the location work was completed, that former soldier Mike Wheeler should be an Aussie!

Consequently, every piece of Sam Smith’s dialogue was recorded again in the studio and much of the local Afghan dialogue needed replacing too but there was simply no money to fly back to Afghanistan and re-record so with some lateral thinking, Ben used basic Smart Phone technology to send a text message to his Afghan actors out in the desert who simply recorded their new dialogue as a Voice Message. This was emailed to Ben in Australia who immediately relayed it on to his Editor for insertion into the film!

JIRGA is in limited Cinema release around Australia 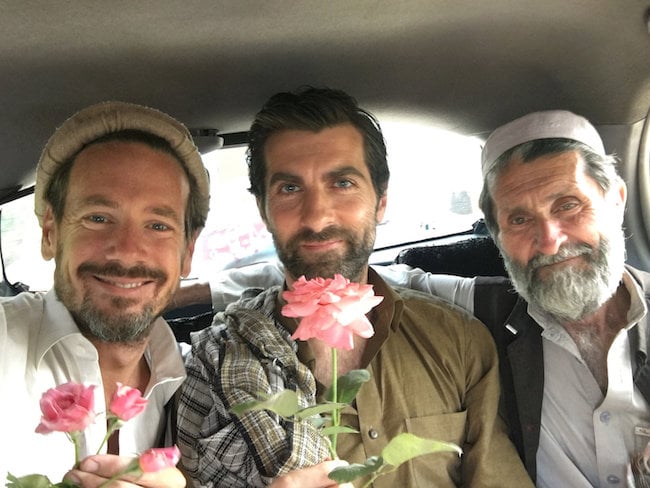 Ben, Sam and one of JIRGA’s local ‘fixers’ showing that not everything in Afghanistan looks Khaki! 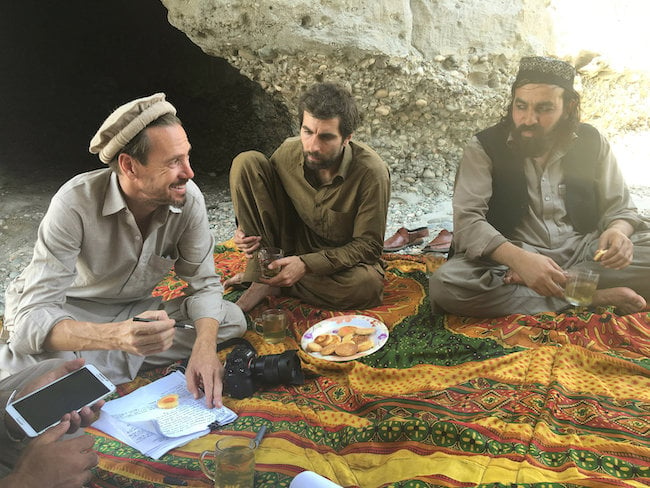 Ben and Sam massage JIRGA’s script on location in Afghanistan 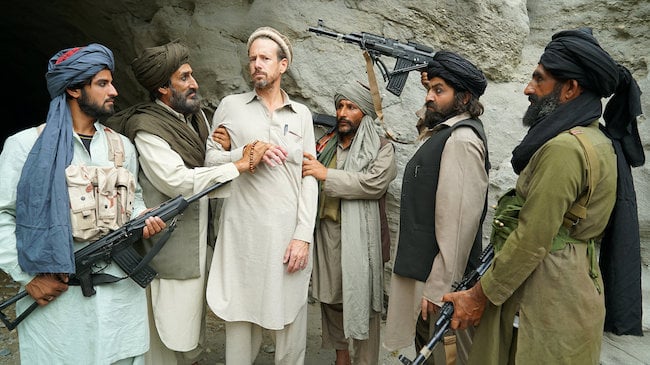 Who need enemies when you have friends like these! 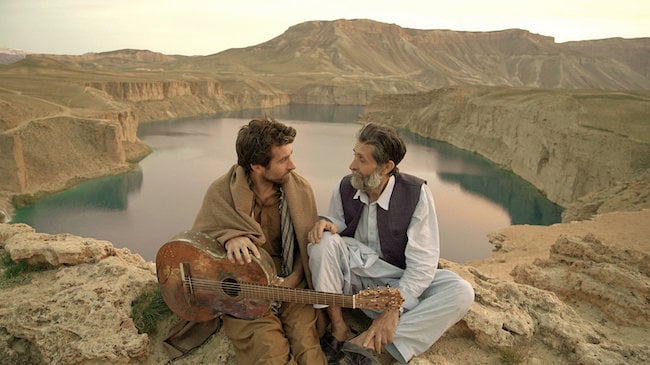