Could you shoot a movie using one lens? Here are some wonderful examples

One of the most discreet, yet most aesthetically influential codes of cinema is the cinematographer’s lens choice. The lens is the unseen hero of the big screen, a way to see what the director has imagined, and a way to explore the emotional response we have to characters, events, and, most importantly, to story.

Unlike the heroes of cinema history (Buster Keaton, Ozu, Hitchcock, Welles) who almost exclusively shot on one lens, most filmmakers in the contemporary era use a variety of lens sizes to shoot. Some directors stand out through their choice to use just one specific lens all the way through a challenge that seems foolhardy to some, and irresistible to others.

In this article, I’m taking a look at some of the most striking lens choices made by directors in recent years. More specifically, we’re looking at the effect of lens length on storytelling in three very different films: Cronenberg’s Cosmopolis, Nemes’ Son of Saul, and Call me by your name by Guadagnino.

Director of photography, Peter Suschitzky ASC, went with a 21mm lens for Cosmopolis. A decision arrived at in conversation with the director, David Cronenberg. Suschitzky confesses to liking the discipline imposed by using only one lens for a film, a discipline certainly compounded by the restricted space of a limousine wherein much of the action of the film takes place.

Based on the 2003 novella by Don DeLillo, Cosmopolis tells the dark and scary tale of the obscenely wealthy Eric Packer. In an interview with The Film and Digital Times, Suschitzky confessed, “I knew ahead of time that it would be, in many ways, the most difficult picture I would ever do”.

While this adaptation didn’t exactly light up the reviewers, it is an interesting illustration of our topic today, chiefly that lens length often tells half the story for you. The main location of the film is the huge and ungainly limo from which Packer conducts his dubious business. Naturally, this is a tight space and certainly one that posed challenges in terms of lighting and shooting. The 21mm lens gives the film a little bit of edge, and somehow captures the zeitgeist of the pre-crash cyber-capitalism world – just as the novella itself.

The 21mm lens helps to keep the events and characters of the film at arms-length, distanced, cold and of another time. It helps to create the kind of facsimile of the early noughts that we might remember or at least, might be starting to recognise now as a unique time with its own set of values and desires. 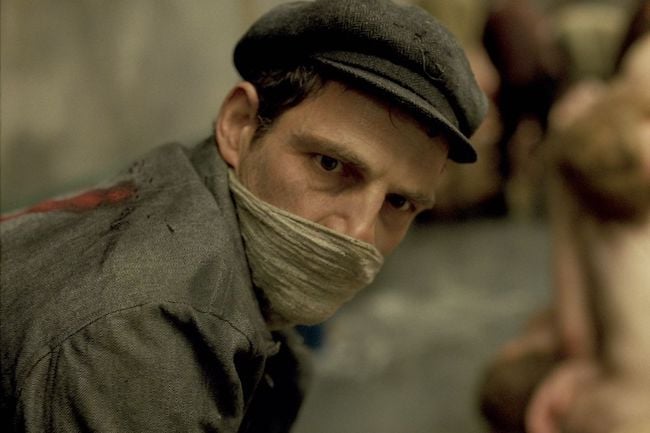 Directed by László Nemes, with cinematography by Mátyás Erdély, Son of Saul is by any account, a uniquely horrifying holocaust film. Undoubtedly, it is the chosen focal length and shallow depth of field that amplifies this horror. We are forced to witness the terrible events of the holocaust from the titular Saul’s perspective – up close, but almost detached at the same time.

Saul Ausländer, played by Géza Röhrig, is a member of the Sonderkommando, a group of male concentration camp prisoners who were given extra privileges in exchange for their unfathomably awful jobs, clearing the gas chambers of bodies in between gassings.

With Saul face-on and centre frame, we see the horrific events that surround him take place behind him, at the edges of the frame, out of focus, hazy, ethereal – enough so we kind of know what is happening, and equally enough so that we cannot avoid what we see. It’s the lens choice that makes the showing the unshowable problem that holocaust films have always grappled with, very real and upfront.

At the same time, there’s a kind of distance, perhaps in part from Röhrig’s very fine performance, but undoubtedly also thanks to the incredibly shallow depth of focus. The effect of this it to create a sense of disassociation for the viewer that mirrors Saul’s understandable disassociation from the events that make up the last days of his life.

Saul is focused on a series of objective singular goals – like giving a proper burial to a young gas shower survivor (yes, this really did happen). As such, the very visceral and physical horrors are kept at arm’s length. Instead, we have in that almost confrontational shallow focus, Saul’s empty, expressionless, yet rage-filled and resigned face to guide us through this terrifying landscape. This is the film that really illustrates the idea that lens length is central to storytelling in visual narratives. The lens and the depth of field captures the compressed horror and rage of the concentration camp in an amazingly affecting way. 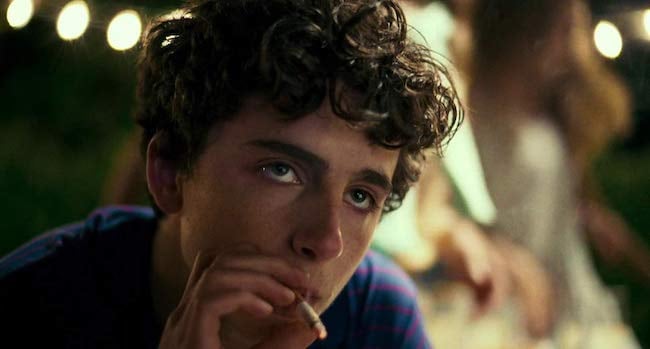 Call me by your name

Our final film, Call me by your name is a coming of age film about intimacy, summer, and the beautiful Italian landscape. In an unusual approach, in fact inspired by David Cronenberg, director Luca Guadagnino requested that DP, Sayombhu Mukdeeprom use only one lens to shoot the film. In an attempt to capture the beauty of the Italian landscape as well as the intimate details of an intense and life-changing relationship that takes place during a long and languid summer of leisure.

The one lens, natural light approach was a unanimous decision between director and DP but also one that resulted in a number of challenges, not least those presented by the unusually inclement weather during the shoot. Mukdeeprom arrived at the lens in question thanks to one of the main joys of the film, it’s observational quality, as he explained in an interview with Kodak: “Observation was my goal on this film – to try to observe every moment. The Cooke S4 35mm was close enough for the close-ups and wide enough to frame the characters in relation to one another and in perspective with their surroundings”. So in a film that deals with scale: large and small, geographical and personal, the 35mm lens proved to be the perfect way to capture a summer of life-changing and momentous growth (and peaches, don’t forget about the peaches…).

And finally…
Lens choice and focal length happens to be one hot ball of contention. I’ve gone for a mix of contemporary films here but let us know in the comments about your fave one-lens film.