Sixty years ago, Canon made this. It was revolutionary 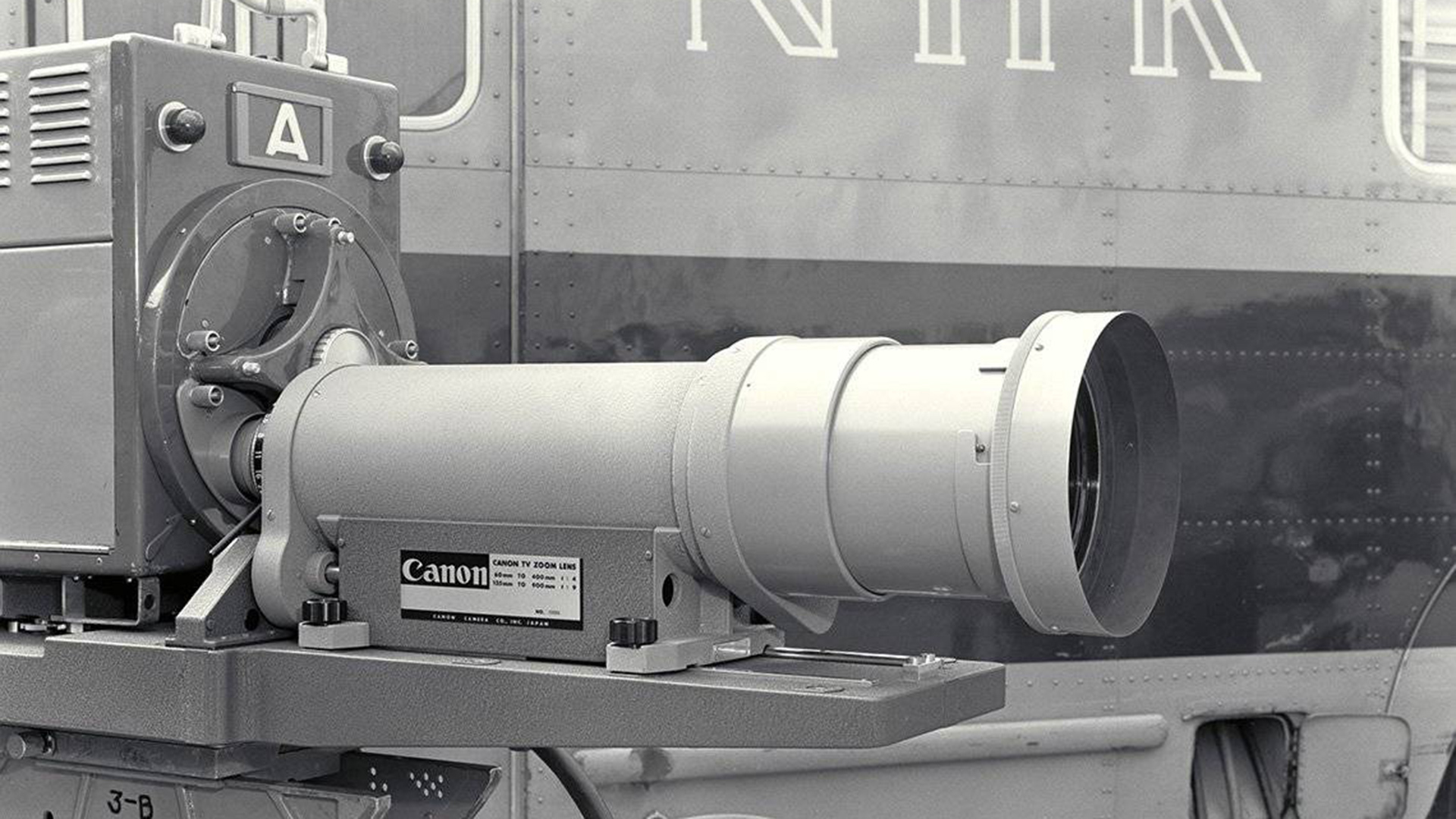 Replay: It's just over 60 years since Canon released its first broadcast lens. Phil Rhodes looks back on a history of lens innovation. 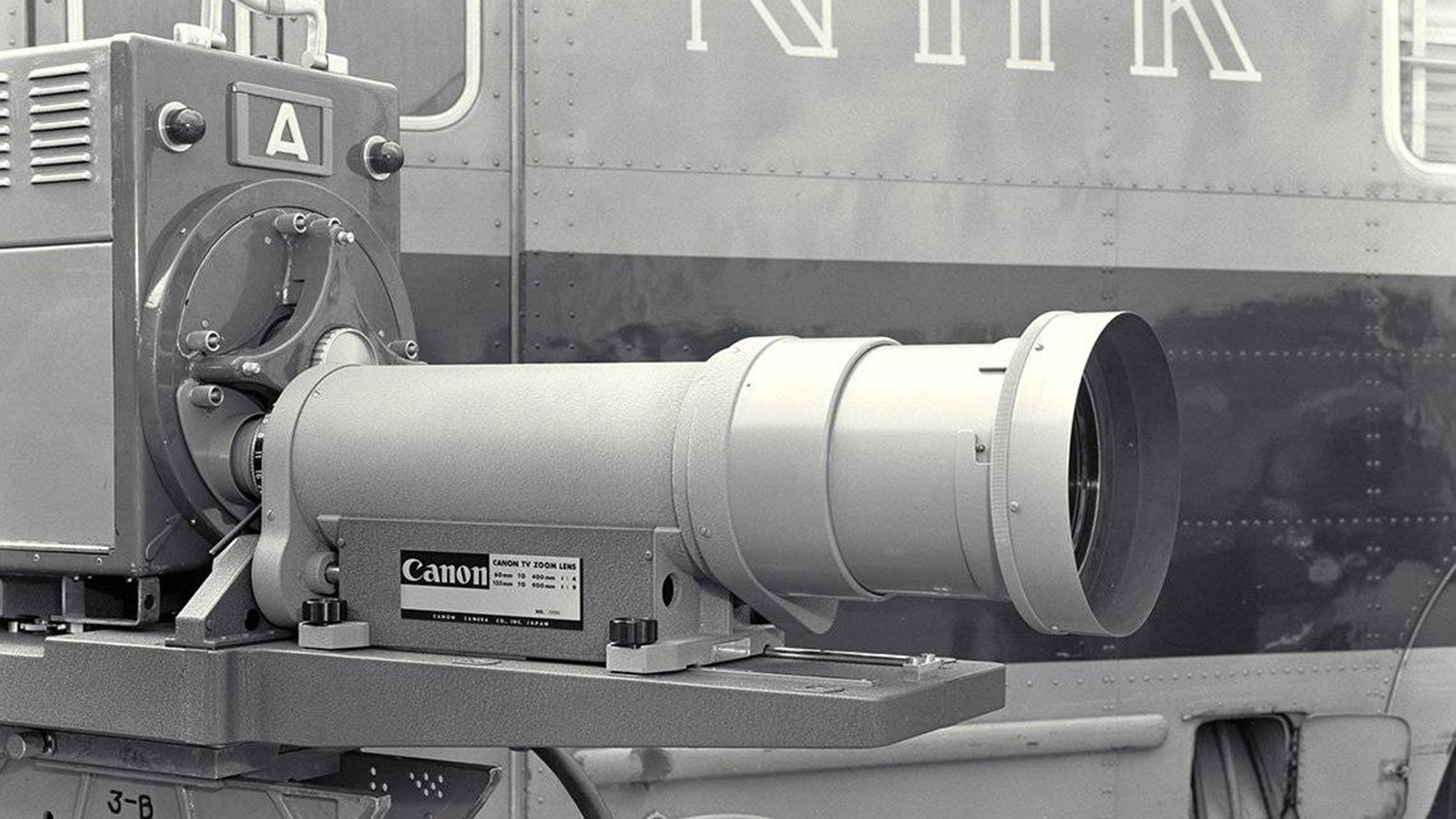 One of the most notable things about Canon's first-ever broadcast lens is that its specification doesn't seem particularly unusual, despite the fact that it was released in 1958. The IF-I 60-400mm zoom would have been designed for very different sensors than those in modern cameras. It would have been a tube camera, probably black and white at that time, although the first colour cameras, the RCA TK series, became available a few years earlier.

With or without a colour splitter block, a lens of the late 1950s would have had to cover a much bigger sensor than a modern broadcast lens, and the requirements for sharpness and contrast would have been rather less. Still, a 60-400 F/4 is the sort of thing we might expect to see in PL mount in 2018. Canon make a 30-400 T2.95-3.7, though the performance is probably just a tiny bit higher.

The reason we're talking about this is that the 60-400 was Canon's first TV lens. Now, sixty years on from that release, the company would probably be very happy if we all thought about its technological developments, particularly things such as the development, in the 70s, of artificial fluorite for lens manufacturing. Fluorite has very low dispersion, which describes the tendency of glass blocks to act like a prism and spread out the spectrum of light. Low dispersion allows engineers to produce lens designs with reduced chromatic aberration.

Similarly, Canon's expertise in automatic focus has become well known in the C-series cinema cameras; they were among the first to make box lenses for broadcast cameras with particularly effective automatic focus options. Canon made the K35 series of prime lenses for cinema work, which are not much talked of but enjoy a credit history including Aliens as well as a 1977 Academy Award.

Yes, Canon is the proverbial three hundred pound gorilla of camera technology. It is no secret.

From the perspective of someone sitting in a lamentably de-industrialised western nation, though, it's difficult to look at the history of Canon's broadcast and TV division in isolation. The company traces its history back to 1937 and the Precision Optical Instruments Laboratory, and the name comes from the Bhuddist deity Guanyin, pronounced Kannon (観音) in Japanese. The name “Kwanon” was used for an early camera design. Initially, the company didn't even have the ability to make optical glass, and actually bought lenses from the even older Nikon, but they're both still here in 2018 and, with the C700, Canon is operating at the leading edge of cinema camera design.

There are lots of factors involved in keeping a business operating for eighty-one years, but a large part of the company's current success has to be vertical integration. To put it more simply, Canon makes sensors: it does not have to go cap in hand to a semiconductor manufacturer in order to manufacture a competitive camera. Canon makes lenses: it can sell them with its cameras, and it can guarantee compatibility with lenses that are widely owned; it's created an ecosystem that it owns. Yes, these things mean maintaining extremely expensive research, development and manufacturing facilities, but it also means that a manufacturer doesn't end up having to pay so many other people to work for it.

Or, to put it another, rather blunter way, if you own more of the facilities involved in turning raw materials into products, you get to keep more of the money. It's a simple enough principle, but it involves looking to the future in a way that some businesses don't.

Of course, none of that has anything to do with the things that Canon would probably like us to talk about in the context of its lens division, such as its 1996 Emmy for CCD-compatible lenses, or the 8K-compatible broadcast-style zoom it developed for NHK's super hi-vision cameras. It achieves an impressive 18-180mm at f/2.2; if you have to ask, you probably can't afford it. Achievements range from the current CN20x50 lens, for shooting things that are very far away,  to the K5-25 cinema macro zoom lens of 1973, for shooting things that are very nearby.

Other companies have lenses, though. Other companies have cameras. How to round this off, then. Again, it's not so much to do with the lens division, but it's worth remembering that Canon, in the 5D Mk. II, was probably the only company who's ever made a hugely desirable, full-frame 35mm, low-cost video camera...

...without really meaning to.