Canon C700FF: what can you really do with a 5,9K Full Frame Camera? 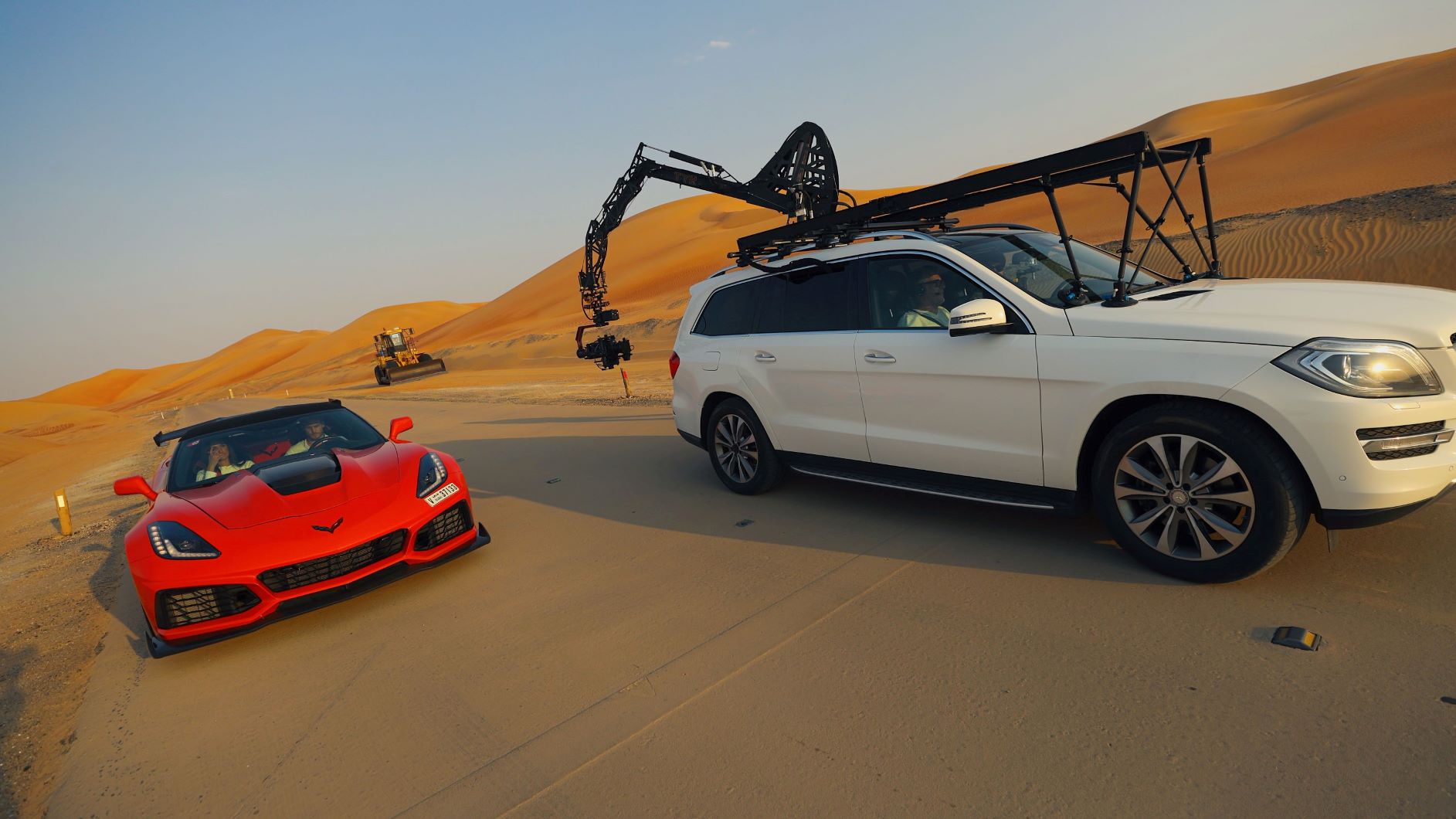 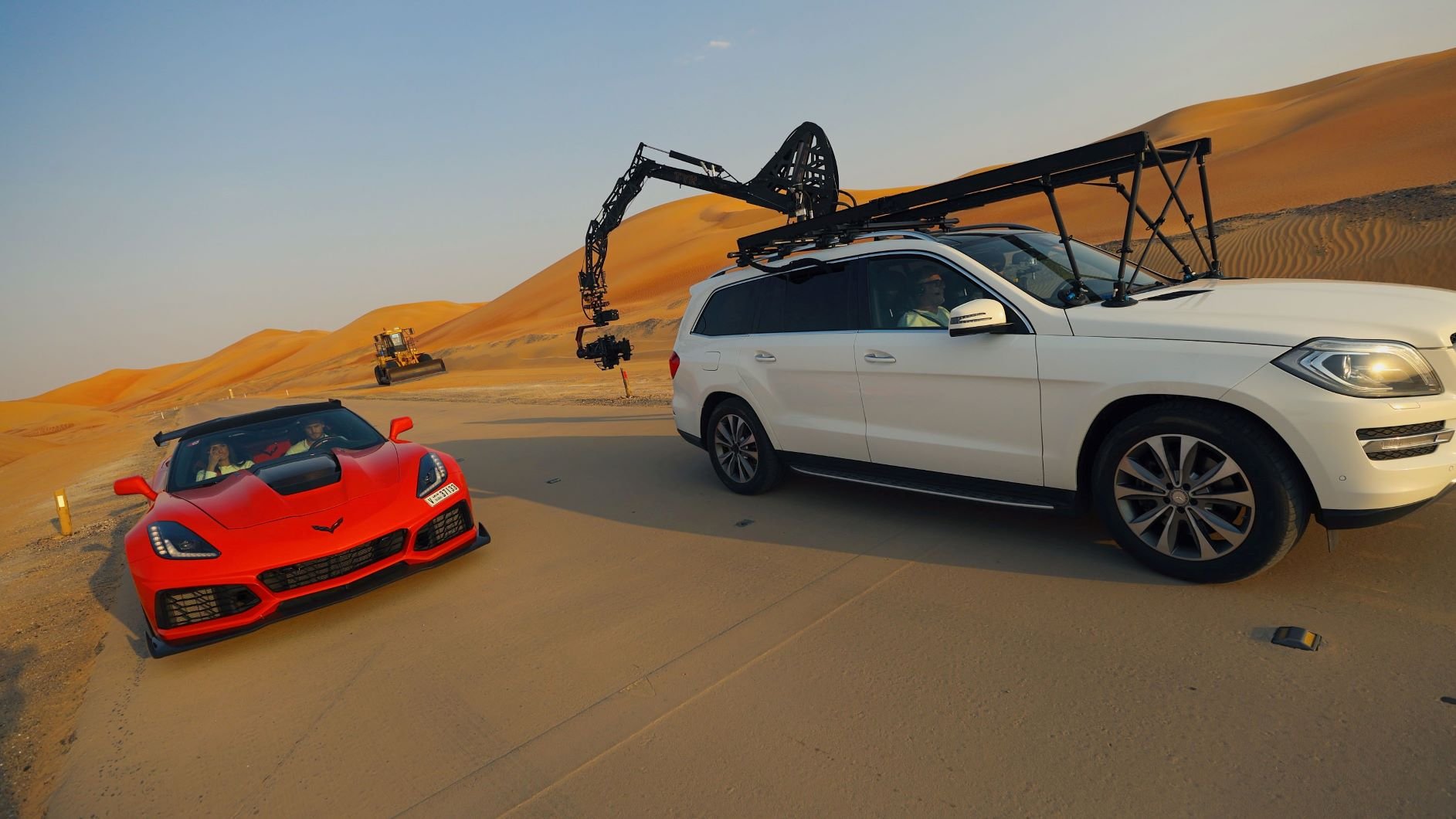 "Be careful with it", they said. "Don't get any sand in it and definitely don't hang it from a crane". Here's Brett Danton's wild adventure with a Canon C700FF.

What’s one of the harshest environments where you can possibly use a camera? How about in the Liwa desert, two hours from Abu Dhabi in the UAE: that’s where we decided to shoot a new commercial for Chevrolet, featuring the Corvette Stingray ZR1, destined to run in Esquire, UAE. Ultra fine sand, long days, temperatures around 45 degrees celsius and at one point nudging 55. If you really wanted to break something, this would be the place to do it.

The concept called for fast tracking shots through the desert, on a non-public road, weaving between enormous sand dunes. We chose a new portable Russian crane arm called the TYR.  It’s a remarkable system that works on most cars (even rental ones) using a roof rack system. It was flown in from Germany and paired with a Ronin 2. 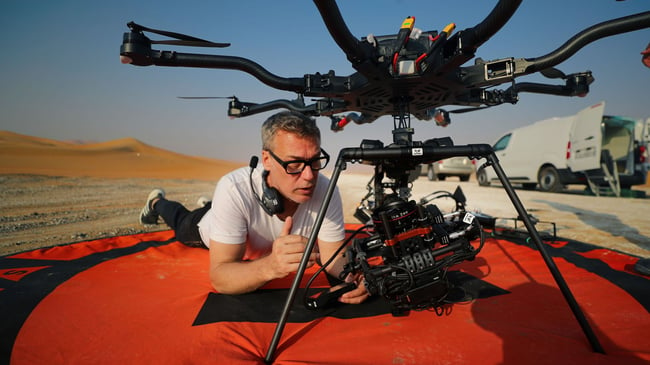 I wanted the commercial to have a very specific and different look. I chose the Canon Cinema EOS C700FF for the car shots, shooting most of the time with the iris wide open, giving us a sharp car with a slightly milky background on with the chosen focal length of 35mm. We used the C700FF alongside a Canon C200 shooting cinema RAW, with a 14mm lens for the aerials

I chose to use Canon’s own internal-recording codec, XF-AVC, using the full frame 5.9k sensor but down-scaled in-camera to 4k DCI. There were a few reasons for this but mostly because of potential issues with handling the data in the middle of the desert. One such issue was that we were shooting on a single piece of a winding private road that was around 10km long. We were always chasing available light. With a single 256 GB card we could record 70 minutes. With the much harsher storage demands of shooting RAW, I think we would have struggled within these constraints.

By the say, XF-AVC is, in my view, an underrated codec. I’ve been using it on the C700 since I started shooting with it and in my experience it grades very closely to RAW with a much smaller file size, and it’s easily accommodated in most workflows.

The Canon C200 was flown on Alta 8 supplied by UAE-based https://choppershoot.com. We noticed that in the high temperatures, the drone has less lift. Despite this, everything worked as it should and watching the “drag race” between the Corvette and the drone was a highlight. Hats off to the pilot, because judging the drone’s height against an monochromatic backdrop while flying low is very tricky.

The C200 copped a fair bit of sand, and on every takeoff and landing, the entire setup got engulfed, but, amazingly, it didn’t seem to mind.

We only had two days to shoot and the cameras were put through everything. The C700 was often only six inches off the ground, being pulled through fine sand at speeds over 100kph - and then flung into the air on the end of the highly manoeuvrable Russian arm. Everything was monitored through equipment supplied by Atomos and we had a Canon EOS R with the new Ninja V recorder on-set for a BTS film we were also shooting. All of this was put through the elements.

The C700FF seems to tick all the boxes: aspect ratio, frame speeds and codecs. I can’t think of a situation it wouldn’t cover. I’ve been using the original 700 for commercials over the last three years and this feels like a great evolution. The Canon focus guide is, I think, of great importance when it comes to shooting full-frame. I am seeing more and more soft shots on recent productions and feel it’s down to 1080p monitoring for 4K finals, and using peaking to judge focus. The larger sensor is even harder to focus, so any tool that gives you crucial focusing information is invaluable. 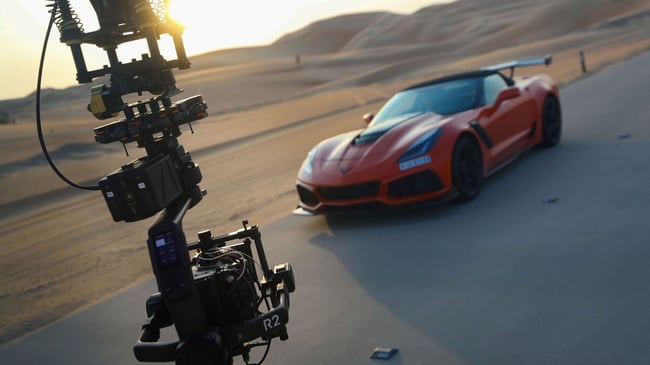 Using the C700 and C200 together worked well. I used both of them in Clog3 for mot of the time and then Clog2 when shooting into the sun and wanting to hold the shadows. The light was harsh but I never had an image outside of the dynamic range of either camera: the entire thing was shot with available light.

I kept this entire production at 25fps, using the full sensor. Full frame for me has a great look that needs to be treated with respect. I know in theory through the use of stops, focal length and sensor size the depth can be recreated, but the look of full frame so close to wide open can’t. What I do think is you need to be careful not to have everything so soft that it becomes annoying to the viewer. Most of this production was full frame at f2, and you would not get the same look from the same lens on a Super 35mm

Full frame is in vogue at the moment. I come from a stills background and I always preferred larger capture formats like 5x4 inch and 120mm. 35mm was my last choice. There was something about the look of the larger formats that just separated the subject from the background, and I feel the same with full frame motion (overall smaller sensor sizes of course but the same relative advantages of the larger format).

The other thing with full frame is the lens choice that it opens up - especially some of the vintage glass. With the camera so sharp, the look should be created through the glass now.

More credits below the video

Thanks to the following for their help with this: