Are poor camera ergonomics a fact of life, or are we overlooking an obvious solution? 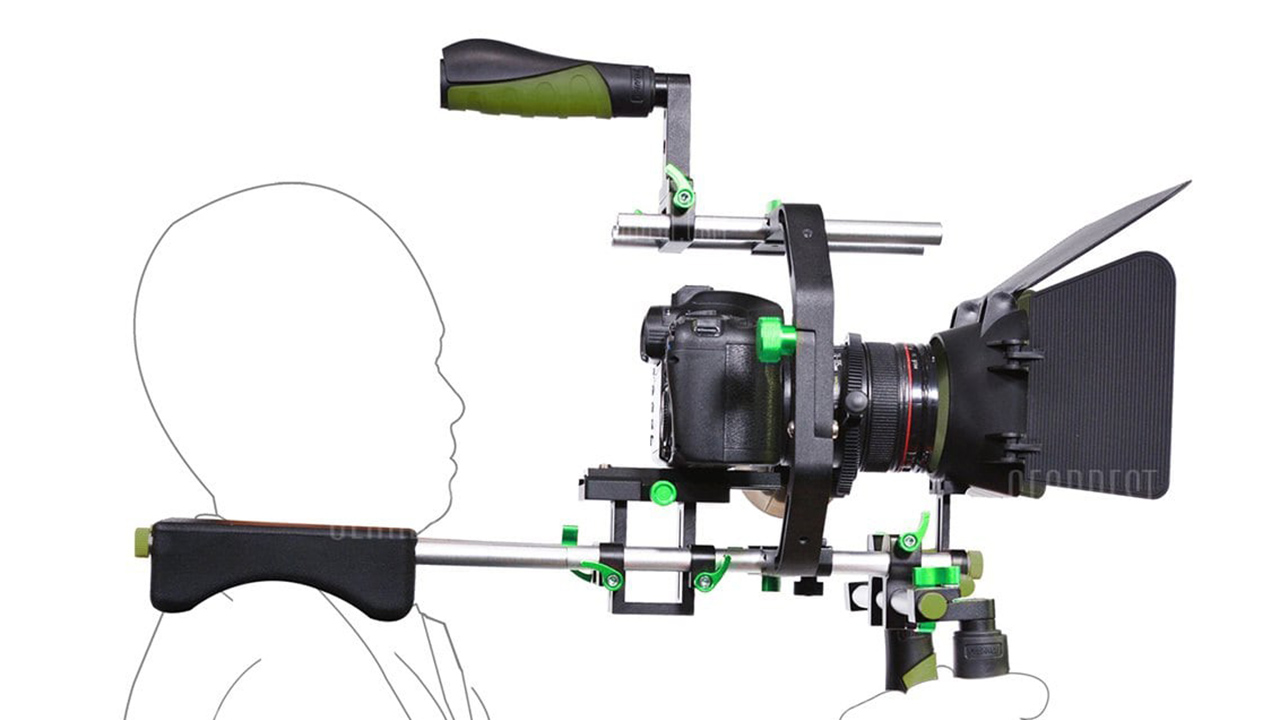 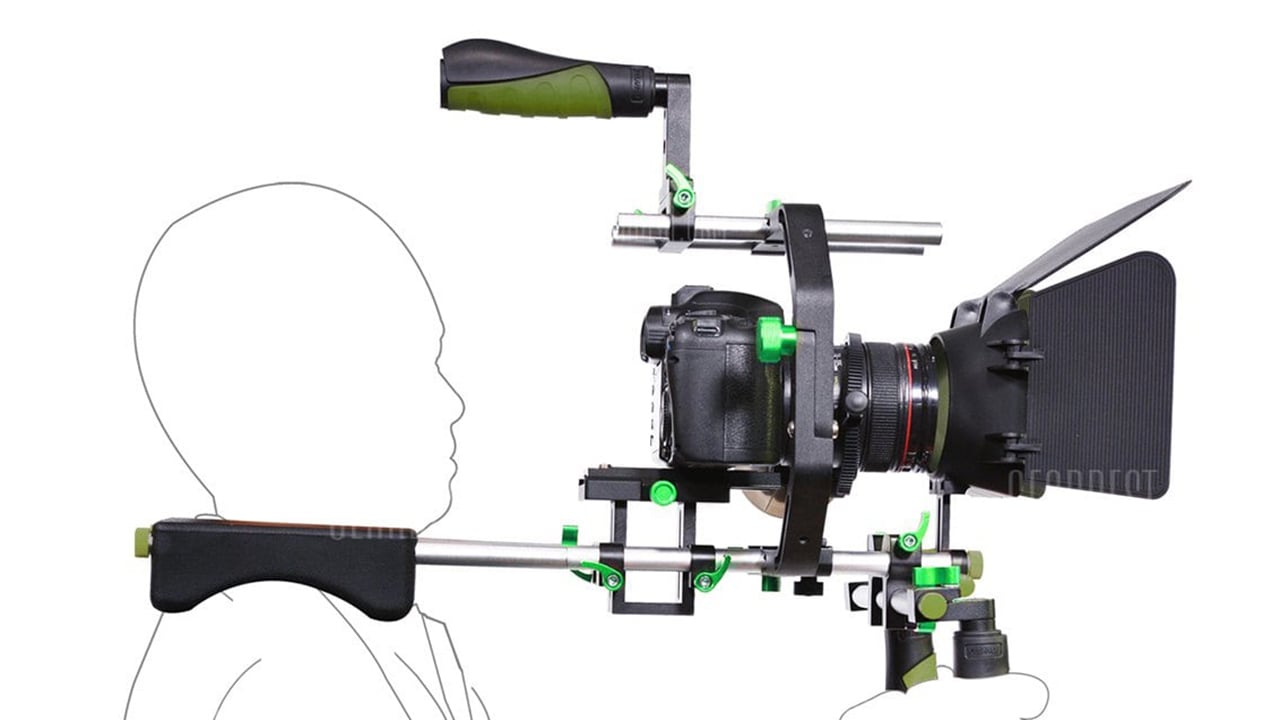 Replay: Handheld camera ergonomics, it has to be said, are not exactly great at the moment. A box with a thousand extra parts attached isn't the best way to stay mobile and work fast. But if ENG and documentary are your thing, there could be a solution out there that is vastly overlooked.

The problem with being asked to write about camera ergonomics is that it's a subject that's mainly informed by one's formative experiences. To grab an unconnected example, some people like to put a camera on a dolly and more or less leave it there, since it's easy to roll around. Other people quickly start to resent the fact that the camera now weighs 500 pounds and needs a whole extra person just to shift it sideways six inches. Apparently innocuous observations like these will already have a certain section of the readership lunging for the comment section, so let's be clear up front that our purpose here is to compare and contrast various ways of working in the hope that some sectors of the industry can learn from others.

Happily, things have calmed down a bit from where they were five years ago. With the likes of Ursa Mini on the market, it's now far less necessary to grab a DSLR and duct-tape it to a plank in the forlorn hope of making it through the next wedding, choir recital or local football game without losing an arm to fatigue. Blackmagic deserves significant credit for the excellence of its shoulder kit and viewfinder for the Ursa Mini series which is far sturdier than the arrangements offered by some competing manufacturers. If shoulder kits are to be the new normal for people who want a shoulder-mounted camera, let's hope they work as well as this.

Either way, let's hope the days of surrounding a Blackmagic Pocket Cinema Camera with a king's ransom in grip accessories are over. Or perhaps not, because people will still keep buying cell phones or cell phone-sized cameras only to discover then how difficult it is to get reasonable handheld camerawork out of them. If it's your inclination to look down on this sort of thing, think again. We could talk forever about how cell phones are now starting to produce shockingly good pictures, at least in decent lighting conditions, but that's not really the point. The point is that, regardless of quality, they're being massively used for the world's single biggest growth area in the media. More than one of the lectures at IBC showed that, sure, traditional broadcast media are growing, but achingly slowly, much more slowly than in the recent past, and that the likes of YouTube are massively outstripping them.

Will all that success and all that money trickle down to the point where people can spend it on camera gear? Well, maybe, because some YouTube channels will grow to the point where they're spending money on better gear and better crews, but those will be a vanishingly small minority. A lot of them will keep shooting with cell phones, perhaps in portrait mode (spit, spit) and rely on the witchcraft of digital image stabilisation. It works, but it robs phone cameras of sorely-needed sharpness and aliasing performance and can create strange effects when the image is motion-blurred.

Modern devices are flawed, but also have advantages

It seems unlikely, though, that people will start enmeshing a cell phone in large amounts of rigging. One of the incidental pleasures of modern photography (and even camerawork) is that it doesn't require seven extra pieces of luggage and it's this sort of ease and convenience that's made YouTube possible. If this stuff cost a lot to produce, if it created a lot of inconveniences, it would never have happened, so nobody who's currently wandering the globe with a phone in his or her pocket is willingly going to start carrying something the size and shape of that Ursa Mini any time soon. Phone ergonomics are awful, but if that's what you grew up with, it's hard to give up the portability.

Even news is now more often not shot on what most people would call an ENG camera. That sort of thing is reserved for ambitious documentaries – the glossy travel guides and cooking shows that drift towards Amira and Varicam, and the other big, chunky shoulder-cams which are shaped like news cameras but consume too much power and weigh too much for actual current affairs work. While we use terms like "electronic newsgathering" to describe shoulder-mounted cameras, it's more likely that news will currently be shot on cameras such as Canon's XF range.  More or less the whole purpose of that sort of camera is to make controls accessible and provide a wide-ranging zoom lens. The fact that ENG cameras don't sit on the operator's shoulder like they used to is a compromise over portability and aching biceps. 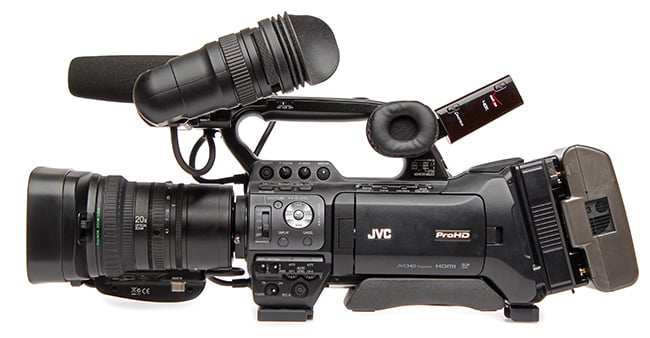 The JVC GY-HM850 is compact and lightweight, yet can balance perfectly on the shoulder

The product of all of this is – or perhaps should be – things like JVC's ProHD range, such as the GY-HM850, which combines many of the advantages of all the above. They're small and lightweight with real manual lenses and a shoulder pad in a position that actually balances nicely if you stack enough batteries on the back. It has to be a better idea to counterbalance a camera with the power supply, rather than just hanging a big lump of metal there to make up for the handling problems.

Do they produce the most cinematic, high-dynamic-range images imaginable? No. Are they usually used with the best lenses available? No. But they work beautifully for their intended purpose, they're affordable, and they're cruelly overlooked. Some HM850 packages come, for £7000 including VAT, with a 17x4.5 lens. A 9x19 zoom – which actually gives you less framing options on the appropriate sensor - is enough to make an already-weighty Amira terribly front-heavy. Naturally, there's no reasonable comparison in image quality here, but if there's a single product which draws together the threads of modern camera design, it's products like the HM850.

It's hard to argue with the level of flexibility that's on offer at the moment. Cheap cameras are a large part of the boom in user-generated content which is making traditional media organisations nervous just as much as it's making YouTubers rich. That being the case, the fact that shooting on a DSLR or cell phone makes your arms ache starts to seem like a bit of a side issue and if it does, you've cheap options anyway.

Are we in the future?