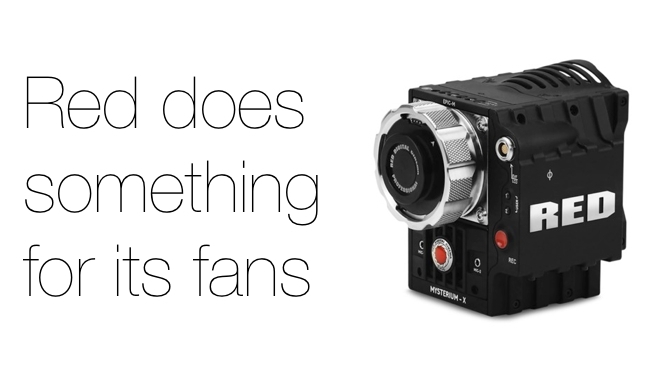 One big and consistent criticism of the RED Scarlet and EPIC cameras has been the fan noise. Even the die-hard owner operators who love their cameras compare it to a hairdryer when it is in full effect! RedShark contributor Freya reports

Those more critical of RED have had much jocularity about what kind of fans the new 6k RED dragon sensor might need. (insert picture of jet turbine...).

At present when the EPIC camera reaches a certain temperature the fan kicks in suddenly making a loud racket and startling people, perhaps not a problem for a music video but definitely not the right camera for an unobtrusive fly on the wall documentary. In fact some users have stated that they sometimes prefer to use their older Red One camera because it is quieter.

This is all about to change

Red have announced that all of this is about to change though and they are making a two-pronged attack on the noise problem with both new software and hardware. Firstly they are adding new intelligent fan algorithms that scale the fan speed as the temperature increases. So the fans are able to maintain the camera at a lower temperature rather than turning the fan on at full speed when the heat situation has become critical. These new algorithms are expected to arrive with the next release of a major software build. Apparently it is capable of maintaining the camera at a sensible temperature indefinitely while still keeping the noise level well under 30db.

Secondly they are introducing an actual hardware fan upgrade at NAB this year! This will include two fans, a replacement for the existing top grill fan to make it quieter and also a new fan at the front where there was previously none.

The announcement relates to the EPIC camera. It’s presently not clear if the RED Scarlet will also be supported.

I suspect that the upgrade can’t come soon enough for the RED faithful! Quieter fans will open up a lot of new possibilities for the EPIC camera in situations where it has been difficult to work with in the past.

Perhaps RED will even attract a few more fans? *groan*.