This is Canon's most important camera for ten years. Hands-on with the Mirrorless Canon EOS R

For quite understandable reasons, a lot of people are getting it wrong about this camera. They're going through the specifications and saying "they could have done this or that differently" and - especially - "why does it have to crop the 4K video when it should downsample from the full frame?". We'll deal with this question in a minute, but first, here's why it's so important.

Canon introduced the EOS system around thirty years ago. With only a few exceptions, lenses and accessories made back then still work now. They obviously don't support things invented since then, but you can't blame anybody for not being able to predict the future.

The new camera is both about the future and leaving the past behind. It's about the future because it is a completely new system that has an extraordinary amount of flexibility and capacity for new developments. It leaves the past behind because with this new system, there is no downside to owning a mirrorless camera in comparison to a DSLR. We don't know for certain but we suspect that Canon will continue to make DSLRs for a while, but this will be the tipping point. This was the day that DSLRs started moving towards the past tense.

Just an example of how profoundly capable this new system is: when data is transferred between the lens and the camera, it does so at 40x the speed of even the recent EOS 5D IV. It means that all manner of metadata can be passed between the lens and the camera, and that lenses and camera bodies can behave as if they are truly part of one system. Digital lens correction becomes more precise. Autofocus is faster. Assignable control rings on the lenses can adjust any camera parameter in real time.

Autofocus - which is of course dual pixel - is very good and seems instant.

I liked the feel of this camera. To be honest, if I were blindfold, I would have no trouble telling this was a Canon. It's full of small but important touches, like the fact that when you take the lens off, you can't see the sensor, because a flap automatically covers it when the camera senses that a lens is about to be removed. 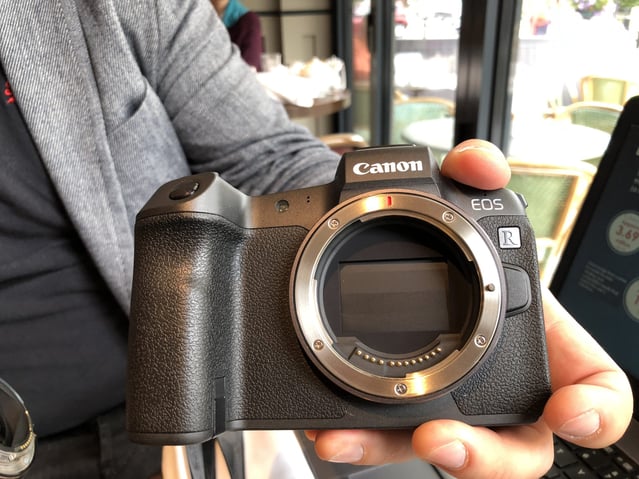 So don't focus on the specifications. They matter for this camera, but not in the future. The thing to remember is that this is the day that Canon's modern future started.

As for the camera itself: it feels solid and convincing. The lenses themselves are big and hefty. This is certainly not a compact system. But the lens system itself - because Canon had a completely clean sheet to start from - is designed to put optical performance above all else. So if it was felt that better optical performance could be obtained by modifying some physical aspect of the camera, then that's what was done.

Some might be surprised to see that the 4K video output is cropped from the full sensor. It's a different approach but we should wait to see the images before criticising. There's more than one way to do almost everything and I don't think the reason for Canon's choice was that "they didn't know how to do it", as some commenters have suggested. What's more likely is that Canon has looked at the relationship between price and performance, and also considered that this is primarily a still photography camera, and has done it this way because that's what made sense to them in the markets they were aiming for. Having said that, we expect the pictures to be very good because the EOS R has a processor that is two generations on from the ROS 5D 4's chip, and image processing is absolutely crucial to image quality these days. 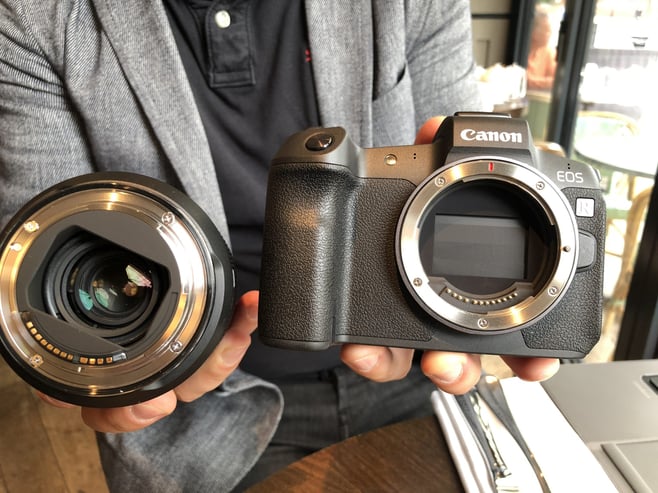 The 30 megapixel sensor is related to the one used in the 5D IV, but don't be misled into thinking this is a bad thing (again, other publications have got this wrong - saying that the R is essentially a Mirrorless 5D 1V. Apart from the sensor, there's virtually nothing in common). The reality is that this is the best sensor that Canon has currently and it is renowned for taking very good pictures: so why wouldn't they use it in a new form factor? New sensors are very expensive to develop from scratch. (Remember, for example, that Sony uses the same sensor in the six year old F55 and the brand new FS5). What's more important is that in the new camera, there is so much more processing and capacity for colour science that it's quite reasonable to expect pictures that are significantly better than earlier cameras that use the same sensor.

Of course, we should all reserve some of our enthusiasm or criticism until we've seen the pictures and tried the camera for ourselves. We expect to get the first review samples in October.

Meanwhile, here are my first impressions, in a video that was made within minutes of me seeing the camera for the first time. (Many thanks to Matt Yates of Canon UK for going out of his way to make sure I had a chance to look at the camera on launch day.)