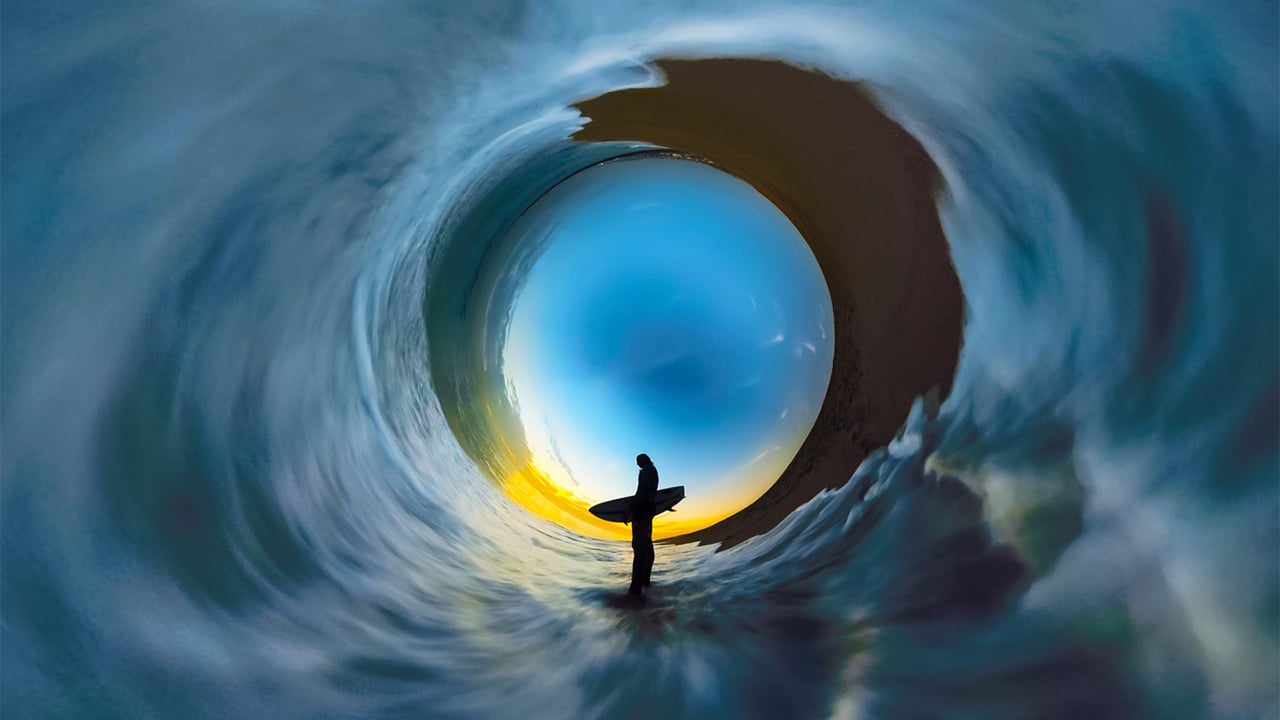 360 video? Isn't it a fad just like 3D? Apparently not, and it could change the way you capture video, even if you aren't publishing it in 360 form.

Being a filmmaker can get expensive. It seems like the list of one-trick-pony tools to buy grows and grows.

Gimbals, sliders, cable camera systems, tripods of every shape and size, not to mention mics of all types and millions of doodahs and whatsits to do this and that.

I’m sorry to break it to you, but there’s one more bit of kit you might soon be adding to your wish list: a 360-degree video camera. And not to shoot 360 video. 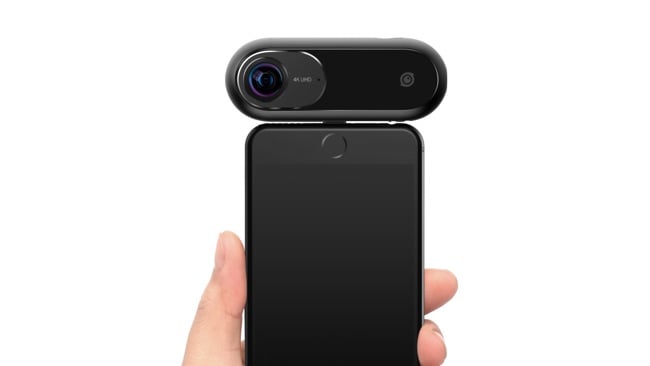 The Insta360 was the first camera to launch with overcapture – or, as they call it, free capture – built into the camera’s companion app.

A couple of years ago at Photokina, GoPro was showing off this cool trick its recently purchased Autopano 360 video stitching software could do. You could crop out fixed-frame video from a 360-degree video to use in traditional film projects. 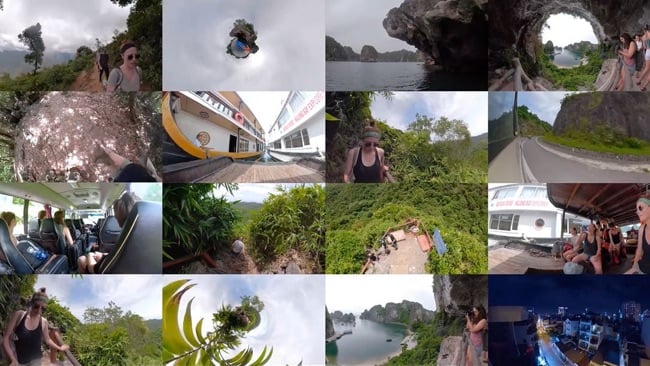 Within the following year, three cameras would come out with this feature – dubbed overcapture or free capture – baked right into their companion apps (the GoPro Fusion, Insta360 One, and Rylo), and GoPro would launch its free VR plugins for Adobe Premiere Pro and After Effects which make it possible to overcapture video from any 360-camera on the market.

All of a sudden, for as little as $300 (with the Insta360 One) flat filmmakers could get shots that were either impossible, expensive or overly complicated to capture with a traditional camera.

We aren’t limited to a single field-of-view, nor are we limited to remote-controlled equipment or spaces a camera operator can go.

Imagine a journalist trying to cover a protest. They’re trying to take photos and videos, write down names and contact information, live tweet and send information back to the newsroom, all while scanning the situation to assess where something might happen next – hoping they don’t miss it. Imagine if they could attach a 360-camera to a monopod in their backpack (a.k.a. “The Humiliator”) to pull video from if need be.

Or, think of a vlogger who normally works alone. Overcapture lets them use a 360-camera on a selfie stick to get shots that look like they could only be captured by a camera operator walking ahead of or behind them. It’s an invisible camera operator.

Think about its use cases in adventure or travel photography or videography! GoPro Associate Creative Director Daniel Sherer summed it up well:

“We don’t have to set up as many cameras to capture exactly what we’re hoping for, giving us increased efficiency and the ultimate flexibility in our storytelling. We are no longer limited by our ability to anticipate where the action will happen.”

I ended up shooting/experimenting quite a bit with overcapture with the GoPro Fusion during my “work-free” vacation. Here are some sample shots (5.2K, 30 fps, stitched and overcaptured within the iOS app, no post-processing beyond retime):

Secondly, the very nature of overcapture means that you’re shooting the same shot twice: once as a 360 video, and once within the app or in Premiere to crop out the fixed frame shot.

Thirdly, the quality of most 360-cameras just does not compare to the quality most traditional cameras can capture – but it’s getting better.

That number – 4K/8K/whatever – refers to the total horizontal pixel count your camera can capture. Spreading 4,000 pixels across a 16:9 frame will be much denser than spreading that same number of pixels across an entire sphere. 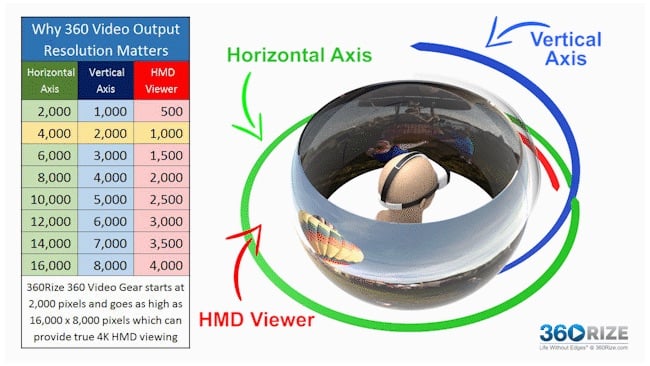 In today’s average VR headset, a user is typically seeing about 90 degrees of that 360-degree video. Meaning, they’re seeing one-quarter of the total pixels. That means if a 360-camera could capture 4K video, the viewer would actually be experiencing something more similar to 1K quality (for reference, 1080p has 1920 horizontal pixels – the 1080 refers to the 1,080 vertical pixels because that’s the way it used to be done…).

So, cropping in on a 4K 360 video to use that in a fixed-frame piece will not look like 4K. It won’t even look as good as 1080p. For that, you’d need an 8K camera like the Omni, which – even at its dramatically reduced price of $1,399 – not everyone can afford (not to mention, the added burden of using six separate GoPros).

(Sidenote: Of course, the exact number of horizontal pixels in your overcaptured video depends on how much you crop in on it. These exact numbers are just a general outline.)

Like I said, I think there are certain use cases where even video falling a bit shy of 1080p quality is better than not capturing it at all or to gain access to shots you could never capture otherwise. But, I realise 360-cameras have a way to go. Here’s hoping for an 8K 360 camera at a consumer price point by the end of 2018 ;).

Earlier this summer, I was asked to present my take on what’s next for 360 video, virtual reality and augmented reality at Mojofest in Ireland. Initially, I thought about sharing something sexy and sophisticated, like volumetric video.

But when I thought about that word – ”next” – I could think only of overcapture’s unlocked potential.

When I got offstage, it became immediately apparent from the feedback I received that overcapture resonated with the event’s filmmakers, journalists and vloggers. Many said a 360-camera would be their very next gear purchase. Perhaps I had predicted the present more than I had predicted the future.

And, hey, maybe after they master overcapture, they just might shoot some 360!

If you’re interested in learning some best practices for shooting overcapture videos, check out this post I wrote on Immersive Shooter about the best cameras for overcapture, recommended workflows and top tips.