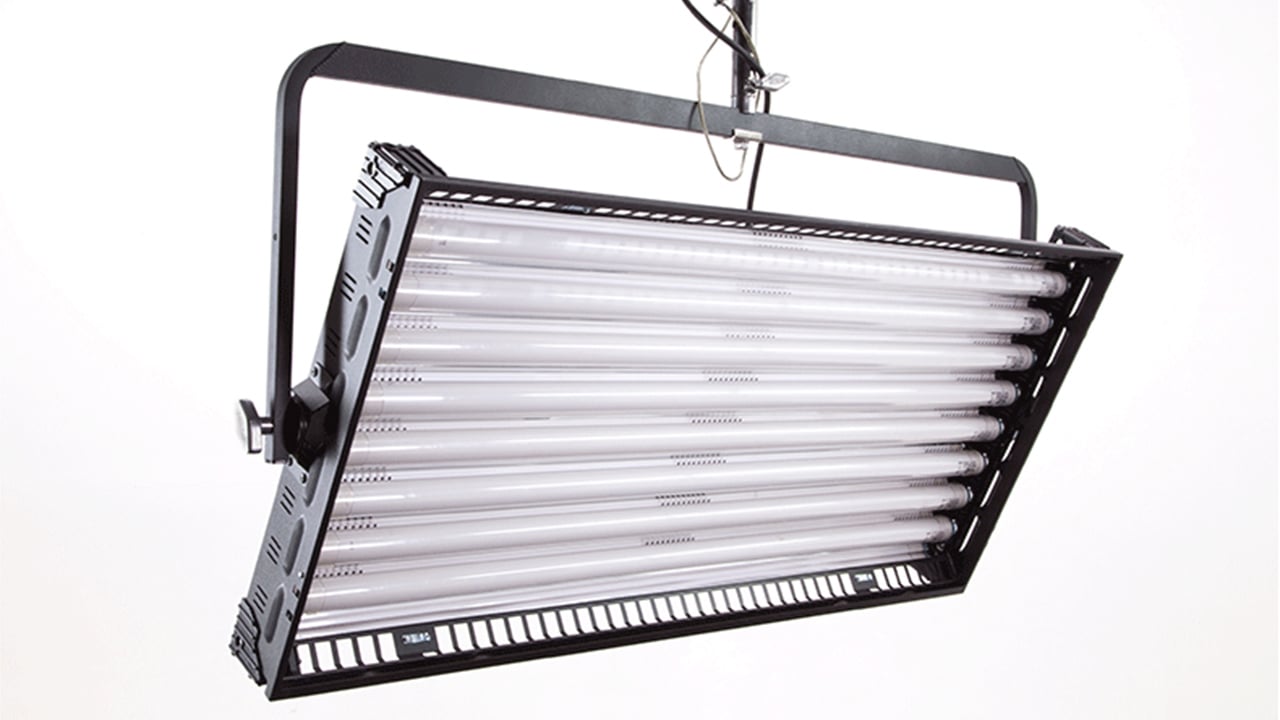 In his continuing series on different types of lighting, Neil Oseman looks at the history, characteristics, and uses of flourescent lighting.

The two types of lamp we’ve covered so far - tungsten and HMI - produce almost exclusively a very hard quality of light. The third kind, fluorescent, is a much softer source.

Fluorescent units use very similar technology to HMIs, with electrodes exciting a gas so that it gives off UV light. The phosphor coating on the tube absorbs the UV light and fluoresces, i.e. re-emits the light in the visible spectrum. Like HMIs, fluorescent units require a ballast to regulate the current.

One way I use fluorescents is as a ‘window wrap’, a soft source that augments a hard HMI coming in through a window to wrap the light more pleasingly around the talent’s face. Or I’ll place a fluorescent outside the room, to represent or enhance indirect daylight spilling through a doorway.

Being soft sources, fluorescents have little ‘throw’, meaning the intensity drops off quickly as you move away from the fixture. However, they are energy efficient, and they don’t get very hot.

One of the most notable early uses of fluorescents was in 1987 for Robocop, when cinematographer Jost Vocano chose the fixtures because the long, thin reflections looked great on the cyborg’s suit. The same year, gaffer Frieder Hochheim and best boy Gary Swink custom built high-CRI fluorescent units for the comedy-drama Barfly. They had created the Kino Flo, which is the most commonly used brand of fluorescent lighting in the film industry to this day.

Kino Flos are usually referred to by two numbers, the first representing the length of the tubes in feet, and the second representing the number of tubes. So a unit with two tubes, four feet in length, is called a ‘4ft 2-bank’, often written as: 4’x2 (pronounced ‘four by two’). The most common units are 2’x4 (a.k.a. ‘fat boy’), 4’x4 and 4’x2, but others are available, including ‘Single Flo’ units and 6ft/8ft ‘Mega’ units.

The heads of these fixtures are separate to the ballasts, and they are connected by a header cable, just like HMIs. This is convenient on drama productions, making the head lighter and easier to rig, and the controls of the ballast easily accessible. The ballasts allow you to turn individual tubes on and off as required, and also feature a switch marked either Hi/Lo or 4ft/2ft, which reduces the light output by adjusting the waveform of the current.

Some models of fluorescent, however, combine the fixture and ballast into a single unit, for example the Kino Flo Diva-Lite (2’x4) and Tegra (4’x4). They are designed primarily for interview/ENG applications where it is more convenient to have everything in one. One advantage of integrated models over their remote-ballast cousins is that they are smoothly dimmable down to 5%.

Fluorescents are usually supplied with removable plastic grids known as ‘egg crates’ or ‘louvres’ to make the light more directional. They come in black, silver and ‘honeycomb’ varieties, the latter available in 45º, 60º and 90º angles so you can choose how directional the light becomes – and, as a side effect, how much intensity you lose.

Various fluorescent softbox kits are available on Ebay from Hong Kong sellers. Unfortunately, not only are they flimsy in construction and questionable in terms of electrical safety, but the CRI (colour rendering index) of the lamps is very, very poor. If you need a cheap soft source, you would be much better off bouncing a halogen work light off a white card.

Indeed, firing an incandescent source into a bounce board will give you a better quality of light than even the best fluorescent. But a fluorescent fixture won’t make the room unbearably warm, it can emit daylight-balanced light, and it’s quicker to set up than a bounce board and the attendant flags. In a nutshell, it’s more convenient.

Finally, fluorescent energy-saver lamps are common in homes and businesses today, but they will often flicker or cycle on camera due to their low-frequency ballasts. Because of this, and the often poor CRI and green tinge, it is common practice when shooting an interior to replace energy-saver lamps with traditional tungsten ones.

In the fourth and final part of this series, we’ll delve into the fast-developing world of LED lighting.