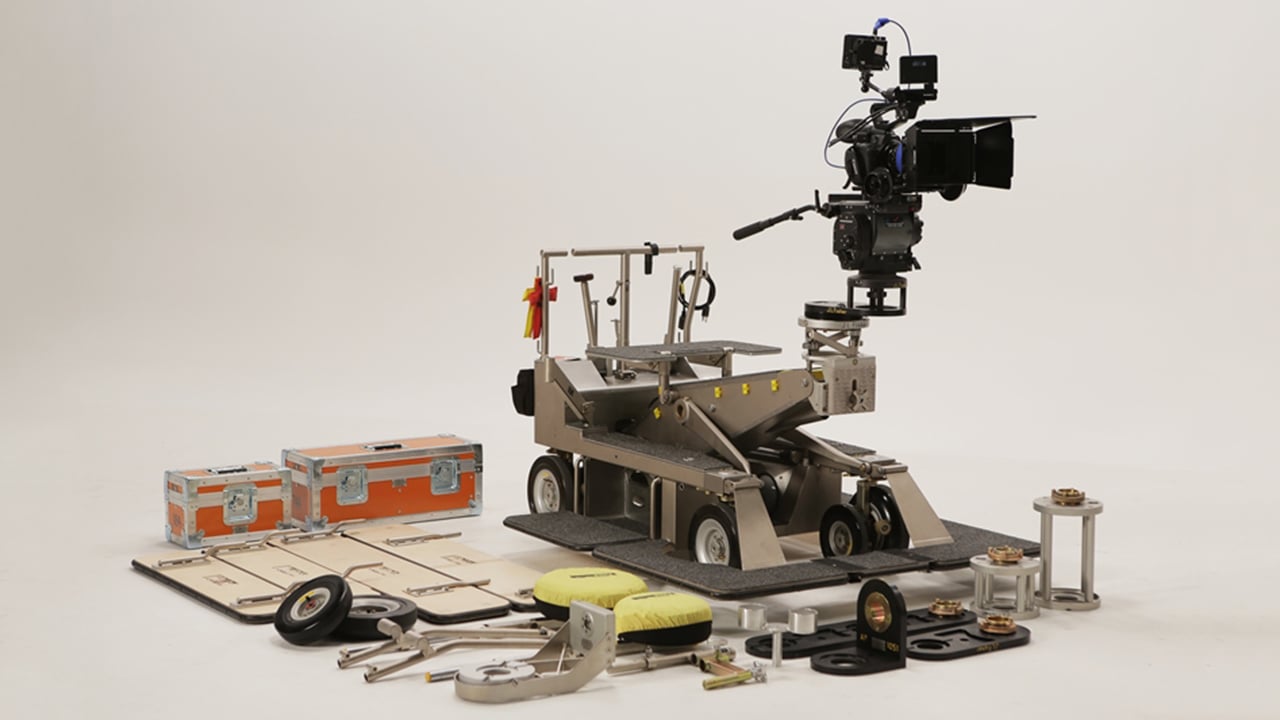 Here's our tribute to the rather heavyweight, yet incredibly adaptable workhorse, the Fisher 10 Dolly. One of the unsung heroes of film and video.

“Items placed here,” reads a famous notice, “may damage dolly when crushed.” Today, I'm talking about a very famous piece of filmmaking equipment, and not in order to entice you to buy one, because you can't. 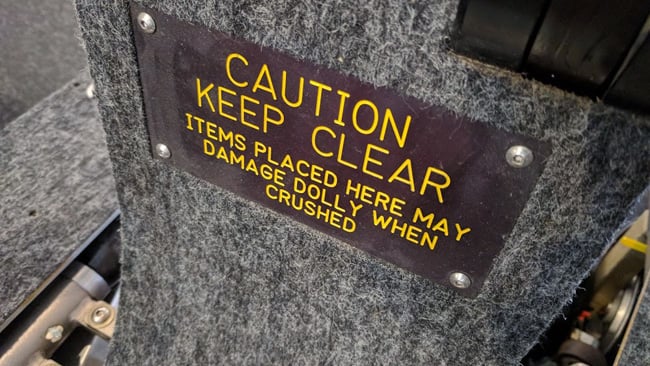 Do not leave limb here

That message is engraved on a plaque on the hydraulic lift beam on the famous Fisher model 10 dolly (as well as its sibling models, which are also easy to like.) The dolly is exclusively leased to rental facilities by the manufacturer, J. L. Fisher, and despite its near-ubiquity in the world of single-camera drama it tends to be fairly rare outside that field simply because it is very much a crew-served weapon. It weighs in at nearly 200 kilos of “carrying weight” depending on the required accessories and so tends to enjoy a medium-sized vehicle all to itself. Rental facilities are sometimes cautious about letting them out to anyone who might damage the dolly by crushing something, especially if that something is a crunchy, bone-filled part of an incautious human.

About gimbals and drones 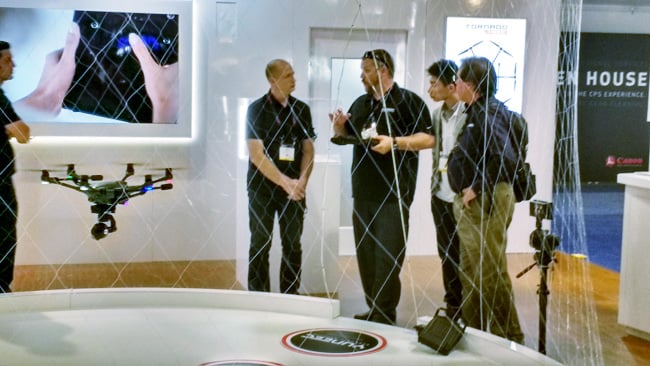 Drones are great but don't work for dialogue scenes

But isn't this thing a dinosaur? Versions of the Fisher dollies have been in use and constant development for decades. One might have expected any such thing to be overtaken by new technology.

But no. Even a basic dolly – and the Fisher 10 is anything but – can do things that nothing else can, hence their continued popularity. It's not uncommon to hear complaints, from people used to DSLRs, that a Fisher 10 is big (true) and heavy (true) and can just as well be replaced by a gimbal. This is certainly not true, at least for some of the most powerful ways to move a camera. Gimbals provide a lot of mobility but compromise in controllability and repeatability. The big issue – and the obvious one – is that they only stabilise in two or at most three axes – pan, tilt and yaw. They don't actually stabilise the position of the camera, they stabilise the way it's pointing.

How much this will matter, depends on how much instability there is and how that instability compares to the distance between the camera and the objects in the scene. If all the objects in the scene are ten feet away and the camera is only floating around a few inches, stabilising the rotation has roughly the same effect as stabilising the position. But in a (usually) two-dimensional medium like cinema, the purpose of camera movement is often to reveal parallax in the scene. That generally means having objects close enough to the camera that they visibly change in position relative to the background when the camera moves, and gimbals simply aren't effective in that sort of situation. The handheld motion of the camera will be visible in those nearby objects. 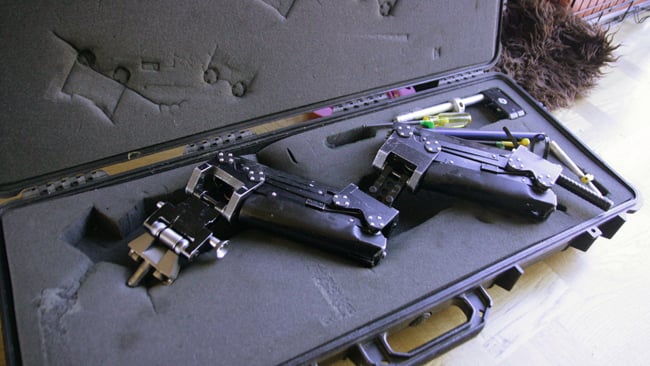 Steadicam does a better job than a gimbal (a manually-operated gimbal is one of its components) by stabilising in all six axes, although even the best operator would accept that there is inevitably some small degree of instability – drift might be a better word – in a Steadicam shot. Drones can use GPS and other, more local, sensors to achieve surprisingly good automatic repeatability, and do great work on landscapes, but they won't ever work for interior dialogue scenes.

Given all this, it's surprising to find that a lot of shots made from dollies like the Fisher 10 don't involve any camera movement at all. In a studio or any location with anything even remotely approaching a flat floor, it's quite normal for a camera to live all day on the dolly. That's because the Fisher 10 has – well – a couple of features other than its ability to move along a track.

Chief among them is the feature that J. L. Fisher call the “lift beam.” It's hydraulically-actuated from a pressure reservoir that can be charged up either by hand or by plugging the dolly into mains power. As a result, the arm can raise or lower a 227-kilo load over a range of a hair less than 1.2m, with full speed and position control, and creates only the very faintest sound of hydraulic fluid passing through tubes. Again, this feature is used more often to position a static camera than it is to actually produce motion on shot. Another key feature is the steering, controlled from a tiller at the back. Features include conventional steering from the rear wheels, crabbing with all wheels pointing in the same direction, or with all-wheel steering allowing the dolly to turn in a turn of any radius, including spinning on the spot. 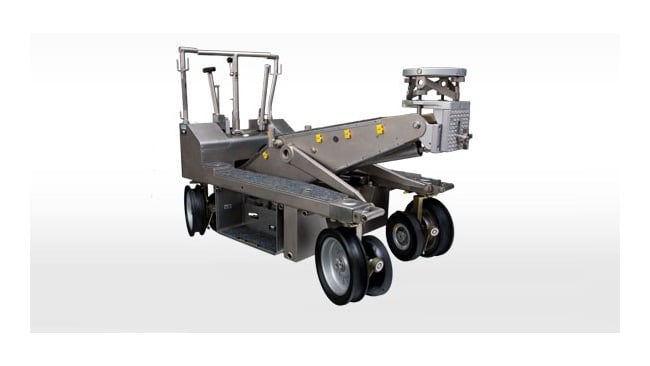 A full description of the dolly's capabilities and the accessories made by Fisher would take up several days' worth of articles. Let's just agree that the capabilities are extensive, down to the option of several different types of wheels for running on the floor and several others for running on track, seats that rotate and slide, places to put batteries, and a complete jib arm setup.

Made obsolete by gimbals? No; emphatically not. They are big and heavy, but they can put a camera in a huge range of places very quickly. In some ways, it's easy to shower awards on such a classic, and they only work well on a certain kind of production, but the J. L. Fisher model 10 dolly is Gear We Like, so long as we have a vehicle to transport it.