A fairytale goes digital: Shooting the feature version of The Little Mermaid 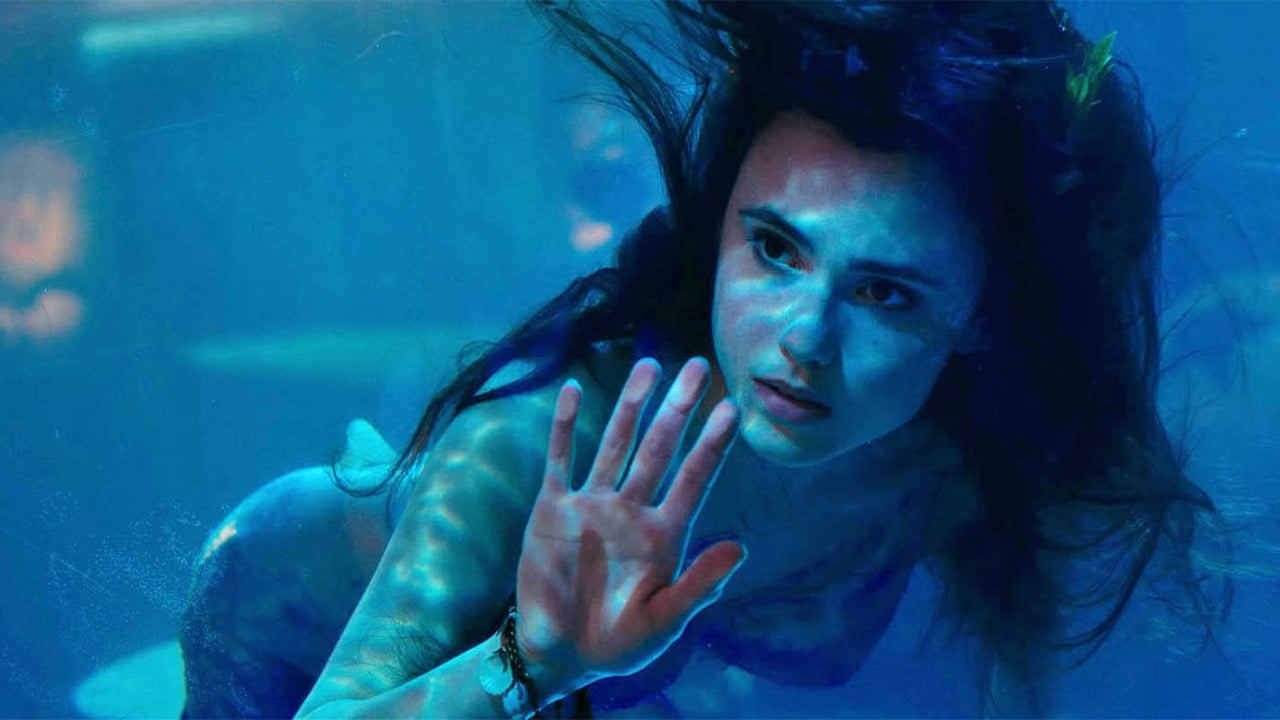 Neil Oseman, Redshark contributor and DOP for the feature version of Little Mermaid (released 17th August 2018) writes about the challenges and exhillaration of shooting a 1930s fairytale with modern, digital cameras

This August, the live-action independent version of The Little Mermaid hits cinemas across the US. I thought I would share with Red Shark readers some of the challenges I faced and techniques I employed in photographing this 1930s-set fairytale.

Directors Blake Harris and Chris Bouchard were clear from the start that they wanted a colourful, magical, family-friendly look. References they gave me included Hook (1991, dir. Steven Spielberg, DP Dean Cundey), Big Fish (2003, dir. Tim Burton, DP Phillipe Rousselot) and A Little Princess (1995, dir. Alfonso Cuarón, DP Emmanuel Lubezki). I was also inspired by John Seale’s work on the first Harry Potter movie (2001, dir. Chris Columbus). As you can see, our touchstones were from the very top league of filmmakers!

I flew out to the film’s production base in Savannah, Georgia, USA in March 2016, with five weeks to prep before principal photography. However, just two weeks into that prep period I knew that we would be shooting the show’s modern-day book-ends, due to the availability of Shirley MacLaine. 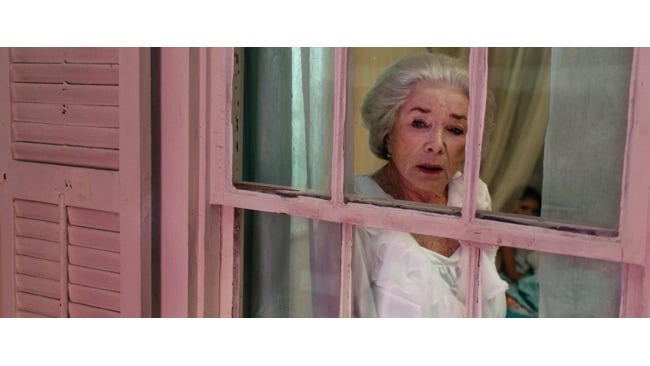 As time was short, I selected the Arri Alexa, being comfortable with that camera from my previous feature. I chose Cooke S4 glass for its creamy, period-friendly look, with an Angenieux 19.5-94mm Optimo zoom for the ‘B’ camera, so that operator Tim Gill could reframe on the fly if necessary. To give the modern-day scenes a subtly different look, I shot them with Zeiss Super Speed Mark I lenses, which have an interesting three-leaf iris. To take the digital edge off the images and further add to the fairytale feel, I shot everything through a Tiffen 0.5 Soft FX filter.

Diving in at the deep end, the very first shot was a close-up of Shirley MacLaine. Photographing an Academy Award winner who’s had such a long and impressive career was certainly an educational experience. She was very aware of how she was being lit, positioning her own bounce boards at times, and asking about my choice of lens diffusion before she even stepped on set.

I had the grip and electric team build a book light, a wedge-shaped arrangement of a bounce board and diffusion, to create a nice soft source for Shirley’s key. I was very gratified when she watched the playback and complimented my work.

Three weeks later, principal photography began at a townhouse in Savannah, standing in for Boston, before moving to a charming rural home for scenes set in Mississippi. Wherever possible, I used haze and large HMIs to push big shafts of light through the windows, producing a sunny, upbeat look.

Next, we moved to a large field out of town, where the art department had been working hard to construct a period-accurate circus. It was a very impressive sight, centred around a big top that had been driven across the country from LA, and apparently, the same one used in Water for Elephants (2011, dir. Francis Lawrence). Speaking of elephants, there was one of those too, a friendly creature called Minnie, not to mention a couple of zebras who sadly never made it in front of the cameras! 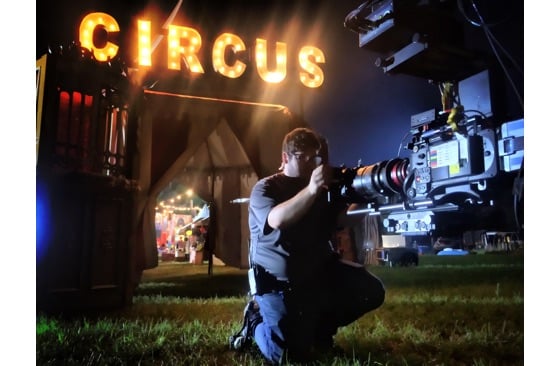 The challenge for me was to light all this, as virtually all the circus scenes took place at night. Getting together with my gaffer Mike Horton and key grip Jason Batey, I planned a huge 80KW set-up. This involved two 18K HMIs on a condor (cherry-picker) for moonlight, two nine-light Maxi Brutes inside the big top to make it glow, numerous string-lights bedecking the midway, par cans uplighting the banners, and numerous other units scattered around the site. The hero shot, rising up over the entrance tent to reveal the whole shebang, was accomplished on a 31ft Giraffe crane with a Scorpio remote head.

I have often blended tungsten and daylight-balanced lighting in my career, but as production on The Little Mermaid progressed, this became a real hallmark of the film’s look. In fact, I even pushed the colour contrast further with gels. When we shot the first reveal of the eponymous mermaid (Poppy Drayton) in a tank in the ring of the big top, I lit her with HMIs gelled with Steel Blue, while illuminating the surroundings with Maxi Brutes gelled with Moroccan Frost (an orangey-pink diffusion). This really made the colours pop and delivered the magical feel which the directors wanted.

We used a simple trick to create watery, rippling light for this sequence and others: a grip stood nearby with a frame of blue gel, wobbling it slightly. A light was fired at this rather than through it, so that it would reflect off creases in the gel, onto the talent. 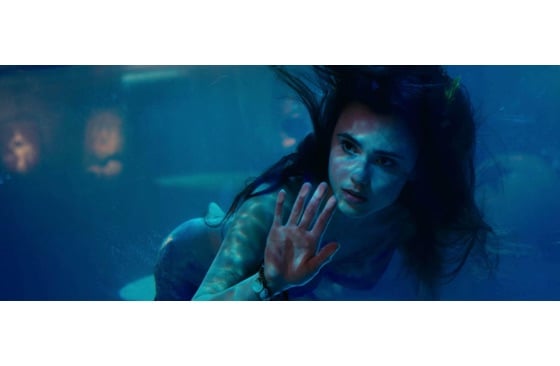 Over the next few weeks, we shot on a variety of sets and locations and I was always on the look-out for a splash of colour, a bit of textural cross-light, or some beautiful backlight that I could add to heighten the fairytale vibe. One of the most important scenes, however, involved only natural light.

The climax of The Little Mermaid takes place in the ocean at sunrise, with three of the principal cast up to their waists in the water. As one of those actors was just eleven years old, and the scene was so emotional and dialogue-heavy, it had been the subject of much conversation and consternation during preproduction. At one point, plans were even drawn up to build a partial beach set on stage, backed by a blue screen. 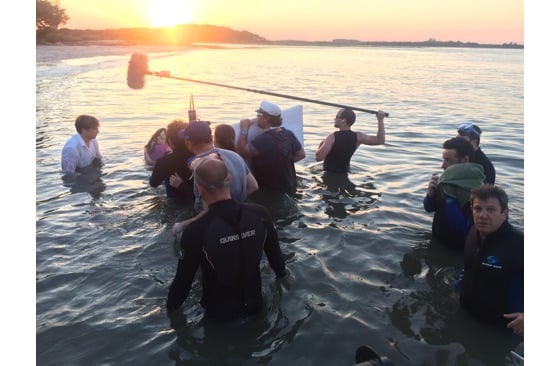 In the end, it was decided to shoot the sequence for real, albeit cheating sunset for sunrise. The plan was to capture just a few handheld long takes on a beach on Savannah’s Tybee Island (where several scenes from the Baywatch movie had very recently been lensed). I used the apps Sun Tracker and Helios to determine exactly where the sun would set and the cast was rehearsed thoroughly on dry land. The hair department informed us that Poppy’s locks would take an hour to dry once wet, so we would only get one chance that day at filming the complete scene. Adding further to the tension, when my assistants tested the splash housing for the camera, it leaked!

Fortunately, the weather was perfect and cloudless, and when the sun had dropped to the right height above the horizon, we waded in and got started. My 2nd AC carefully watched the unprotected camera to ensure it didn’t fall into the water. The scene went beautifully the first time. I reframed throughout, keeping the low sun in the background and making sure that it flared out when the hero and heroine had their Hollywood kiss.

All in all, The Little Mermaid was a fun challenge to shoot, and I can’t wait to see what the public make of it when it reaches the big screen on August 17th.