The X-H1: At last a mirrorless camera for videomakers from Fujifilm 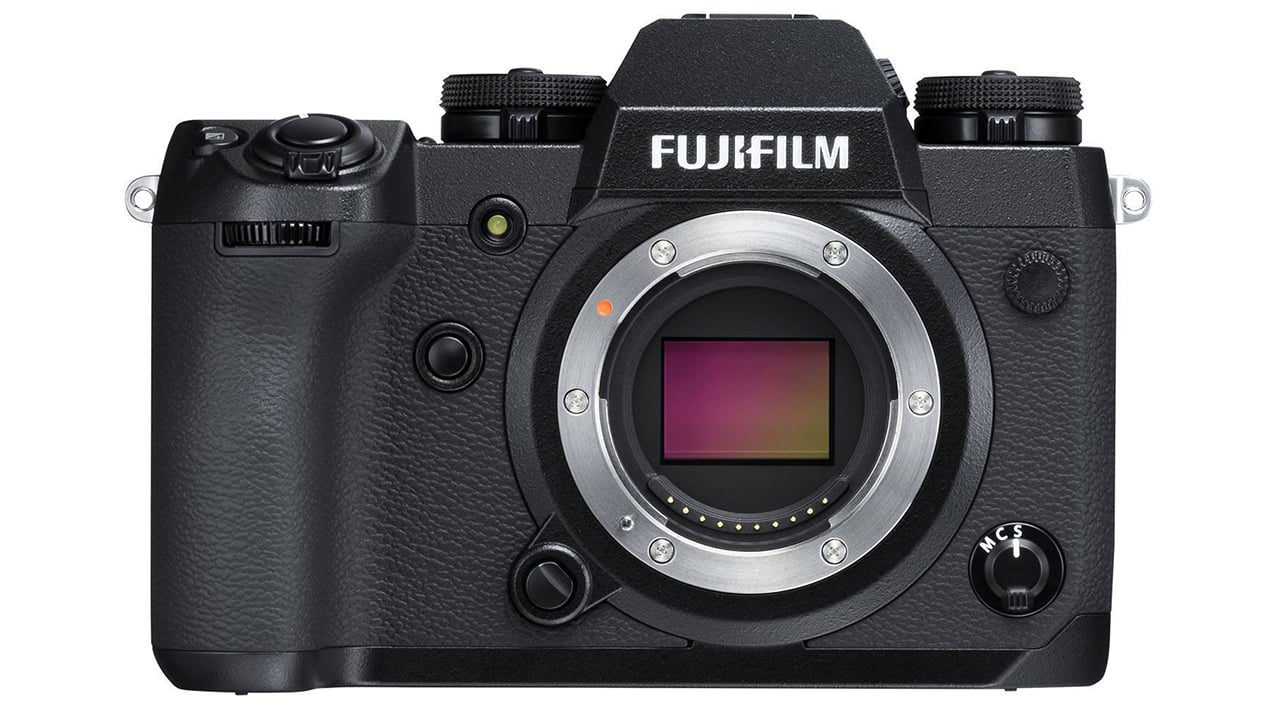 Fujifilm is known for its image quality. Now you can get it in a video capable mirrorless camera.

Fujifilm is not usually the first company name that rolls off the tongue when people think of video capable stills cameras. But that might change with the newly announced X-H1 mirrorless camera.

Many moons ago Fujifilm used to make DSLR cameras. And very good they were too. Exceptional in fact, with legendary sensors that contained separate photosites for shadows/mid-tones and highlights, allowing an incredible amount of highlight detail or over exposure to be recovered. It was a sad time indeed when it stopped producing them.

However, the company did not stop producing stills cameras, many of which are now very highly regarded. The range even includes a mirrorless ‘medium format’ camera in the form of the GFX-50. But as a camera range associated with video, it hasn’t had any real traction, until perhaps now.

The X-H1 by any stretch looks like it will be a very capable stills camera. For starters the 24MP APS-C camera houses an internal 5-axis image stabiliser, which features three axial accelerometers, three axial gyro sensors, as well as a specially developed dual processor unit. The company claims that the system is so good it will allow for a full 5.5 extra stops in combination with lenses that do not already have their own stabilisation built in. To further help the stabilisation system, the shutter has a shutter absorbing mechanism to reduce vibration and shutter noise. Useful for moments when the need to be discreet is required.

Fujifim is clearly very proud of this new system, claiming new production breakthroughs that have made it possible. For example a laser measurement device is used during the stabilisation system manufacture to ensure a component flatness of twice the precision of previous processes.

The sensor used is an X-Trans CMOS III, which Fujifilm is claiming produces minimal aliasing and moire artefacts even when there is no optical low pass filter. This is backed up by the X-Processor Pro processing system for ultra quick autofocus calculation and minimal shutter lag of 0.045sec. The autofocus system can be set up with modes that account for objects that accelerate and decelerate, to ignore obstacles, subjects that suddenly appear in frame, and erratically moving subjects.

The body of the X-H1 is of full magnesium alloy construction, and is fully weather proofed. Fuji is claiming that the new body is scratch resistant equivalent to 8H surface hardness. So it’ll be safe from your children’s technical drawing pencils at least. 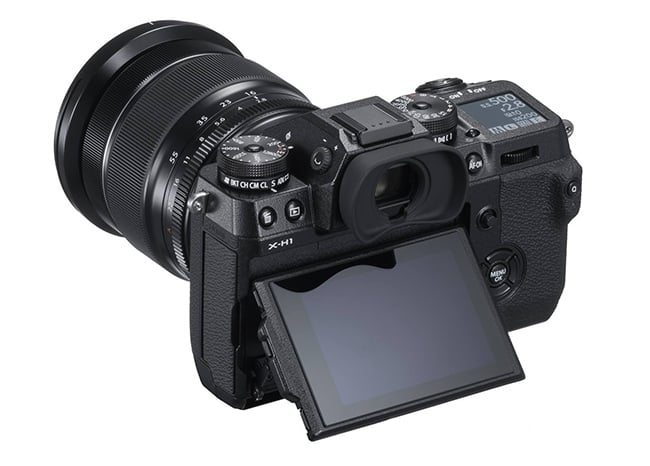 For both stills and video purposes a selection of classic film simulations are included. While I would not normally go for this sort of thing, the results so far look pretty convincing. Although while I love the Fuji Velvia film stock and the results that can be achieved, I never liked the frustration of working with it! So whether I’d want it built into a digital camera where I can usually leave that sort of looks application to Lightroom is up for debate. Some may love it, however.

Right, so that’s the general purpose stuff out of the way. What about that video mode?

The X-H1 records up to DCI 4K resolution (4096x2160), as well as being capable of 1080P up to 120fps. At the full 4K resolution it records at a bitrate of 200Mbps in H.264 format with linear PCM 24-bit 48Khz sound. So it is certainly not skimping on the bitrate. By comparison the Panasonic GH5S records up to 150Mbps in a comparable LongGOP formats.

Now, here is where things get a bit muddied. We’ve seen reports that the X-H1 only records video with 8-bit colour precision. However the camera features an F-log log gamma mode, which Fuji is claiming meets the ITU Rec.2020 specification. Which is interesting, because Rec.2020 is very specific in having a minimum of 10-bit colour as part of the specification. We’ll get back to you on that one.

Fuji additionally says that the camera has an “ETERNA” film simulation mode allowing 400% (12-stop) dynamic range, which produces subdued colour, and rich shadows with minimal need for grading. Confusingly perhaps, the specifications for the camera state that a 12-stop range is the cameras maximum, at 800ISO. So it remains to be seen how this ETERNA mode and the F-log modes compare in that regard.

An uncompressed clean output of video features to allow recording on third party devices. Again, it is not clear whether this is an 8-bit or 10-bit output.

The rear monitor can be adjusted in angle up to 90 degrees upwards, 45 degrees downwards, and 60 degrees to the right, which is useful, although video shooters are still likely to want to add additional monitors such as those from SmallHD. 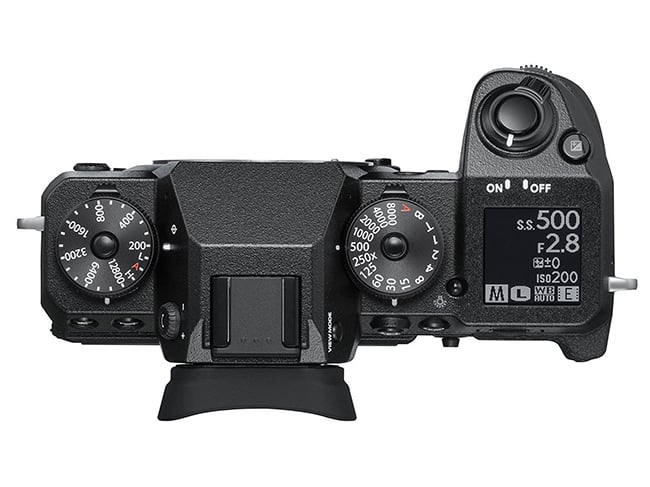 One aspect I can certainly say that looks rather wonderful though, is the fact that the camera body has dedicated dials on top for both ISO and shutter speed. If only every camera in the world had such controls rather than having to use a touch screen, delve into menus, or use one of those fiddly little roller dials! It's small details like this that make a camera a joy to work with rather than someof the more all-singing all-dancing headline features.

The primary lens interface is X-Mount. And Fujifilm has announced additional X-Mount versions of its 18-55 and 50-135 cinema zooms to ensure compatibility with the new camera, which will be available in May this year.

The X-H1 looks to be an interesting release. On paper the video mode might not appear to be as all encompassing as a camera such as the GH5, and the video recordings do unfortunately have a pesky 15 minute length limitation. This does not appear to be a limitation imposed by import regulations or tax duties. Instead it appears it is down to battery life. Fuji claim that the addition of the Vertical Power Boost Grip accessory (VPB-XH1) expands this recording time to 30 minutes in 4K. However the proof of the pudding will be in the eating, and if the quality is very good then there will be many users who will overlook such limitations.

For more information head on over to the official Fujifilm X-H1 site, while the official promotion video can be viewed below. The X-H1 will retail for £1699 for the body only, and £1949 with the Vertical Power Boost battery grip.