HXR-NX30E - we review this tiny and feature-packed Pro camera 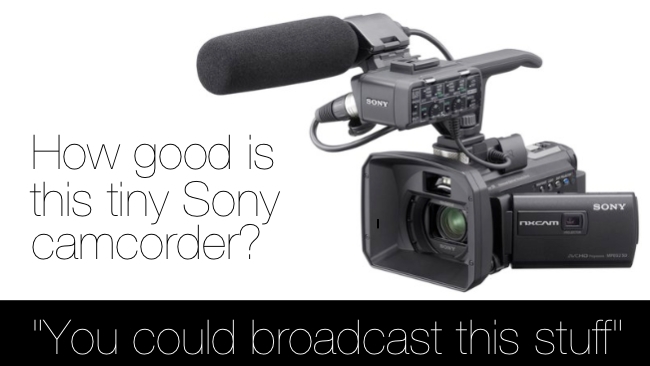 When we were approached by RedShark News to take a look at the new Sony HXR-NX30E we were delighted to be asked, so we gladly said,‘of course!’. We're always excited to get our hands on new technology and equipment so the camera was swiftly biked over to us

Having known nothing about the camera beforehand I was surprised by just how small it was when we first unpacked it. Literally the size of my hand! Like anyone would, I flicked on the camera and had a play with it before I even looked through the manual to see what other features it offers. And it does have bags of features. These include face tracking whilst recording, auto tracking for selected objects, slow motion function for golf swings, recorded GPS data for images and videos, a built in projector, and the list goes on!

However these are not features we would ever need in our day to day business, so we thought we would put the camera to the test (as we would with our main cameras, the Sony PDW-700 & Sony F3) to see how it coped. We gave ourselves the challenge of giving ourselves three hours to shoot a type of ‘travel show’ feature in our local area, the lovely old town in Leigh-on-Sea, Essex, located in the South East of the UK. Please watch the film on this page to see the results.

Shooting with the camera was pretty straightforward. Like all cameras in this price range, you can literally shoot with everything on auto, but I wanted to be in control of focus and exposure, so these functions were set to manual. The camera's functions and menu can only be accessed via the touch screen controls (aside from the manual focus wheel found on the front of the camera). I found it tricky sometimes to select the setting I needed, but this was probably in part due to my large hands – and the fact that the temperature during the morning never really peaked above freezing! You can see how cold it was just by the ‘blueness’ of the images.

Scrutiny in the edit

After returning to the edit suite and loading the footage in our NLE, we were pleasantly surprised by just how good it looked. 95% of the footage was very useable. When you are relying upon a camera’s LCD screen shooting out on a bright day you can never be sure you have nailed the settings, so the footage was better than we were expecting.

There is a wide range of cameras available in this price range, including some really good DSLRs such as the GH3. It’s certainly a congested market. However with the camera's professional XLR inputs, stabilisation feature and the solid image it produces, I think this camera may well find itself a place.

I believe the camera would be ideal for the many production companies today shooting weddings videos, when shooting with the combined features of auto focus and exposure will really compliment the cameras stabilisation feature, producing some really nice tracking shots. It’s also so petite that it might be worth larger production companies just having it in the bag to use as a B cam. I could certainly see us mounting it on a gorilla pod and using it for the profile shot on an interview, or even just to capture a shot were we just couldn’t get a larger camera.