More megapixels are coming. Just get used to it [opinion] 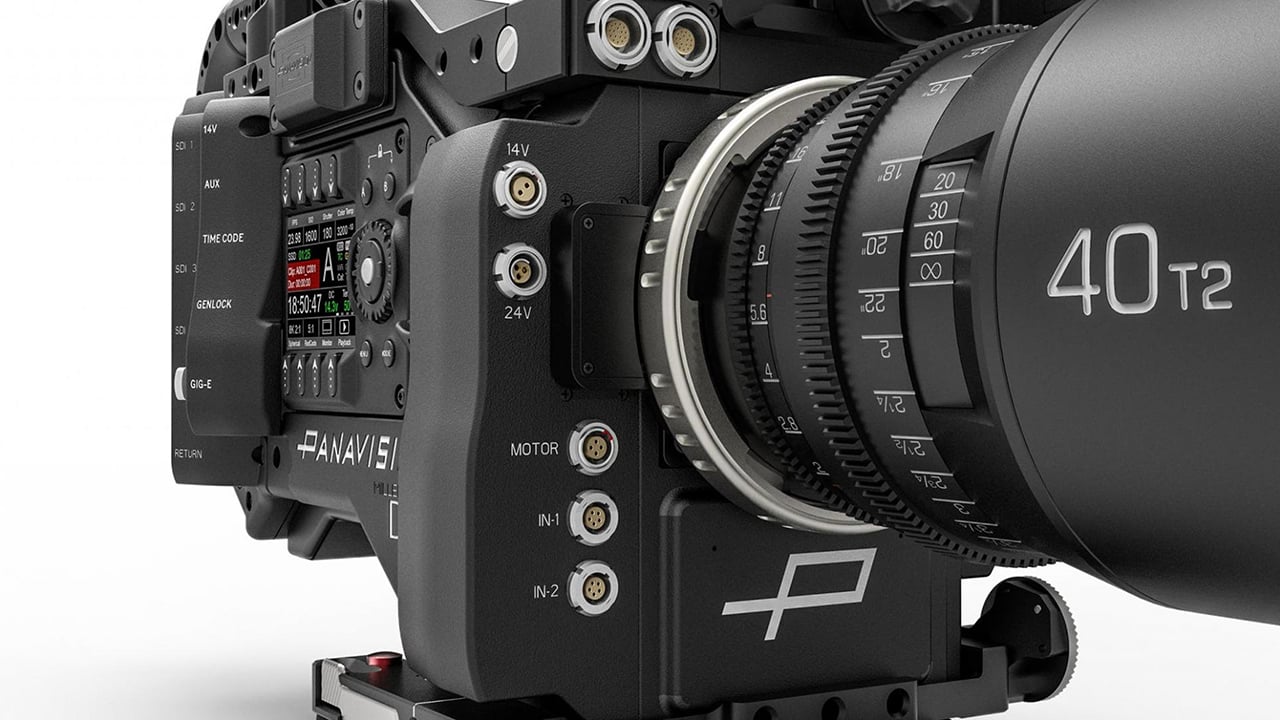 Are you a preservationist? Mark L. Pederson of Off Hollywood thinks filmmakers should follow the example of stills photographers and embrace new technology rather than seeking to resist it.

"The talking picture - how often so absurd ... They drag the infernal microphone around, and there is such an infinity of difficulty and labor that the entertainment is squeezed out" - H.G. Wells, 1931

The film industry is filled with preservationists.

They shoot down new technologies and ideas that are not "ready for prime time" and they are consumed by protecting the established hierarchy and status-quo driven by low tolerance for risk, fear or the short term desire to protect existing revenue streams. If you work in the business, you are one - or you work with many every day.

It is amazing that in a story telling art form that is so truly limitless and magical there are so few innovators? So few long-term thinkers. So few Soderbergh's. And yet ... so many soldiers of the status-quo.

But here's the thing. It's very simple. Read this three times slowly:

Technology has - and will continue - now at an even more accelerated pace - to change the way we make and consume moving images. It is as certain as death and taxes.

Unless you live under a rock, you have read an article or participated in a discussion about HIGHER RESOLUTION in imaging. All those K's. 4K ... 6K ... 8K ... and beyond. I've heard every argument against higher resolution imaging for years and I can say with absolute certainty that EVERY argument against "more K" is highly flawed.

If you are resisting more resolution, you are a soldier of the status-quo. You are being a preservationist. Period. And I'm calling you out.

But there is hope. You can think different. And I'd like to offer some context for you to contemplate.

First of all, when I hear people say or post the comment online that "we need more dynamic range, we don't need more resolution", or "better pixels are more important than more pixels", etc - I just roll my eyes. My 12 year old son understands, very clearly, that everyone should want MORE resolution and MORE dynamic range. Does anyone say "we don't need better wine - what we really need is better food!?" No. You want better food AND better wine. You might not care .... UNTIL you have tasted both ... but I can assure you that once you have your "standards" change. The bar is raised. Which leads me to the following point:

Nobody will lower the bar

I bought the first iPad. I loved it. I bought the first iPhone. I loved it. I did not think, when I got those technologies that I really needed a higher resolution display. I thought the looked just fine. Good enough. aka Status-quo. I did not think that really needed a "RETINA DISPLAY". Nope. Because when products shipped, they had what was considered "high end" for a consumer product. But eventually APPLE released the rentina display. They raised the bar. And I bought an iPad with a retina display. And after 2 or 3 days ... I couldn't even look at my "super-8" low resolution iPad anymore.

"That much resolution is stunning. To see it on a mainstream device like the iPad—rather than a $13,000 exotic monitor — is truly amazing, and something I've been waiting more than a decade to see. It will set a bar for future resolution that every other manufacturer of devices and PCs will have to jump." - Former Microsoft employee Bill Hill, an expert on font rendering

Of course there are a ton of other simple examples. I grew up watching SD Television. 480i. I thought, as a kid, as a teenager, that this 480i SD TV was awesome. I never looked at the screen and said ... "if only I had a higher p or more K." I didn't say "this interlacing is so annoying. I need progressive imaging".

And yes, there is a chicken-egg dynamic with content. If there isn't enough compelling, high quality, high resolution content to watch nobody will care. And while status-quo soldiers can complain about NETFLIX mandating 4K native imaging with a list of cameras approved their NETFLIX products - I can tell you I had a religious experience watching Godless on my new LG UHD HDR OLED.

Nobody will lower the bar on image fidelity. Period.

One of the reasons we have such powerful, inexpensive GPU's is because the gaming market is massive and because we have BOTH Nvidia and AMD. They are in a constant slug fest - trying to improve and make a cheaper and more powerful GPU. Competition ALWAYS benefits the consumer. If AMD did not exist ... I am very certain that Nvidia would be charging more money for less powerful cards and games would not be as amazing as they are today. And I can assure you that ARRI would still have not made that ALEXA MINI if RED did not make the EPIC DSMC camera. And we'd all be paying a LOT more money for high end moving image cameras.

It's easy to get caught up in the Chevy vs Ford or ARRI vs. RED brand loyalist arguments and social media mud slinging. Hell ... even I like to throw mud at BlackMagic from time to time (well ... most of time). But the fact is ... we NEED competition to push the bar higher.

Things are different now with respect to technology. It's moving forward FASTER. And AI and machine learning are going to have such a massive impact on technology development that it's pretty hard to even imagine all the impacts. All those years that ARRI and one or two other companies SLOWLY, GRADUALLY improved mechanical performance, reliability, noise and framerates of motion picture cameras ... that slow progression is over.

Technology is moving faster than you think.

Remember ... things change. Love the companies you love for the reasons that matter to you. Not because of mob law on social media or the bar after wrap. Keep an open mind. Ask questions but validate with your own personal tests.

I find a pretty big difference in the baseline mentality of industry professionals - with respect to technology - across what I call the "film generation factor". Old school vs. new school.

When RED released the RED ONE camera, before the ALEXA existed - I worked with, and supported many very established cinematographers who had never shot on digital. Ever. A few of them are some of the most highly respected members of the ACS. Some had a very easy time making the transition to digital. And I often learned as much or more from them than they did from me. Some did not. But in every case when it was "difficult" there was resistance present.

The stills folks get it

Over the last decade I have often found it fascinating and maddening that so many film folks struggled with RAW. How big iron post facilities (previously known as "the LAB") struggled so much with processing RAW digital images and then I visit a fashion shoot and they have a person rocking RAW images in Capture One software and Photoshop in front of clients. Not so much anymore - but for several years there it was a total shit-show. So, I asked some my friends in the stills world why photographers are so comfortable with RAW and why the transition for that world going from film to digital RAW was so much smoother and easier than for moving images and a few laughed at me and told me the transition was also a bit of a "shit-show" but they just got there first and knew it was the future. And leveraging the power of RAW is easy if don't resist it.

And while you might find experimental or niche photographers who shoot with pin hole cameras or large format poloroid, etc. - you will be hard pressed to find a still photographer who doesn't want MORE resolution. They are rocking 100 megapixels TODAY.

They love all that K. No "resolution deniers" in the stills world. Nope.

Think it's a "fad"? Do you have S35 lens investments that motivate you to be a preservationist?

Ever notice how many high-end professional stills photographers (and most own many cameras) choose to primarliy shoot medium format? Hmmmmm ....

Most still photographers don't share the same level of "encumbrances" and limitations that cinematographers do. They get the advantage of really focusing on ... the image. They need to tell their whole story in one single frame. If you want a crystal ball into the future of moving images - just follow the still photography world. Basically, every technology you see in the stills world will make it's way to moving image capture. It's harder of course. Bandwidth, processing power, etc. But if you see it (light field, etc) in the stills world you can be assured that eventually it will be in digital moving image cameras.

If you don't think we will get to 100 megapixels in a moving image camera .... you are being FOOLISH.

Take a look at the Hasselblad Instagram feed to see what all that resolution and medium format imaging looks like on a mobile device.

"The bigger the over sample at the source, the better the down-sample at the playback. This isn’t about “seeing every detail” pertaining to resolution, rather seeing every detail pertaining to color, dynamic range, magnification, and perspective - all of which require more resolution to capture, then ultimately display. You can see the point being made if you subscribe to the Instagram feed of Hasselblad, which is a .6K display of an image captured between 60-100 megapixels." - Michael Cioni, Light Iron - a PANAVISION Company

The stills folks get it.

There will be more

You don't have to love all this technology and change. But you certainly can not stop it.

Don't be a preservationist. They never win in the end.

Death, taxes and more megapixels. These things are certain.

Article reproduced and edited by kind permission of Megapixels.io.